I'm no expert in diving, let alone the highly professional craft of saturation diving – and for those of you interested in this underwater activity, there are plenty of articles out there. As far as I am concerned, what we will be discussing here is a super-robust, ISO-6425 certified, 300M rated, professional dive watch. Made by Orient. And, which has acquired a cult of followers over the years. 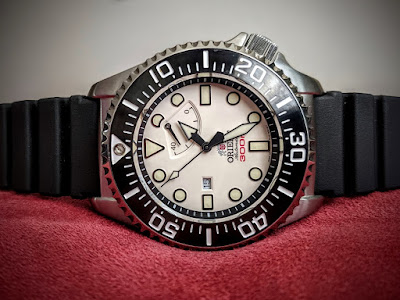 The Orient Saturation Diver (OSD for short) is 45.7mm wide, 55mm long, and 16.6mm thick – including the 5mm-thick(!) sapphire and bezel. It's been through a few generations, keeping its external dimensions and pro-diver specs:

And finally, the 3rd generation (released around 2015) included references WV0101EL (black dial), WV0111EL (red dial), and WV0121EL (white dial, as seen here). It appears very much identical to gen. 2, except for the shape of the hands, which changed from syringe to a kind of sword and broad arrow hands – which I think are really more suitable for this kind of dive watch. 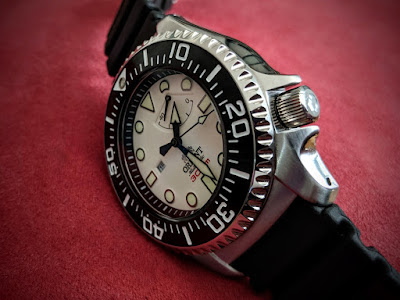 A good friend recently let me borrow his OSD for a few days, so I had a chance to get more personal with this legendary beast. This watch arrived in very clean condition, however missing its original bracelet.

So, how outrageously huge and awkwardly hulking is it really on the wrist? Well – not as much as some might have you think. Yes it's big and heavy, and needs to be worn fairly tightly to avoid becoming a wrecking-ball-like pendulum on your hand, but when strapped firmly to my 7.25" wrist it was noticeable yet perfectly comfortable. 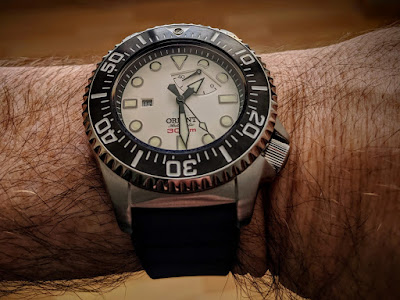 And what about the quality, so raved about by owners? Yep, it's definitely there. Crown operation is buttery smooth, and locking and unlocking it is one of the slickest I've encountered in any watch - quite different from the more basic Orient divers.

The bezel is thick and grippy. Turning it feels weighty and reassuring, like turning the latch of a submarine door (at least that's how I imagine it. Never actually opened a submarine door). 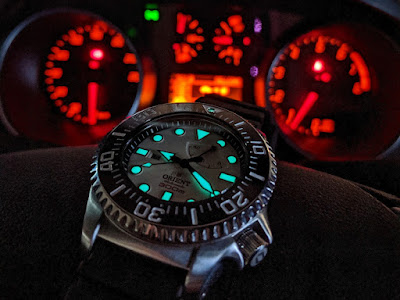 Needless to say, as photos make it very clear, the watch is as legible as can be – and as a professional diver should be. Hands are properly wide are stand out thanks to black framing against the white dial. Markers are big and bold. And then there's the lume, of course, which is very potent and remains effective for a long duration.

Accuracy is more than acceptable. I've measured a +11 seconds deviation in 24 hours at rest, but hardly one second gained after about 10 hours being worn on the wrist. Meaning, it'll probably do about +6~7 seconds per day in mixed use, which is quite good and similar to what most Orients are regulated to offer. 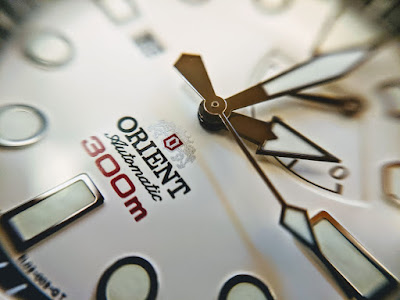 To summarize, the Orient Saturation Diver is definitely a special timepiece, full of character and very capable. It will probably be less comfortable for wrists 7" and under, but for people who like and want a bigger watch that's got heft and good looks, it makes a very appealing offering.

I think the black-dial variant is probably the most solid-looking version, but personally I prefer the white one (as reviewed here) – which to me seems more elegant. And then there is that super-cool yellow dial, and the all-eyes-on-me red and orange ones.

Enough to choose from. And while the OSD has been out of production for more than a year, one may still come across new ones offered by dealers online for around 1,500 USD. Used OSD in very good condition are actually hard to come by, and will typically cost more than 1,000 dollars, but you can find sample in acceptable condition (for this type of watch) at reasonable prices.

And maybe, just maybe, Orient will prepare a surprise for us in 2020, in the shape of a new Saturation Diver containing a new F6 movement?...

Orient Place Blog's Review Contest, which was launched on November 17, today concluded as the final showdown between our two finalists was decided: by popular vote, it was David's review of his Orient Star Titanium that ended up in second place, while Stefan was declared winner with the review of his Orient Ray II. 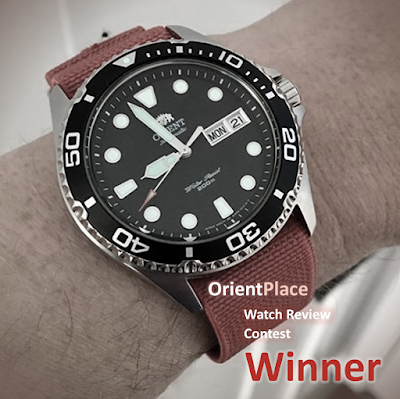 Stefan won with 2 named voters (and a bunch more who voted anonymously), while David got 1 vote. A modest victory then, but the reward is also modest so not a problem. As promised, Stefan gets a 50 USD coupon to buy a strap at Martu Leather, one of our favorite strap-makers, and a small business (that's always more rewarding than a big brand!)

And now that the contest is over, it's back to Business As Usual, and we have to continue to write our own reviews for the blog J ... So, later this month we'll entertain you with a review of one of Orient's most legendary watches of recent decades – the Saturation Diver! 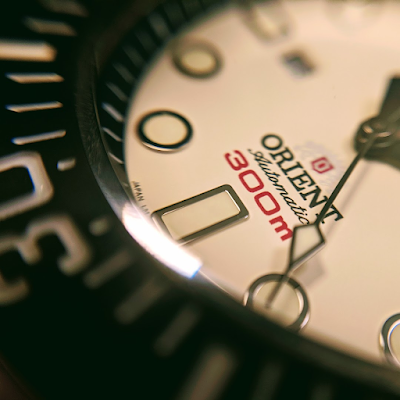 The blog thanks all who participated in our watch review contest. If you enjoyed this and our other stories and posts, please follow this blog – you'll be getting the best Orient-related news, stories and reviews. You can also follow by liking the blog page on Facebook at https://www.facebook.com/OrientPlaceBlog

And so, we reach the final stage of our review contest… for your consideration below are two great reviews submitted by blog readers David and Stefan.

Now it's your turn! Vote for your favorite review - the one you've found most enjoyable, helpful, professional, or any other reason. To cast your vote, simply comment below on this post, write the reviewers name – either "David" or "Stefan" – and if you'd like to add some comments or compliments, feel free to do so!

The contest will be open for voting exactly one week, between now and Sunday December 8, noon CET. At that time, we will count the votes each contestant received, and announce the winning reviewer. In case of a draw, winner will be whoever got his total vote-count sooner. 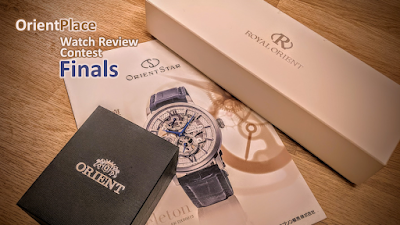 Some watches look unassuming on paper. In the Orient lineup, the Ray II is usually featured near the bottom, after the Neptune, Kamasu, Kanno, and Mako. Few reviewers mention the Ray. The spec sheet doesn't distinguish it from other offerings -- at 41.5mm, it doesn't fit the new trend of vintage-inspired smaller divers, and the movement is shared with many of its siblings. The water resistance is 200m, but the watch is not ISO certified.

I was drawn to the dial, which in my opinion looks cleaner than the Mako's, but my expectations were low. Maybe the Ray could serve as a beater watch. I spent the summer working on the rebuild of my house in Northern California, and maybe it would survive the constant dust, dirt, and abuse. 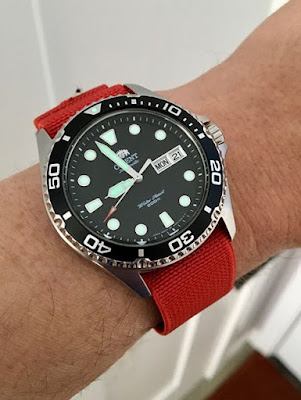 I don't like bracelets, so I bought the Ray on the rubber strap. It's not bad, but I changed immediately to a more comfortable NATO and wore the watch during days at the construction site. After a week, though, I noticed how reluctant I was to take it off. It was big and heavy enough to feel substantial, and yet it also felt perfectly comfortable. Depending on which strap I chose, the Ray turned from work watch to casual companion to dressy sports watch. It felt right in that certain inexplicable way only few watches do.

The case is 13mm thick and mostly polished, except for the brushed tops of the lugs. Dial and bezel insert are matte black. The design is clean, stripped-down. It has a hint of Submariner, but bezel, chapter ring, red-tipped seconds hand, and day/date window give it its own identity. The lume is spectacular and lasts all night; I don't ever have to look twice to read the correct time.

The crystal is mineral, which I prefer over sapphire's blue sheen. The Ray's only weak spot is the signed crown, which for my hands is too small. The F6922 movement, beating at 3hz and with a power reserve of 40 hours, allows for hand-winding and hacking, but the winding action feels rough. It's easy enough, though never pleasant. Good then that I rarely have the need to unscrew the crown. The Ray keeps great time, much better than the advertised -15/+25 accuracy, and I just never take it off. A tool has become a best friend.

I've had this watch since 2016 and to this day I still find myself enamoured by the watch. 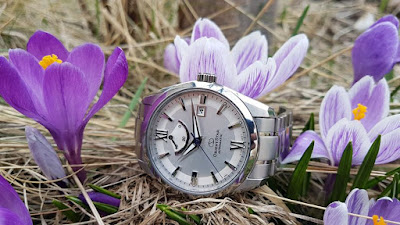 What I love about the watch:

·         Titanium case, case back, bracelet, crown and clasp. The bracelet comes with half-links and has some minor adjustments on the clasp. The titanium has also been treated with a scratch resistant coating.
·         The crystal is sapphire with Orient's Super Anti-Reflective (SAR) coating. At times it looks like the crystal is not there.
·         The overall polishing of the watch is superb. The "Zaratsu" polishing is well done. From the case to the applied indexes and hands, the various combination of brushed and polished surfaces  makes the watch "pop" in various lighting conditions.
·         The dial is flat with silver sunburst and with contrasting radial circles. Overall, the watch is quite easy to read in various light conditions.
·         The metallic blue hands for the second hand and the power meter are my favourite part of the watch. The blue is really beautiful when the right amount of light hits it.
·         Lume at each hourly mark and on the hands. While there isn't a whole lot of lume but, they are certainly legible at night.
·         In house movement: F6N42. This is a 22 jewel calibre that is nicely decorated. It has shock protection, hacks, hand winds and beats at 21,600bph.
·         10atm WR
·         Signed clasp and crown

·         The power reserve indicator design, wish it was more symmetrical.

The Japanese are definitely the masters of light. The overall fit and finish of this Orient Star certainly punches above its price range. From the watches I've personally examined from Hamilton, Tissot to Oris as well as the Citizen Grand Signature none can match the overall presentation of this Orient Star.