There are many reasons to be fond of vintage watches. Words like "legacy", "history" and "tradition" often come to mind, along with clichés like "they don't make them like this anymore" and "watch industry today lost its soul".

The thing I like about Orient's old models is how wearable many of them still are. Their robust, reliable movements keep ticking with minimal maintenance, their looks are usually just as cool now as they were 40, 50 or even 60 years ago, and many of them are quite sizeable – their divers from the 1960s and 70s in particular are more than 40mm wide and offer significant wrist presence even by today's standards.

The Grand Prix "Almighty" 64 might not be such a beast diver, but it nonetheless remained perfectly wearable; in fact, it is a wonderful dress watch. 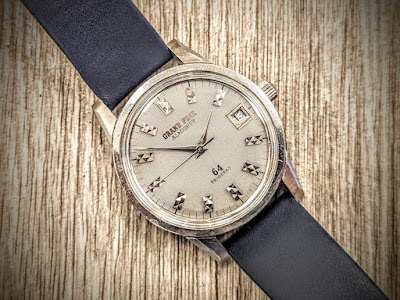 As promised at the end of my last blog post, discussing Orient's Grand Prix line, today I'll be presenting my personal Grand Prix. It is a fairly recent addition to my collection, acquired about three months ago.

The full name of this model would be "Orient Grand Prix Almighty 64 Triostat" but let's keep it short, and just call it GP 64. So what's this GP 64 like in real life? 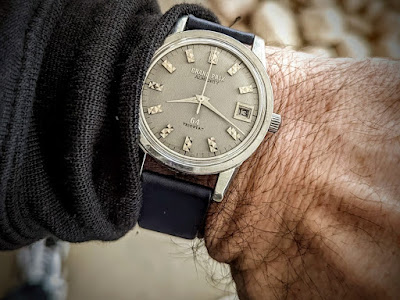 The GP 64 immediately stands out with its unique dial, which somehow manages to be both glitzy and elegant. Most noticeable and eye-catching are its multi-faceted hour markers. These are designed to capture light even in mostly dark environments, enhancing the legibility of the watch – and in well-lit spaces they really glitter and shine.

Complementing the lovely markers are curved and faceted dauphine hour and minutes hands, and a purposefully-bent seconds hand. It is a high quality set of hands, clearly designed to enhance legibility. 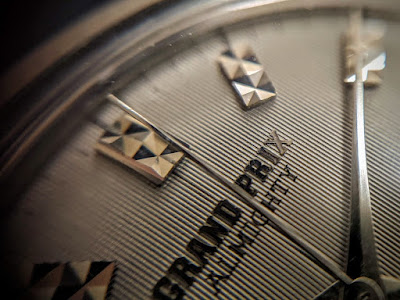 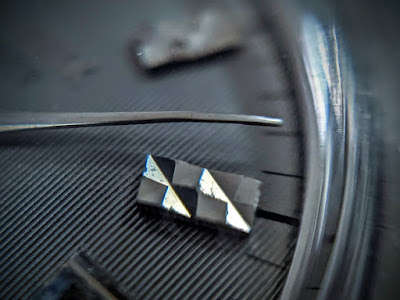 The dial itself is cleverly textured, appearing to change its color from dark grey to a light shade that is almost like silver. Well, it probably is silver. A close look at the dial shows it was both horizontally brushed and vertically grooved, which probably adds to the complex way it interacts with light. 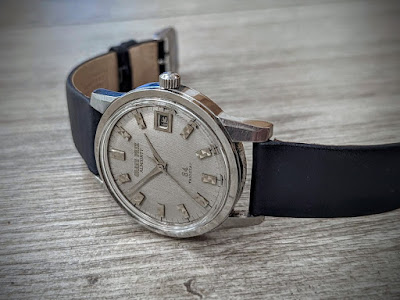 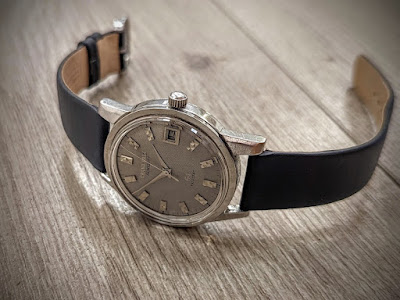 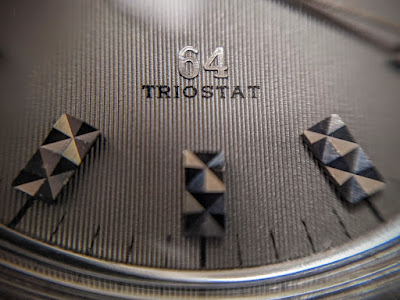 The LCW movement inside runs great, indeed it has been serviced by the seller. It winds sweetly and maintains its power reserve well, and does not stray far from its original chronometric level of accuracy: it gained about 9 seconds in 24 hours, mostly while lying flat - it actually did not gain more than a second during 10 hours on the wrist. Service or not, this is really incredible for a watch that is nearly sixty years old. Keep in mind, most of us would be happy with a vintage watch if it's "within one minute per day"…

Speaking of winding the watch… it's funny that I assumed the crown was not signed, but when taking macro shots of the watch for this story, I noticed that the crown was actually signed! The logo was naturally eroded after decades of use, but when examined closely it can still be seen. 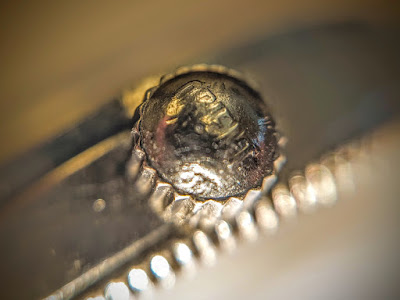 Unlike some watch collectors, I try to avoid watches that I would not actually wear – if not outdoors, then at least in the office. I do not keep "safe queens". And indeed, the GP 64 is no exception.

Back when it was new, the practicality of this model was obvious: Its Pellaton mechanism made sure it was efficiently wound; its time-keeping was accurate thanks to the Triostat regulation; and it had proper shock absorption thanks to Incabloc.

Nowadays, the GP 64's wearability is further enhanced by its dimensions. At 38.5mm wide (without the crown) and 47mm long lug-to-lug, it hits the sweet spot for dress watches. This is quite impressive, considering most dress watches in the 1960s wear closer to 36mm.

The watch is about 13mm thick with its tall box crystal. If one was looking for a slimmer watch, it would probably be possible to shave off a couple of millimeters by replacing it with a flat crystal; but I find this quite unnecessary. It looks great just the way it is. 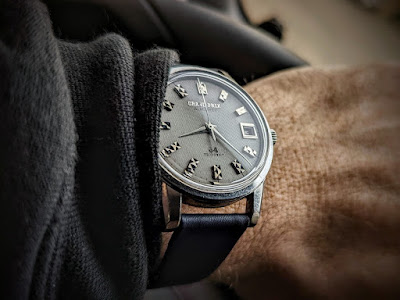 It's easy to see why this watch was a flagship of the brand in its youth; it is still a magnificent timepiece today. It functions just as good as any modern dress watch – a lower power reserve being its only drawback against current watches – while offering unique looks and, yes – soul.

Today, prices for a Grand Prix "Almighty" 64 vary greatly, and I'm seeing items ranging from around 500 USD to more than 2,000 USD. Understandably, there's no price-list for such a watch, and the asking price would be affected by elements such as mechanical and external condition, and having an original case back and an original bracelet.

Last September, Orient introduced their latest line of "Diver Design" watches. So called to avoid being confused with professional dive watches (like the M-Force), these have already been given the nickname "Kamasu 2" by the public.

Now, Orient is presenting a couple of new references of this model, and surprisingly - in their Japanese announcement they refer to it as "Mako" - despite being quite distinct from the old Mako. In fact, this line up is most recognizable by having the hands of a Mako 2, the dial of a Ray, and the bezel and sapphire of a Kamasu... and of course, that "vintage lume" that is unique to this model. 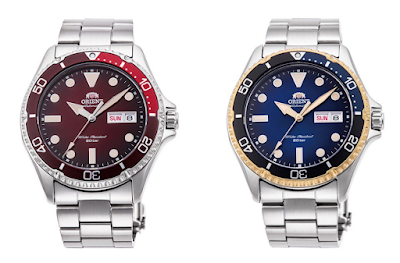 Whatever name you prefer to call it doesn't really matter - what's important is the new references, and we have two of those.

First up is a watch with lovely blue gradient sunburst dial and a blue-and-black bezel, which is presented both as a Japanese and a global reference. The JDM version, ref. RN-AA0815L, is limited to 600 units, while 2,800 units of the global version ref. RA-AA0815L would be produced. 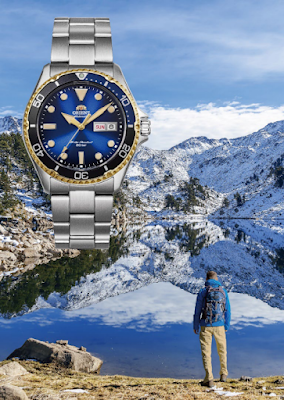 The second version is presented only as a global reference, RA-AA814R. This one has a deep-red, or burgundy, sunburst dial, and a unique burgundy-and-brown bezel. Production of this version is not limited.

Both versions share their overall specifications, similar to previous references of this model: 41.8mm case width, 46.8mm lug to lug, and 12.8mm thickness. Both feature the familiar Kamasu 22mm wide steel bracelet, and are powered by Orient's caliber F6922. 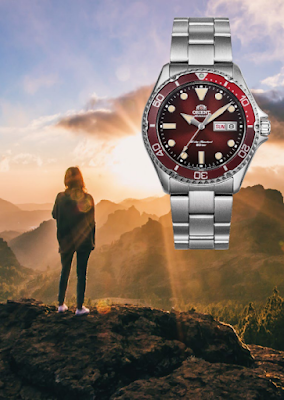 Official prices are in the region of 350-400 USD, but similar to previous models you're likely to find them online at 300 or less. 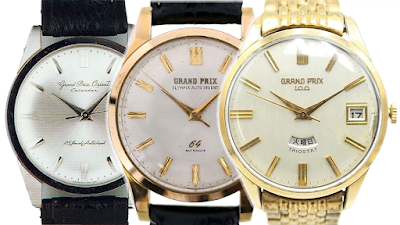 The Grand Prix was one of Orient's first attempts at producing a truly high-end watch. In the early 1960s, Grand Prix models incorporated the best mechanical ingredients available to the Japanese watchmaker at the time, and were priced accordingly.

Between 1961-1963 Orient released a few models named Grand Prix that made use of movements commonly utilized by the brand, albeit in a higher quality grade than elsewhere. Later in 1963-1964, flagship Grand Prix models received dedicated movements. 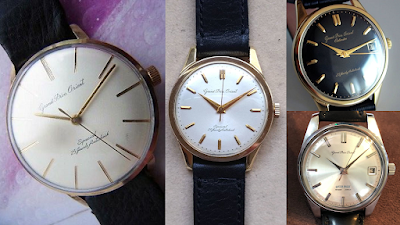 First up was the "Grand Prix Special" with its classic, time-only dress watch design. Inside was Orient's N-Type caliber, also used in Jupiter and Royal Orient models since the late 50s. However, the Grand Prix version had 25 jewels – more than even the top Royal models featured – and was significantly more pricey than the Royal.

Other early models, also carrying various versions of the 25 jewel Cal. N, included the Grand Prix Calendar and the Shower/Water-Proof. 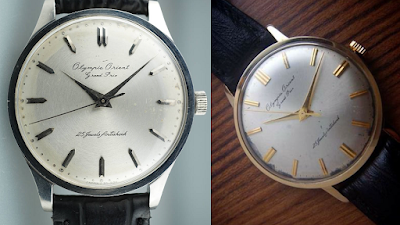 Soon after came the next generation of Grand Prix watches, now based on the new L-Type caliber. This more modern architecture was the start of Orient's longest lineage of in-house movements, extending as far as the 46 and the current F6 caliber families.

The first L-Type based Grand Prix added the respectable "Olympia" moniker to its name. The Grand Prix Olympia used a hand-winding movement, with versions having between 25 – 30 jewels. And yes, jewel count is a big thing in this story, more than in most of my blog posts, for a reason… just wait a few more paragraphs. 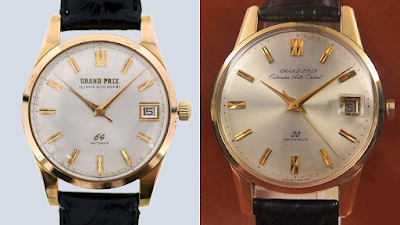 In 1962 Orient presented its automatic caliber LCW, based on the L-Type design but with one highly significant addition: a Pellaton-type winding system. This mechanism provided greater efficiency, and better isolation of the gear train against shocks, compared to other automatic winding systems back then.

The new movement was fairly large (30.3mm), whereas most other Orient movements measured between 26-27mm. This resulted in some relatively large timepieces, making modern-day collectors happy with their utterly wearable, contemporary dimensions.

The first Grand Prix to put the LCW movement to use was the "Calendar Auto", soon followed by the Grand Prix Swimmer and the mighty (though not just yet "Almighty") 64-jewel Grand Prix Olympia Auto. Indeed, this was the time when the battle of "who has the most jewels" reached the shores of Japan. 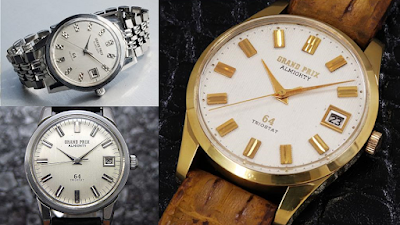 In 1963 things got epic, as Orient announced the new "676" version of the LCW, developed exclusively for the Grand Prix line, with incabloc shock protection and Triostat fine regulation, so called for enabling the adjustment of three parameters affecting accuracy.

This, combined with the Pellaton winding and reduced rotor friction thanks to two dozen jewels along the perimeter of the movement, resulted in a watch that was both very efficient and highly accurate – within Chronometer standards. It was indeed worthy of the name "Grand Prix Almighty 64". 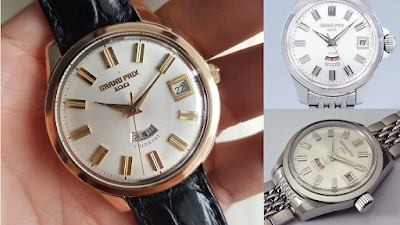 Then, in 1964, someone over in Orient's product design team must have realized there's still some room left for more rubies. The new caliber LCYW emerged, this time with the addition of a week-day wheel and 36 more jewels (which, I suppose, the buyer received in a separate bag, as images of the movement definitely do not reveal their whereabouts).

All this magic was put into the final edition of the Grand Prix, simply named Grand Prix 100. It was the world's most bejeweled watch, and the brand's most expensive model (it took five years for any other Orient to come close, in terms of price). 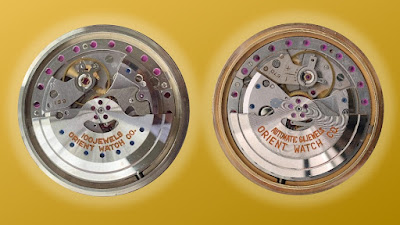 It's worth noting that some Grand Prix models also had gold-filled versions, which typically are more valuable and less common than gold-plated watches. This even included a white-gold filled watch that used silver as its base plate – a rare and rather luxurious combination, which I believe was not available in any other Orient ever made (and you're welcome to correct me if I'm wrong!)

So – this is the story of Orient's Grand Prix watches. Later this month, I will follow up with a closer look at one particular Grand Prix from my collection.

Pictures of the various watches that appear on this post were taken from old sale ads.