The watch we're looking at today is not of any particular importance in Orient's history. It does not represent some unique milestone of mechanical achievements, and it is not listed as one of the brand's hallmark models, the sort that Orient's current designers look up to when seeking inspiration or searching for the subject of a re-issue project.

It is an utterly lovely piece in my opinion, though, which is why it ended up in my collection. Ladies and gentlemen, I would like to introduce the Orient Olympia Calendar Swimmer. 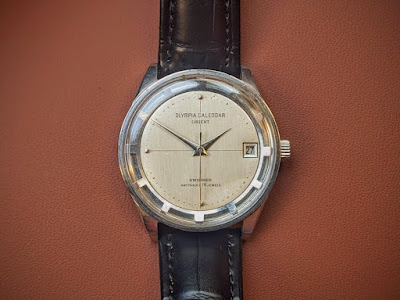 First, let's explain some of the terminology that makes up the name of this model.

Olympia was a name introduced by Orient in the early 1960s, perhaps inspired by the upcoming 1964 Olympic Games in Tokyo. It was applied to a fairly large range of watches, as a middle tier in terms of price and quality below Royal Orient and legends like the Grand Prix 100, and above more basic models.

The Calendar term was added to identify models featuring the then-new date feature, which was also introduced to Orient watches in the early 1960s.

The Swimmer label was given to watches dubbed as "waterproof", prior to the introduction of proper dive watches. The standards for water resistance were not fully established at the time and related terminology still fairly obscure. However as some of Orient's early divers that emerged in the 1960s were marked 40m, a "swimmer" would likely be rated at 30m, or 3 ATM at best. Less of a "near-diver" then, and more "dress watch you don't need to take off when washing your hands". 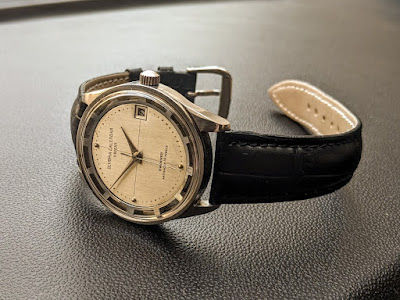 The Olympia Calendar Swimmer came in different shapes during the 1960s. This specific specimen has a number of recognizable characteristics that I like.

The case is type I-19868, featuring a "case within case" design. The overall dimensions are 36.5 mm width without the crown, and 42mm length lug-to-lug. A similar, slightly larger case type was also being produced but I find this 36.5mm version perfect: the unique construction really makes it look larger. 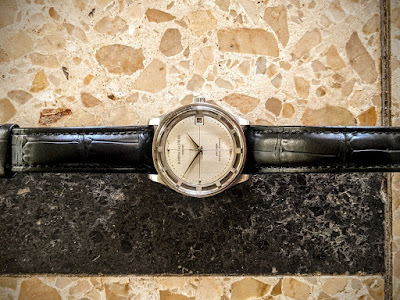 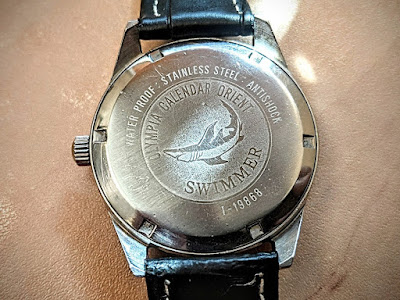 The dial has a gently brushed texture and a unique warm shade – I'm not 100% sure of its composition, but it could be brass. I feel like the unique punched-in minute markers and protruding hour markers add lots of character to it. And I definitely love the crosshair mark! 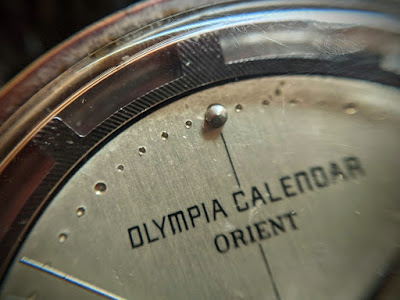 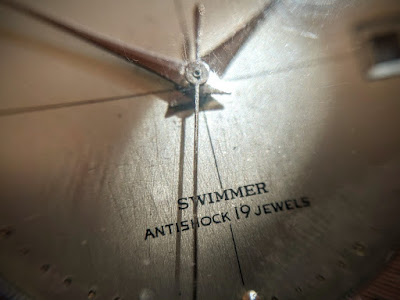 The movement inside is an LC-type manual winding caliber, featuring 19 jewels. L-type (including LC, LCY) movements replaced the T-type and are generally considered good and reliable, which can serve the watch owner for many years before requiring service. This one here was running too fast when I got it, but my local watchmaker had no trouble fixing it and regulating it to keep good time, in 55 +/- year old watch terms, within 20-30 seconds a day.

On the wrist, this Olympia is a joy to wear. I have no difficulties pulling it off as a decently-sized dress watch, despite being used to much larger watches. Its unique shape does draw attention even from people just mildly enthusiastic about watches (I say this from experience…) 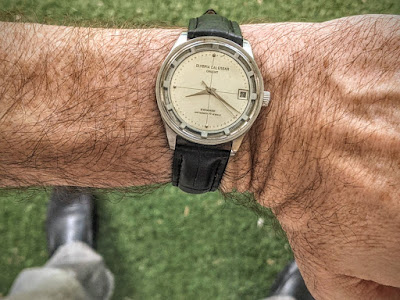 Asking price for this sort of watch would typically be in the range of 250-400 USD, depending on its condition and seller's whim. I find this reasonable for a perfectly wearable, good looking vintage piece.

Keep in mind the Olympia range is quite broad, so don't be surprised if you see different Olympias, like the Grand Prix or Diver, listed at much higher prices. 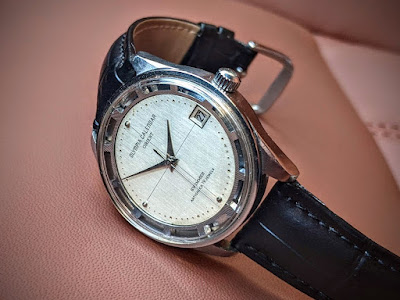