A few months ago, I thought it would be cool to find a watch with a football theme (association football, that is) – mainly, one with a bezel for counting the 45 minutes each half of the game is played – for no special reason other than love of the sport. And I wasn't specifically looking for an Orient.

Later, I found out two things I was not aware of. The first: that most Japanese call the game Soccer, like Americans, not Football. The second: that once one starts searching eBay for a Soccer Watch, rather than Football Watch, one might find the rare vintage piece that is the Orient Soccer Watch. 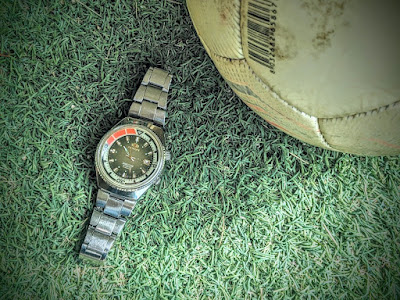 Okay, you might ask, what is the big deal? Isn't this just a diver-style watch where the first 45 minutes on the bezel are colored slightly differently?

Well yes, and no. Technically you would be correct in asking this. But take the more romantic approach, which is how watch collecting should generally be viewed, and you'll see the difference. I mean – it does say "soccer" very clearly on the dial! 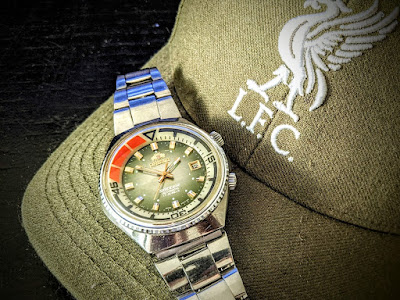 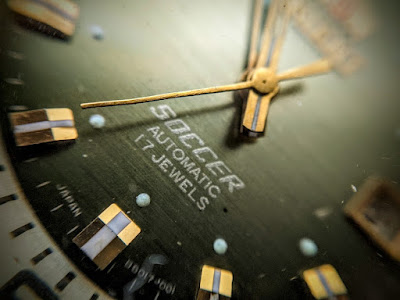 What we have here is a fairly large, sporty watch. The steel case measures 45mm across, not including the crowns, and 49mm lug to lug. This model dates back to the 1970s, and like many sporty Orients was probably considered pretty large at the time. Even by today's standards, it is quite big and hefty.

The size definitely does not make it any less wearable. As its overall length is moderate, this watch should look good on most wrists – referees and couch-footballers alike. 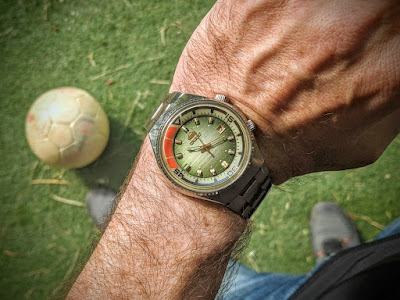 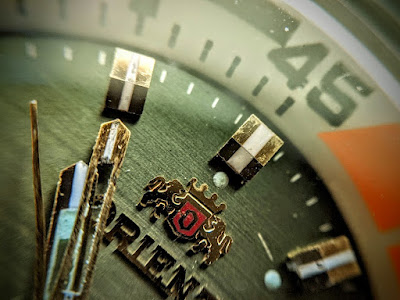 The inner rotating bezel can be turned using the crown at 2. Unlike a diver's bezel, this one is bidirectional. The idea is that you'd simply set it to where the minute hand points at the start of each half of the match, to know when time is up.

The movement inside this watch is caliber 16720. This one never became as popular as the 469 workhorse – perhaps lacking some of the latter's renowned reliability – but it does have some advantages, such as setting the date from the crown. In fact, you can set the date both back and forth, a rare feature.

Winding, setting the date, and setting the time, are all managed using the crown at 4, when in first, second, or third position respectively. 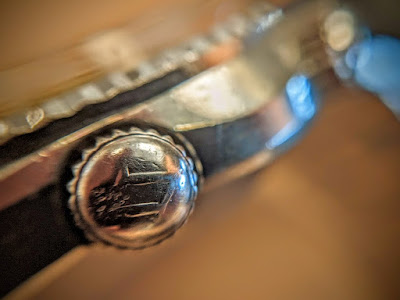 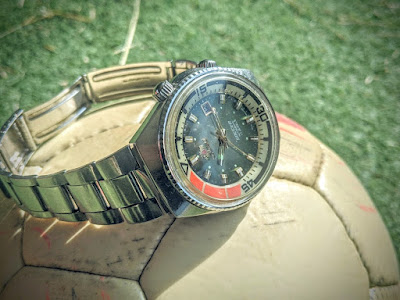 A cool watch with a cool movement, then. Not the rarest Orient ever, but far from common. These seem to pop up at online stores once in a while, with asking prices generally in the range of 200-300 USD, which is reasonable for a well-kept watch. 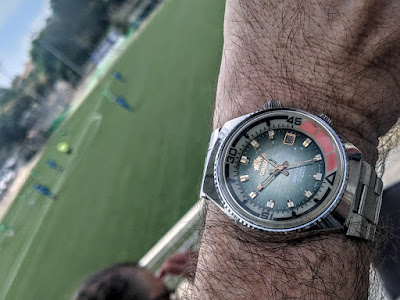 The Orient Star Classic is – as its name implies – a classic, and one of the brand's best-loved models. Featuring a traditional dress-watch style, without an open-heart or any Orient quirkiness, it might look almost too simple at first look. Is it? We're here to take a second, and a third look… 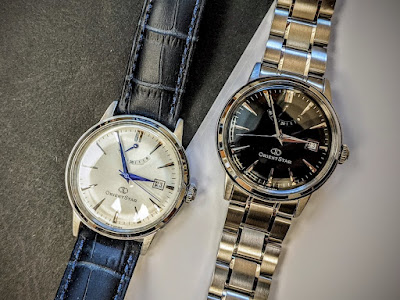 The OS Classic is one of a very rare breed of Orients that have gone through movement upgrade while retaining their looks, and the two generations of the models are practically indistinguishable when viewed from the face side.

The first generation Classics were powered by caliber 40N52 and are characterized by the letters "EL" in the reference (e.g., the black-dialed EL05002B). The first OS Classic models using this movement were launched in 2011.

The second generation, which is also the current one, was introduced in 2017. It is being powered by cal. F6N44, and is characterized by letter "AF" in the reference code. 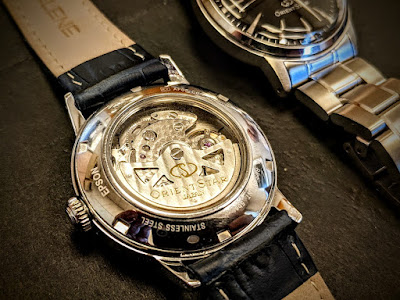 Interestingly, the specs of both models are very similar, despite the F6 being the more modern movement. They are all 22-jewel movements that provide 40+ hours of power reserve and a stated accuracy of +25/-15 seconds per day, and offer both automatic and hand-winding as well as hacking.

For this review, I examined two watches from the current crop – one black dial ref. AF02002B that was left on its original bracelet, and one white dial ref. AF02003W attached to an aftermarket (but well-matched) blue leather strap. 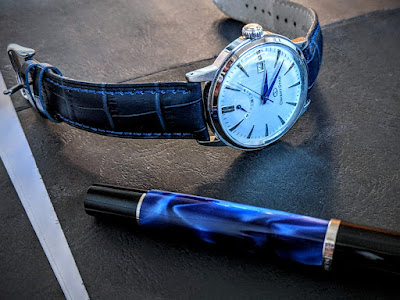 Other than colors, these watches are identical: a 38.5mm wide case, modest 44.5mm lug-to-lug, 13mm thick, and 20mm lug width. Water resistance is 50m, and the crown does not screw in. Both front and back crystals are mineral.

While the bracelet adds a certain everyday sportiness to the style, these are true dress watches at heart. This becomes most obvious when the watch is put on a leather strap. 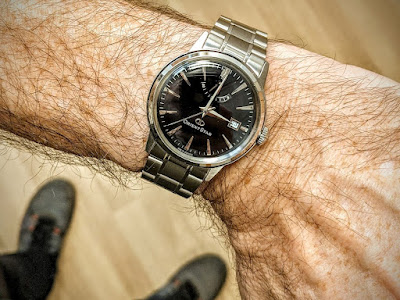 Whether on steel or leather, the OS Classic wears comfortably and looks great on the wrist, whether it is a 7+" circumference like mine or considerably smaller wrists. That is a distinct advantage of the moderate case size and the conservative design.

Upon closer look, the quality of Orient Star manufacturing shows clearly. This is no "Cheap Grand Seiko" (as some like to think), and does not boast the elaborate finishing present on some of the more expensive Orient Stars. However – the case is well made and finely polished, the dial, markers and hands are sharp, and the bracelet is very good. 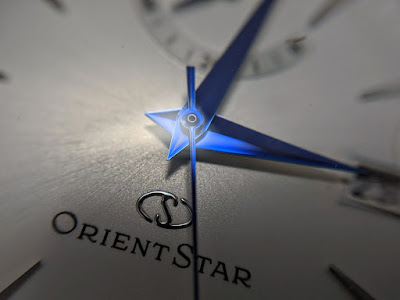 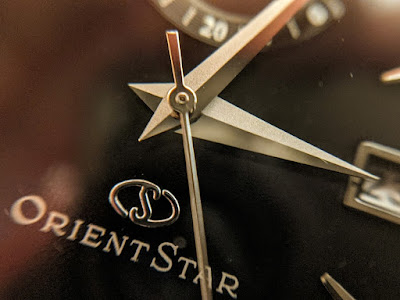 The movement is also nicely decorated for this price point, with a bit of perlage on the bridges and Geneva stripes on the rotor. Nothing too fancy, but it adds some purpose to the exhibition case-back.

Speaking of movement, the accuracy of both watches reviewed is around +15 seconds. Nothing amazing, but within specs. This is how they left the factory - I do feel that a decent watchmaker would be able to adjust them to better accuracy. 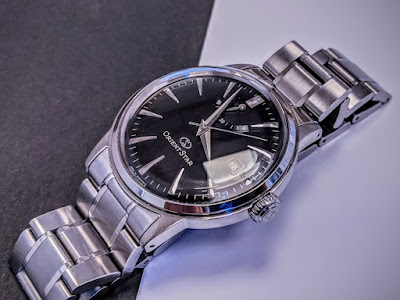 The MSRP of these Orient Star watches is a little over 500 USD, but they usually sell for under 400, and if you try hard enough you can find some in even better prices. Now considering the quality and reliability you're getting, this is seriously good value.

One last point to consider: not long ago the review of Orient's Bambino was featured on this blog. A fine, inexpensive dress watch from the same brand as the OS Classic and that offers generally similar esthetics (on some of its versions). One might therefore be excused for asking, what are we paying for when we're adding 200 dollars or more for the Orient Star?

Well – in this respect I can point out quite a few differences in favor of the OS:

·         The Orient Star features drilled lugs, which many watch collectors like.

·         The Orient Star offers more classic dress-watch dimensions, and its 38.5mm width is considered a sweet spot for many buyers.

·         Some better finishing and decoration on the OS movement.

·         The Power Reserve indicator on the OS is an added value for some – I feel it adds some interest to the dial while keeping it overall fairly clean.

And there's probably a few more minor differences that I've missed. But you get the point: there is real added value in the Orient Star classic, and while this watch is no match to the Bambino's "I can't believe I got such a nice watch for so little money", it is a step up in quality and still belongs deep in the highly-attainable price bracket. 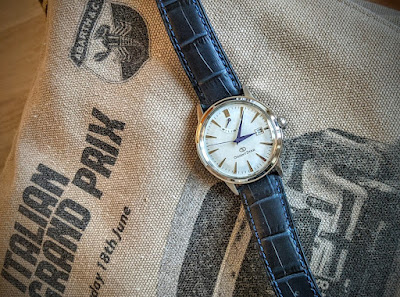 I would like to thank Orient fan and friend of the blog, Mr. Udi G., for allowing me some time to play with, and take photos of, his two personal Orient Star Classics.