What is a dress watch? There are many definitions and opinions, but most would agree a dress watch is an elegant, dressy (duh!) timepiece that generally matches business and formal attire. This category consists of watches that are smaller and thinner than sports watches (so they can fit under a long sleeve), typically wear on a leather strap (that should match one's shoes and belt), and include minimal functionality – so as to fit in the smaller case, and to enable one to see the time at a quick glance (since a long stair at your watch would not be seen as good manners in a formal event). 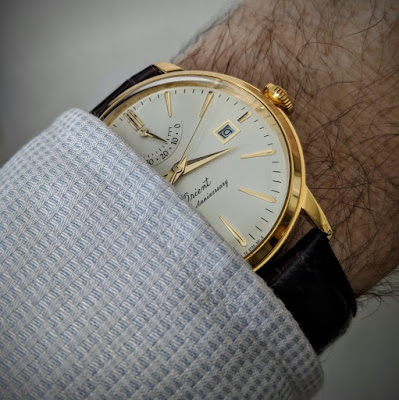 These definitions can be quite limiting. If a watch is to be kept fairly small and minimalistic in design, and avoid obscuring the dial with elaborate decorations and complications, it might seem that differentiating one brand or model from others could be quite daunting. Of course there are still many options to make a specific watch unique – by combination of dial color and texture, hands and markers, case shape and finishing etc. However, generally speaking, it is true that with dress watches, other than with the use of precious metals, making a watch stand out as being of a much higher quality or price-point, when seen at a distance of over a couple of feet, is difficult.

This, I think, is where the opportunity lies for brands such as Orient to excel. Orient is skilled at manufacturing watches at "just the right level of quality" – i.e. that they just look good enough to appear more expensive than they are, but not boasting such unnecessarily fine details that would make them actually expensive. 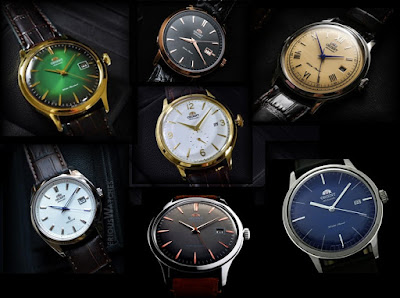 As most of you would know, Orient has indeed seized this opportunity, and has been known for decades as producer of fine dress watches that not only fit under your cuff but also in your wallet. Orient's Bambinos, Monarchs, Symphonies and Howards, to name but a few, are dressy automatic watches that you could buy for less than 200 USD. Slightly fancier models, like the open heart Bambino can be found under 300 USD. And yes, Orient Star models that offer greater "finesse" are available at still reasonable prices, 400 USD or more, depending on the model. You can see a bunch of these Orients pictured above (this one photo is from the net, not all mine...)

Here are a couple of favorites from my collection – the "Oreo" ref. WZ0071DG (that I covered on a previous article), and the Orient "60th anniversary" model ref. WV0021DT (which I'll probably be covering sometime soon!). 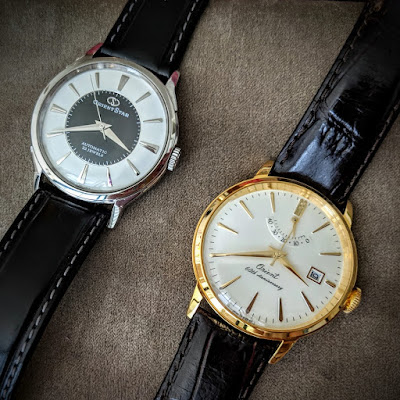 To me, these exemplify Orient's skill at making dress watches. The Oreo is seemingly simple – a time only piece that even the most purist of dress watch aficionados would appreciate – but it stands out thank to the uniquely styled dial combining a black center and a white ring, both having a warm, eggshell-like texture. The anniversary model features an older version of the Orient logo, rendering it slightly more vintage-like, and adding a touch of class to the dial.

One other feature which I believe sets good dress watches apart, is that they would look good in black and white. For no better reason than simply adding to that old-world charm of getting all dressed up in a suit or a tux. 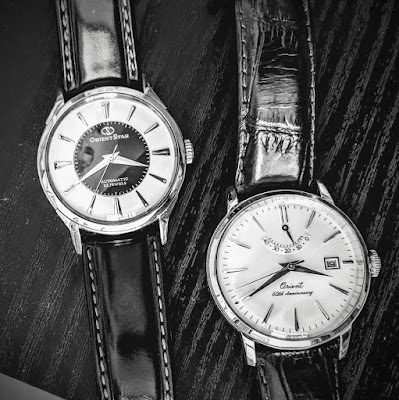 This just works, don't it…

So – what's your favorite dress watch?