If you've been following this blog closely, you would know I have a thing for colorful watches. A skilled designer can use the watch dial as a canvas and turn it into a little work of art.

The Orient "World Diver" was never a part of that artistic category, with most specimens found featuring a black dial. It was originally introduced around 1967 as a very utilitarian timepiece. While it featured a standard 12-hour dial layout, it had a 24-hour rotating inner bezel, and city names printed on the circumference of the dial. By adjusting the bezel to show the time in the city you're in, you could tell the time in other cities. At 42mm without the crown, the World Diver case was considerably larger than most watches at the time, allowing the busy dial to be read with relative ease.

In 1969, however, Orient decided to do something a little bit more special, and issued a version of the World Diver featuring a drawing of a world map on the dial – instead of printing city names. While theoretically providing the same functionality, this was clearly not as easy to use as city names printed in white on black… this was Orient doing its "thing". Art for art's sake. 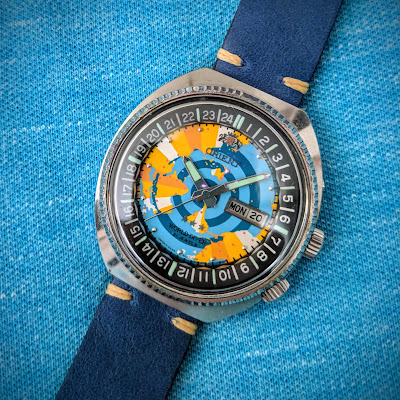 Finding a "Map Dial" World Diver proved to be far more difficult than most watch-hunts I've went on before. There is no information on the number of Map Dial pieces produced, but apparently there were not too many of them. This must have been considered a very special model, as it was even featured in Orient's official 60th anniversary commemorative book, published in 2010.

After a few months of searching, I've finally come across a private collector in Spain who was willing to sell his specimen. After some pleasant conversation and negotiation, I acquired this very unique item. 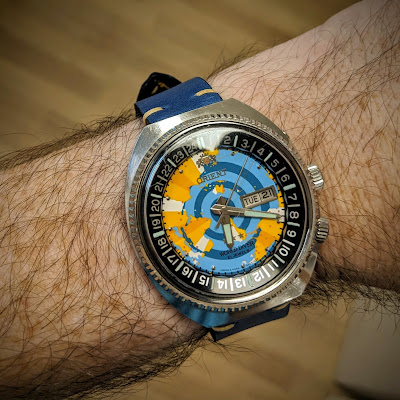 I was not disappointed. This watch was obviously produced to rather high standards. The dial withstood 5 decades with honor, showing no signs of patina or fading – and I must point out that in all the (very few) photos of other Map Dial pieces I saw online, the dial seemed to be in the same pristine state. 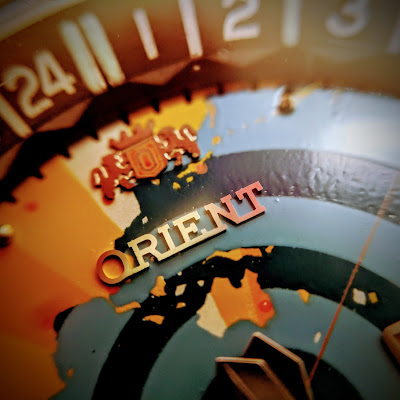 For an engine, the watch uses the highly robust caliber 4694, a 21 jewel, 21600 BPH movement. This replaced the 27 jewel, 18000 BPH caliber 4971 which was apparently running some older versions of the world diver. The caliber 46 family is known to have produced real workhorse movements and this one is no exception, the watch winds quickly and keeps excellent time for its age, within a few seconds a day. 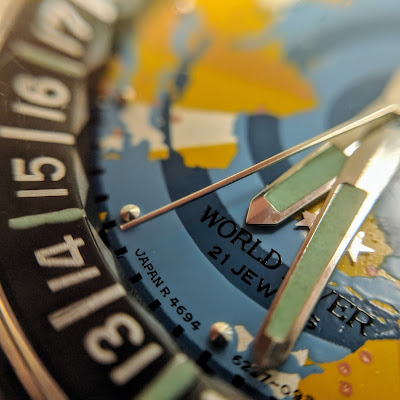 So to summarize, a fantastic watch, its accurate and reliable movement and modern case size making it perfectly suitable for daily wear. It is yet another example of Orient's ability to producing real gems – and also, a great example for how patient hunting pays off in the end!

I would also like to mention the strap featured in the photos. Since the watch did not come on its original bracelet (that would probably be too much to ask for!) I looked for a matching vintage-style leather band, and once again found a great looking and fairly priced item at Martu's online shop. I've purchased a number of straps from this small Chilean business, run by a very talented lady, so happy to recommend it.

Final note for today: I just launched a Facebook page for the blog, where I'd be posting updates whenever anything new is posted on this blog, at: https://www.facebook.com/OrientPlaceBlog