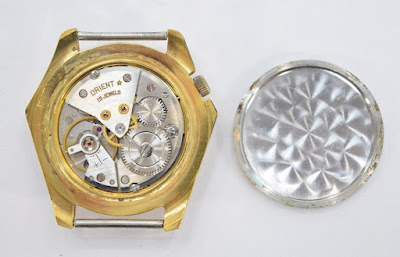 Orient's started manufacturing the L-Type movement in 1961, as a replacement to the N-Type. It was engineered to enable lower production costs, and easier regulation and maintenance, while offering more flexibility in adding complications and components.

While the N-Type shaved off 0.60 mm from the thickness of the T-Type movement that preceded it, the L-Type base (no-date) caliber was a further 0.55mm thinner. At 3.65mm it allowed Orient to produce thinner watches, and add more layers, such as a week-day disc, or even a battery.

Calibers from the L-Type family were produced in a great variety of price levels, with jewel counts starting at 19 and going up to 30 in "normal" watches (and lots more in the Grand Prix models).

The L-Type was celebrated by being introduced along with a new family of quality watches, the Olympia. All Olympia models that followed used some variation of the L movement or other. Yet, this caliber was also implemented in a number of other models. 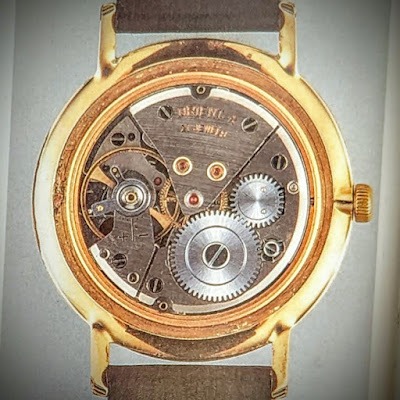 The first version of the new movement was simply, caliber L. A hand-winding, time only movement, that powered the new Olympia watch – at that stage still an elegant yet simple dress watch, very similar to N-Type driven models that preceded it.

Note that 19 jewel version at that time generally did not include the latest shock protection mechanisms, these were added to higher jewel-count models. 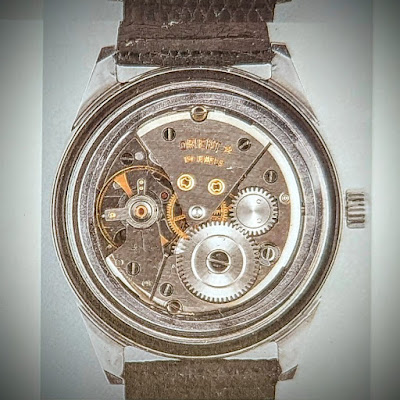 In 1962, Orient presented the Olympia Calendar, and the new caliber LC. "C" would henceforth indicate the calendar function, or date disc, in L-Type movements.

Caliber LC would become Orient's most widely used movement of the 1960s. It was initially used in both dressy and sportier models, like the Olympia Calendar Swimmer, and later on in Orient's first proper dive watch, the 1964 Olympia Calendar Diver. In also featured in various other special models, like the triangular case, or the lovely trapezoid at the top of this post.

A non-Olympia model was also introduced – the "Freshman", which replaced the previous "Youth" model targeting younger clients. It carried the simpler, 19 jewel version of the LC. 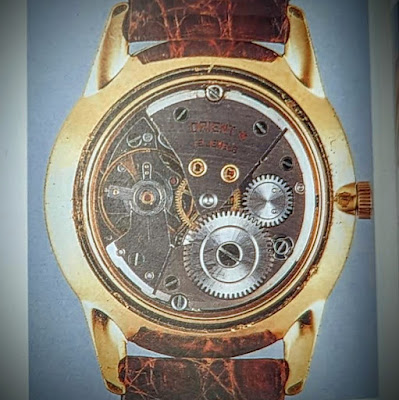 In 1963, Caliber LCY was first to include a week-day disc on top of the date, paving the way to Orient's first day-date model – the Olympia Orient Weekly. Alongside it Orient also introduced the Freshman Weekly – the only Orient that had just the week-day window, but not the date.

The LCY was also presented in the form of a Swimmer model, as well as a rectangular version. 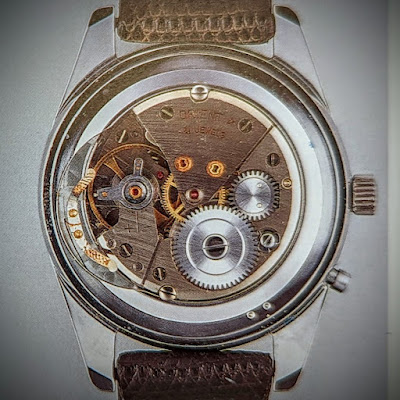 Innovation did not cease in 1964, when the Orient Flash went on sale. This model took advantage of the relative thinness of the base L caliber, to create a watch containing a battery and LED lights that enable night-time visibility and basically, just make for a very cool looking piece of gear.

However Orient’s development of the Type-L movements did not stop at complications and gadgetry. Alongside the aforementioned variants, Orient was working on more important stuff – automatic winding. 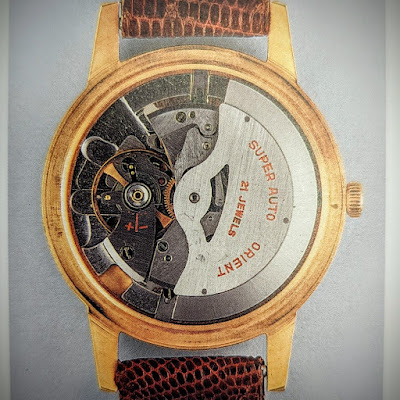 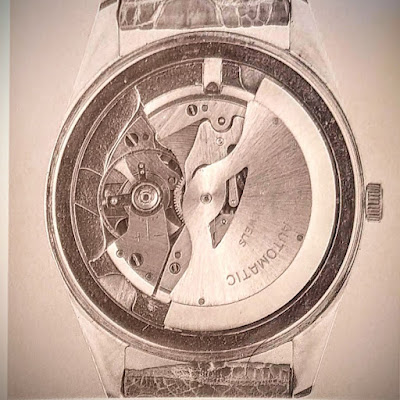 Orient introduced its first automatic movement in 1961, as the “Super Auto”. The following year, as it became clear that the L-Type was the way to go, Orient simply borrowed the Super Auto’s efficient self-winding mechanism, and added it on top of the new LC movement to create the caliber LCW – with “W” obviously representing Winding.

You can read more about the LCW’s development into a high-end movement in my blog post about the Grand Prix series. There, you will also be able to read about the LCYW caliber – clearly, a self-winding, day-date movement – which was reserved exclusively for the Grand Prix. 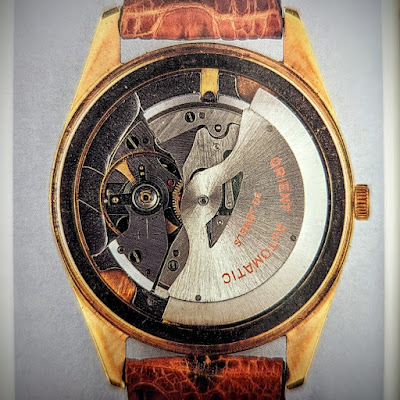 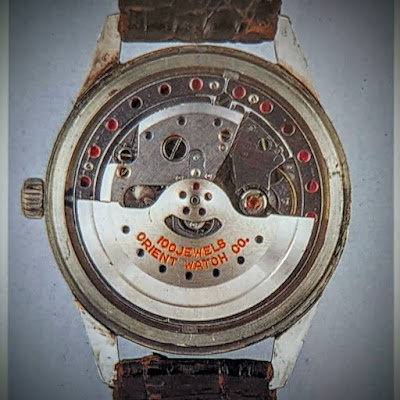 Towards the late 1960s Orient was already developing and manufacturing a new generation of movements. In 1970, production of the L-Type calibers ceased.

Pictures of the L-Type movements that appear on this post were taken from the 1999 Orient Watch Catalog book.

I posted some stories before about Orients with particular case shapes: triangular, cushion, and barrel cases. Now how about rectangles? They're angular and sharp, not soft like cushions, and harder to swallow than round watches (there's a reason why no one's making square pills!). Love 'em or hate 'em, square-cased Orients exist. Let's look at a few examples. 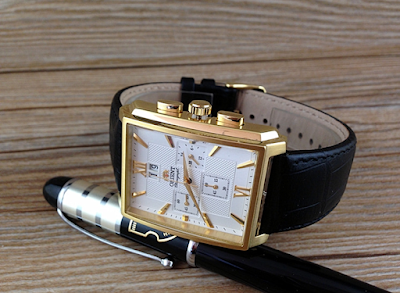 And by "good old days" I mean, the 1960s. Round watches were the more popular option back then, just like nowadays, but Orient did produce a few rectangular models.

In the early-to-mid 60s, it was the Olympia model that ruled the Orient line-up. Orient produced a bunch of square Olympia Calendar models, as well as Olympia weekly versions (which included the day wheel in addition to the date). 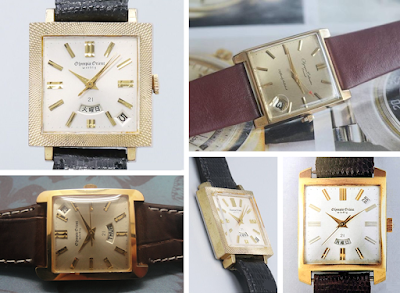 A few years later the "AAA Deluxe" joined the party. AAA's were actually made in a broad variety of shapes, and naturally, a rectangular case was introduced as well. 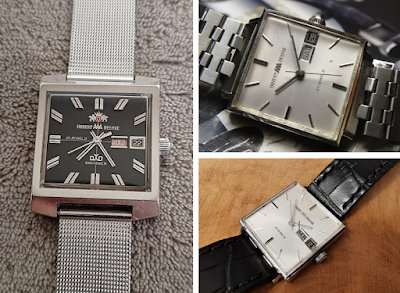 If you are looking to buy any of these vintage models, keep in mind they were quite petite: the Olympia cases were around 30mm, and early Deluxe models around 29mm; later models, like the one with the black dial above, were around 32mm. Narrow rectangular cases in modern watches work when lug-to-lug is longer, 40mm or more, but these older models were not that long.

In the 1980s quartz became dominant in Orient's product range, and among those quartz watches it seemed rounded cases were almost falling out of fashion. Many had tonneau cases, some almost square, and some – unashamedly rectangles. 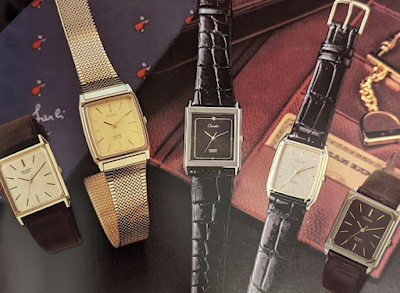 In particular, it's worth noting the EQ line of quartz models. There were some pretty cool designs there, including this very fancy-looking piece. Do note, though, it too is a small watch, and while back then it was designated as a unisex model, today it would be clearly seen as a women's watch at 26mm. 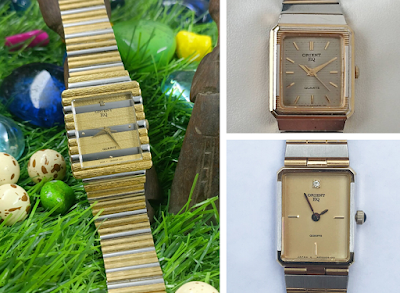 Later, more modern models with larger cases joined – like the nice chronograph at the top of this post.

Return of The Machines

Toward the late 1990s, the automatic movement took back its position as the centerpiece in Orient's line of products. Over the next two decades, numerous designs were introduced that featured rectangular cases. Such were (shown below, from left to right) the "Galant", the "Noble", and the "Producer". 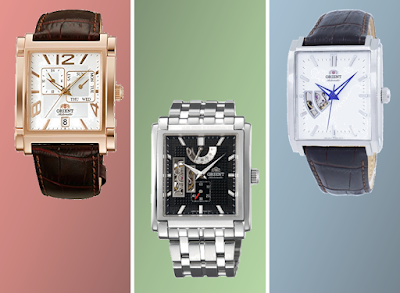 The versions featured above are only a few examples – each of these models was available in a number of dial colors, strap options, etc. They were not small watches, with the common case size around 36mm wide and 45mm long – which, for a bulky square shape, wears pretty large.

More recently, however, rectangular cases have almost completely disappeared from Orient's catalog – along with cushion cases and most non-round designs. The only two square cases now listed on Orient's global website are a couple of Multi-Year Calendars. 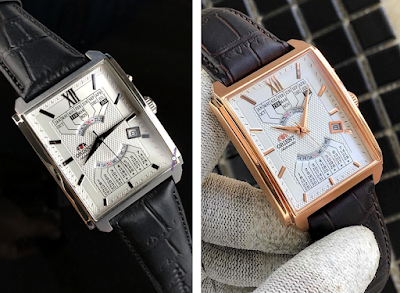 Pictures that appear in this post were taken from old catalogs and sale ads.

The Layered Skeleton watch was introduced in early 2021. When reviewing it, I wondered whether a more standout color scheme would have elevated the impact of its complicated design; now, however, Orient is presenting two new references of this model with an even subtler color scheme than before… 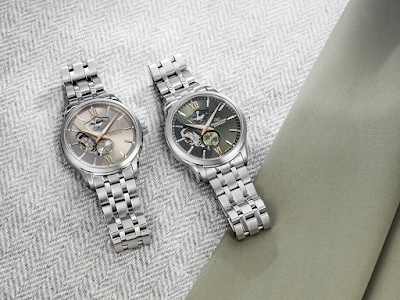 Reference RK-AV0B06N features what Orient is referring to as a "greige" dial, that is a cross between grey and beige. In pictures, the lower layer appears to be more silver-grey, and the main plate of the dial seems a slightly golden shade of beige. Well, however you want to call it, it's a very pleasant palette that combines well with the metal bits of the movement and the gold hands and Roman hour markers.

Ref. RK-AV0B07E is presented as "olive". It's a calm earth tone, more or less uniform across the layers of the dial. Green is generally accepted as a nice complement to gold, and I think that in the case of this more desaturated shade of green it matches the few golden elements even better. 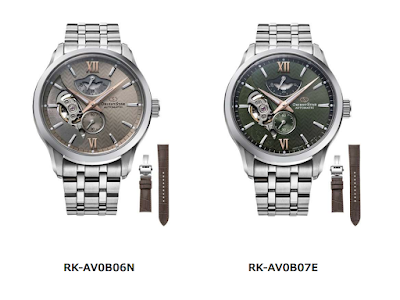 Both variants are technically identical to the older references in the series, with caliber F6F44 beating inside the 41mm wide case. Both new models include both a stainless steel bracelet, and a leather strap.

The new watches are JDM, and are exclusive to the new Orient Star online shop. They are priced at around 700 USD at the current rate of the Japanese Yen, which is almost 10% more than other Layered Skeleton watches – including the Prestige Shop version that also includes an additional leather strap.

I'm not sure what is the reason for the price difference – but perhaps a positive way of looking at it is, that Orient prefers not to raise the prices of older models (as opposed to many other brands that have increased prices recently) and instead puts higher price tags on new releases. 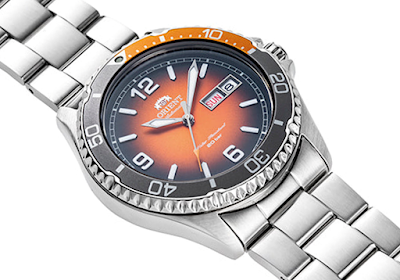 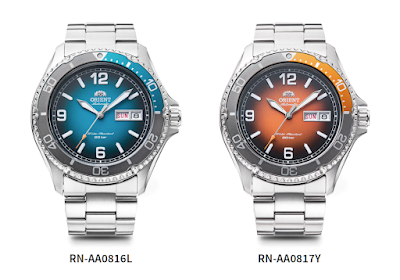