Orient Watches and "Town and Country"

Have you ever come across a watch labeled "Town and Country" where the ad also said "Orient"? Or wondered why that watch's reference looks suspiciously like an Orient's (but with "WS" at the beginning instead of "WV"…)? Well, here below are some answers.

"Town and Country" is a Hawaiian surf brand, a surfboard manufacturer at its core since the early 1970s, which evolved into a lifestyle brand selling a wide range of clothes and accessories. They are known for their "Yin and Yang" logo.

Since the mid 1980s, and as late as around 2014-15 (but not at the moment), Orient has been producing T&C branded watches. Let's take a look at some examples. 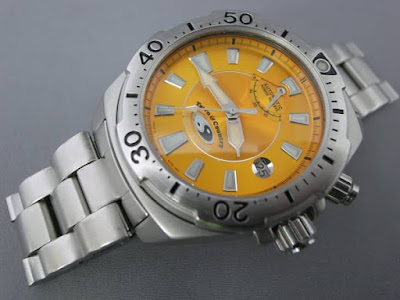 This is one of the more special T&C models, in that it's one of very few that were automatic. Released soon after Orient introduced its first modern movement with a power-reserve indicator in 1996. Two variants were produced – one that had the orange dial as pictured, and one having a blue dial. Hard to find and not 100% Orient is it, but still a true collectors' item! 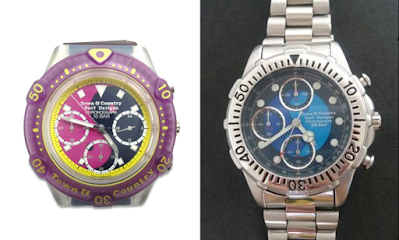 During the 1990s and 2000s, Orient produced numerous chronograph models for T&C. While the information on the earlier models is scarce, it looks like the ones with horizontal layout (sub-dials at 3, 6 and 9) are the older ones offering 1/10th second timing. The ones with vertical layout are newer, and offer 1/20th second accuracy.

The stream of T&C releases continued throughout the 2000s and 2010s, with mostly simple inexpensive quartz watches – analog, as well as digital. Here are some more examples… 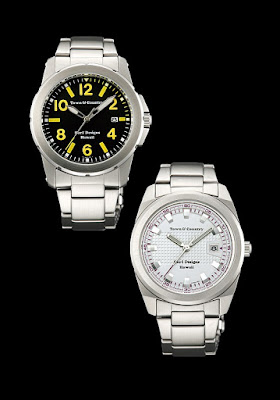 The following ad from 2012 shows "Town and Country Play" models. Here, as in most other T&C models, the designs used the characteristically fun and cheerful color schemes one would expect from a surf brand. 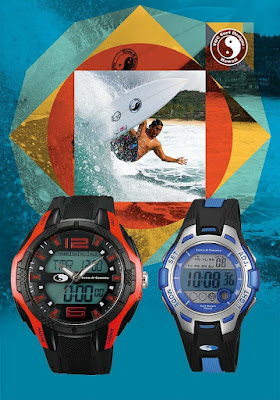 Another line of models from 2012 was "Town and Country Swim" models, offering 10 bar water resistance… 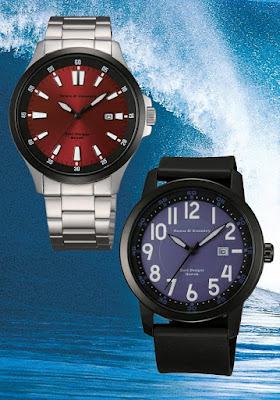 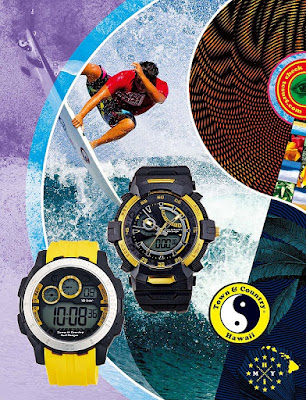 So… no conclusion here really, other than these are real Orients, and if you're into collecting fun, cheap watches but prefer to know they've come from a respectable watchmaker – you can do worse than getting one of these Orient T&Cs.

Watch photos taken from Orient official catalogs and press releases, except the photos of the power-reserve model and the chronographs, obtained from old sale ads.

Blog readers will have noticed by now that after covering a topic in general, I like to give a concrete example. So – having recently discussed Cushion Cased watches – today we'll turn the spotlight onto a very striking example of such a watch, the Orient Star ref. WZ0221ER. 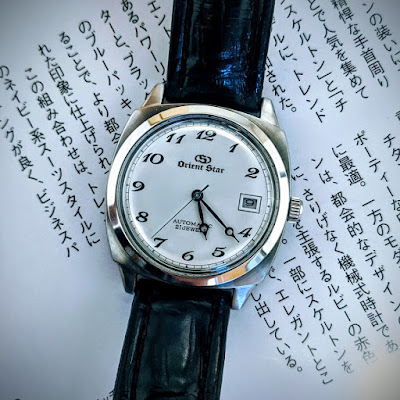 This model was released in the early-mid 2000s, most likely 2004 (though it is hard to date more precisely). It was sold as a limited – but not numbered – edition, available only from select Orient dealers in Japan, similar to today's "Prestige Shop" releases.

Some sportier variations on the theme, using the same case but equipped with a steel bracelet and featuring a 12-3-6-9 dial, were also sold at the time – see references WZ0141ER, WZ0151ER, and WZ0161ER, having a black, white, and a kind of pearl-champagne dial, respectively. 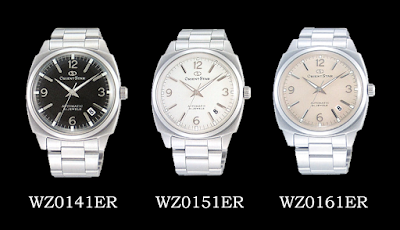 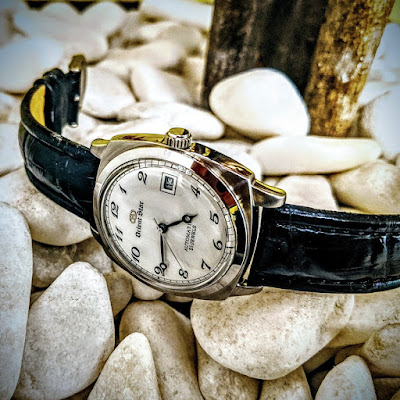 This piece, however, was decidedly dressy. With its classically implemented Arabic numerals and Breguet hands, standing out against the silvery dial, it has a unique style that is both classy and minimalist. Coupled with the black leather strap, this watch is the ultimate dress watch for people who do not mandate that their dress watch has a round case.

Focus more closely on the dial, and its intricate nature is revealed. It's not a simple sunburst silver. The texture is so fine that in certain conditions, it takes on a milky character. When the light is more direct, though, the dial appears more like silver, and the sunburst effect is more evident. 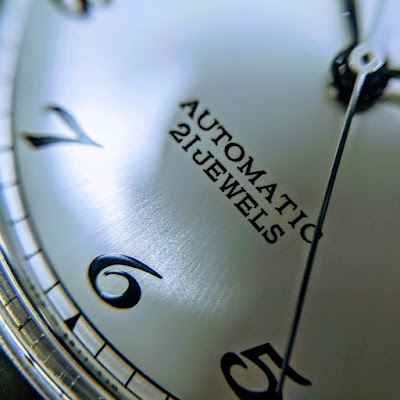 There is another cool effect produced by clever design choices made by Orient. The Second hand is silver and often blends with the background, offering an uncluttered dress-watch-like view of the time. Yet with a slight tilting of one's wrist, it shines back into sight, for when more accurate timing is needed. 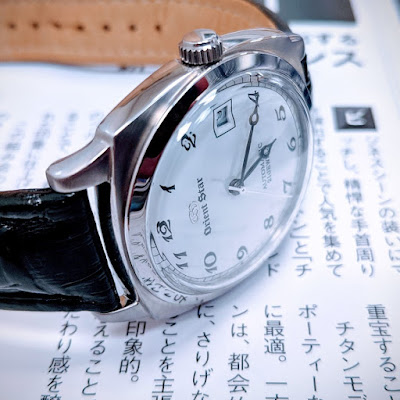 Interestingly, the Orient Star logo used on the dial and case back is the more elaborate variation. Orient more frequently uses the simpler, thin-line version of its logo, and it's not simply a matter of one being newer or older – you can see Orient switching between the versions back and forth over time, sometimes even having the same model change logo during its lifetime.

While Orient also used this elaborate logo in sporty watches, it definitely looks good in this dressy piece – and it further sets it apart from the aforementioned sportier references, which used the more common thin-line logo. 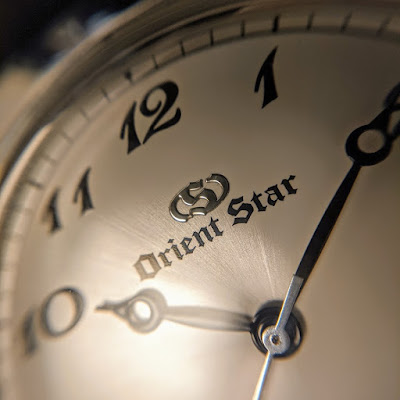 Inside the watch resides Orient's automatic caliber 487 with its 21 jewels and 40 hours of power reserve. It does not hack or hand-wind, but it does have a buttery smooth and perfectly quiet action.

Not all iterations of cal. 487 are equal. In this 48787 variant, the rotor is nicely decorated, and the OS logo is golden. The movement bridges here also have a pearlage application. 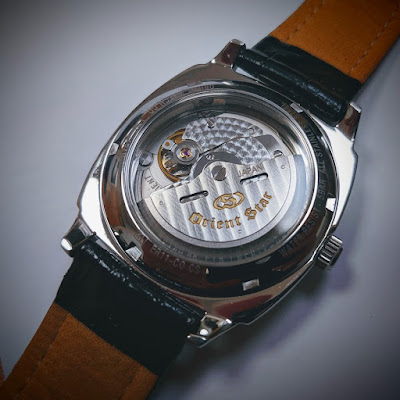 On the wrist, this Orient Star wears like a boss – as expected. It is 38mm wide without the crown, and 45mm long lug to lug, a great size for a modern dress watch. It's a little over 13mm thick including the domed mineral crystal. However, as discussed on that Cushion Cases blog post, the case design creates an appearance of a much slimmer piece. 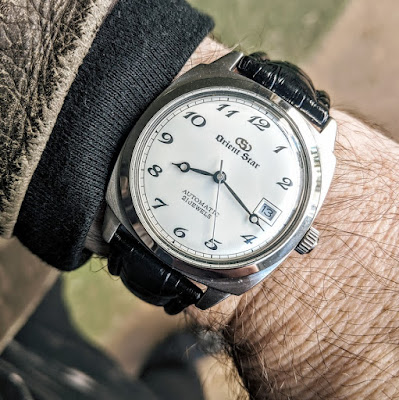 Okay, so you say, "I'm convinced, I wanna have it." Not so fast! This is one tricky piece to find. Most JDM Orient Star of the early 2000s are hard to come by. And this, being limited distribution, is even harder. However, I know of at least one person who was able to buy a WZ0221ER recently (after I got mine about a year ago), so it is not impossible. 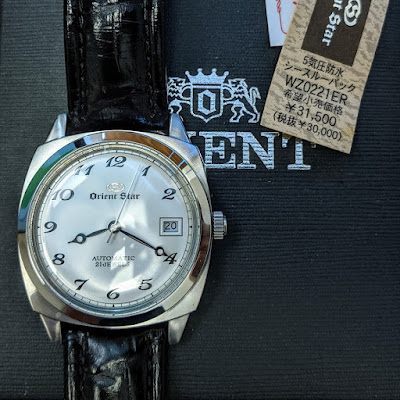 What would be a good price to pay for this model, should you locate one? Again, it's hard to say. I got mine for around 400 USD, almost NOS and tag still on. It felt like a fair bargain, given the quality and rarity of the watch. Still, the nature of rare Orients on sale is such that you might find one in excellent condition selling for 250 USD, or one that is scratched through and through with an asking price of 800…

The cushion case: it's not quite square; it's definitely not round. It allows for a wider stance than tonneau cases, which are typically only a little broader than the strap; it's easier on the eye than right-angled tank cases; and to a collection of round watches, it would add some visual interest and originality.

Despite the above, cushion cases were not very common among Orient designs throughout its history. It appears that they were reserved for "special occasions", usually for dress watches. Indeed, while some brands like their cushion cases big and robust like a Panerai, Orient preferred to use this style with thinner, more elegant models.

Let's look at some examples… 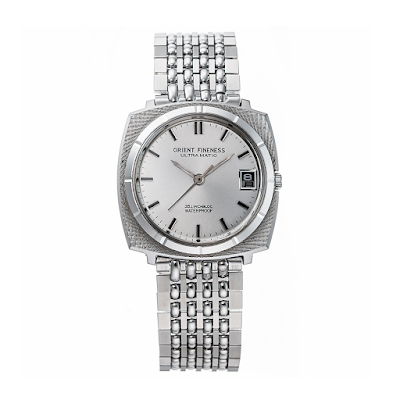 The Orient Fineness, introduced in 1967 with caliber 3900, is a perfect example. This was the world's thinnest day-and-date automatic movement at the time of its introduction (and probably for some time after).

Encasing it in a cushion shape was a perfect way to present the thinness of the watch (even though Orient also released traditionally round versions of the Fineness as well). The unique shape provides further distance for the case to slope and thus for its edges to appear as slim as possible. 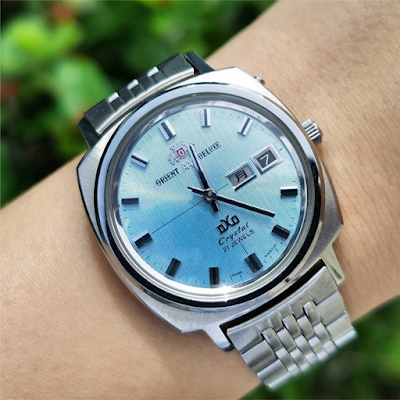 Another line of models launched round about the same time as the Fineness was the Deluxe Orient (DXO), equipped with different variants of the Cal. 49xx family. Some of these DXO's were also presented in cushion shape.

Take a look, for instance, at the lovely blue dialed sample above, powered by caliber 4941. The picture, courtesy of watch owner Anthony Leung shows the effect of the shape on wrist presence. These watches were barely 36mm wide, but the added visual weight of the metal in the corners of the case gives it the appearance of a 38mm piece. 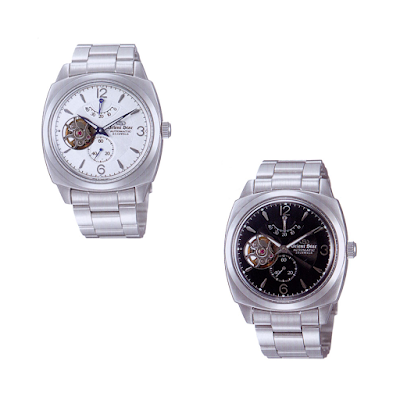 A more recent example can be found with Orient Star ref. WZ0011FH and WZ0021FH. These were the first of Orient's Open Heart watches, presented in 2003.

Here again, a cushion case is used to provide an appropriate framing to a new movement (here, caliber 46S50) and a new design style. Despite this model being far from slim, at nearly 13mm thick, the shape of the case makes it look elegant and distinguished. 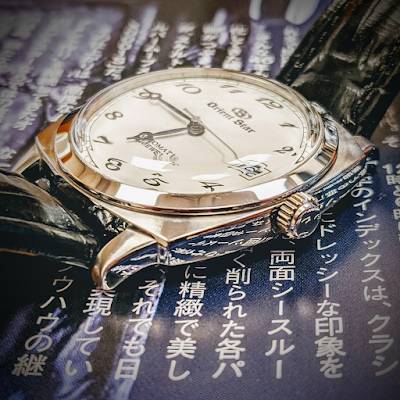 In fact, more cushion-cased Orient Stars were probably presented around the mid-2000s than during any other time in the brand's history. These included references in the ER line (time and date), EZ line (power reserve and date sub-dial), and NR (smaller versions of ER and PF models, for women or young buyers).

Consider for instance the reference WZ0221ER pictured above. It's a beauty for sure, and we'll dedicate a blog post to it, soon. For now, look at the low profile of the sides of the case: The overall thickness of the watch is almost three times the height of the case side, but viewed at an angle, where the thickness would normally be very obvious, it just disappears. The watch presents a perfect slip-under-your-cuff slenderness, just like a dress watch should.

Orient's current line up does not include any cushion case models. Would you like to see a new cushion-cased Orient Star dress watch? Tell us what you think, in comments below, or on our Facebook page!