Some names that pop up repeatedly throughout Orient's history bear much weight, like King Diver, M-Force and Royal Orient. Others seem to just float about, light and foamy, without drawing too much attention. Such is the name Jupiter.

Because it is such an unassuming side note in Orient's chronicles, not much has been written about it. But still, there were enough nice Jupiters produced over the years, it's worth mentioning a few of them.

We'll start off, rather surprisingly, with the most recent of them. The relatively-modern Orient Jupiter was a rather faithful rendition of one of the 1950's model – in fact it was so faithful, Orient even modified one of its then-current automatic, time-and-date movements, removed the date wheel and rotor, and squeezed it into the authentically small 34mm case of the reissue. 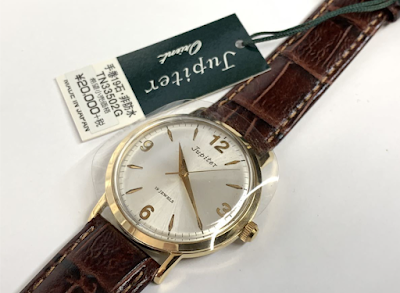 Honestly, other than its minute dimensions, this is a lovely watch. Now in hand-winding guise, a "19 jewel" text decorates the dial instead of the usual "automatic", and the crown's "ghost-position" in-between winding and setting the time reveals its movement's origin. 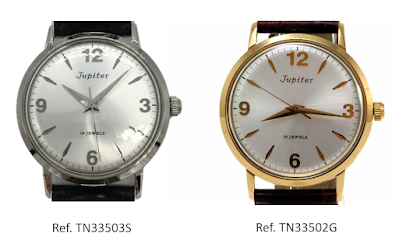 The original Jupiter of the mid 1950s was not much different, if we can imagine it being clean and shiny (not many photos now exist of shiny 1950s Jupiters…)

Also measuring 34mm across, with a simple yet elegant dial, this was positioned below the Orient Star models of that era. And speaking of Stars and Jupiters, Orient must have been looking to the sky for names then, as that was also when an even more obscure model by the name Mars Orient was produced.

The original Jupiter with its T-type movement was replaced in the early 1960s by a new "showerproof" model, containing the newer N-type caliber, still with no date function. 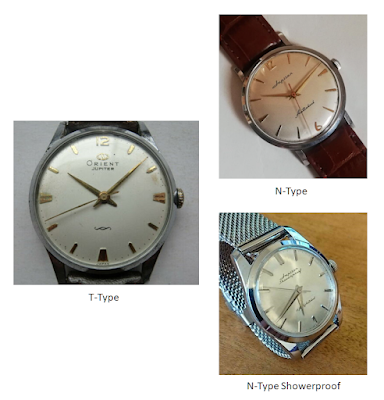 Between the 1950s and 1990s, the Jupiter name was occasionally attached to different models, both automatic and quartz. Among those were a diver, some dressy models, and even a couple of curious looking moon-phase models having a fairly un-orient-like design – which might have been the reason for branding them "Jupiter" (with no mention of Orient on the dial).

So this was a brief review of a name of no particular importance in the history of Orient… but still, one that might yet be of interest for a collector of inconspicuous old watches.

Pictures of the various watches that appear on this post were taken from various old sale ads. 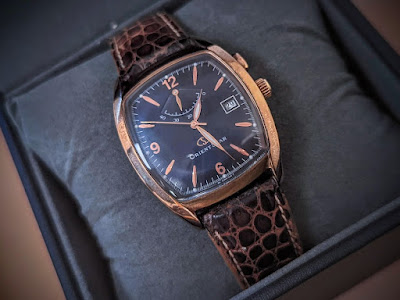 Different watches have different unique qualities that define them beyond their mere technical specifications. For me, the quality of the Orient Star WZ0081EJ is simple: since receiving it a couple of months ago, I just look for every excuse to wear it. This old beauty is just so darn adorable. In fact, pardon me for the comparison, but it reminds me of Cartier watches in how it just wears so well with everything from jeans and tee to suit and tie.

But before we dive into the details, let's take a step back for a bit of history. 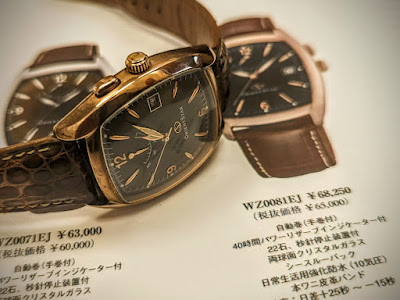 The WZ0081EJ was part of a series of models presented by Orient between 2007-8 that was powered by caliber 40G, and which included references with both round and tonneau cases.

The 40G movement is an unusual beast, as it included some of the features of new Orient movements, while still retaining some elements of old. Most notably, it is the only Orient caliber to feature both manual winding and second-hand hacking – like all the more modern movements – and the old click-button for changing the date. 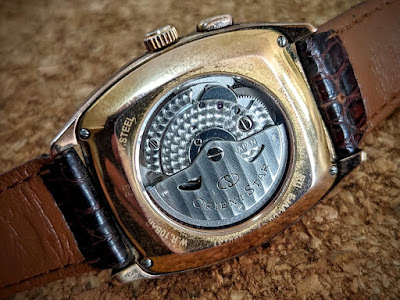 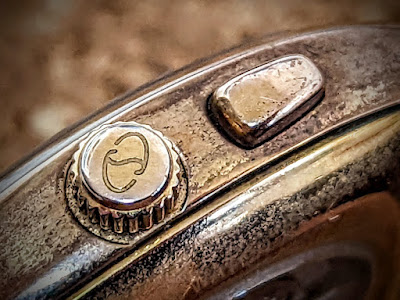 The specific reference at hand was curiously the more expensive of the series, at around 600 USD – despite coming on a leather strap while most of the other versions included a steel bracelet (which usually costs more). Indeed it was good quality crocodile leather (not the aftermarket strap shown in photos here) but that's still rather unusual, and seems to be attributed to the special rose-gold coating and dial paint.

Speaking of coating and paint… I'm not sure if the piece I got was put through too much hard work, or that the coating applied was not the best quality, but it definitely lost much of its original golden haze in favor of a rather patinated-bronze appearance. Honestly, I'm not complaining – maybe I'm too much of a sucker for the brand but I just like how it looks now. Was this degradation of the color intentional? Who knows. 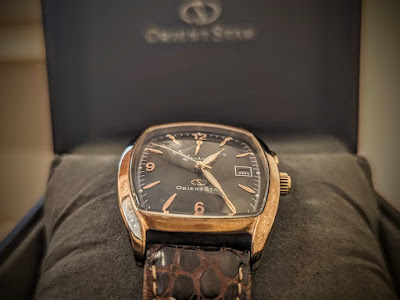 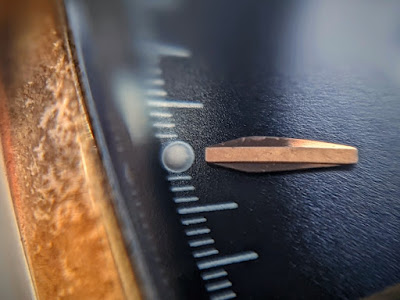 And, still on the subject of paint – you can see the eggshell texture of the dial. It's this texture that makes the dial color a very confusing one… It's blue, and it's also black. It's the miniature shaded areas that make the face of the watch look dark, almost black, most of the time – but when the light hits it right, it turns blue.

All in all, the combination of rose gold and dark blue really works beautifully. Even the white date window does not bother me too much, as it matches the white lume on the hands. It's not just a pretty sight, but also very legible, from every angle, and even at low light. 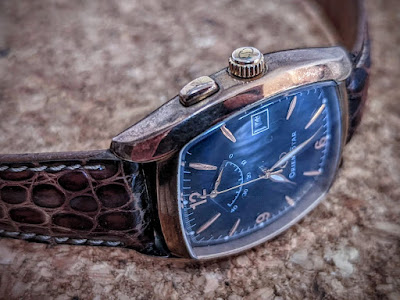 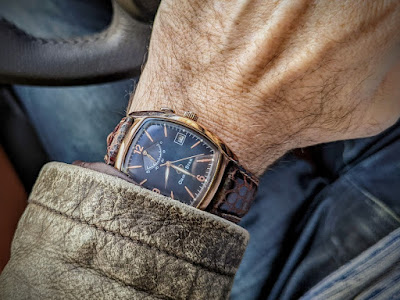 On the wrist, it is superbly comfortable. The 38mm wide case sits flat, and while it's fairly thick at its center (13.1mm) it slopes from end to end and side to side, contributing to its elegant appearance.

But beyond all technical details, there's that quality I've described in the first paragraph. Like a true Orient, this watch is full of charm – some of it comes from what are obviously intentional design choices, and some of it is just that mix of strangely aged coating, new and old movement features, and that air of timelessness that surrounds it. It is somehow both modern and vintage. 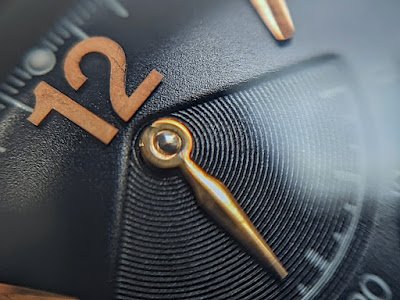 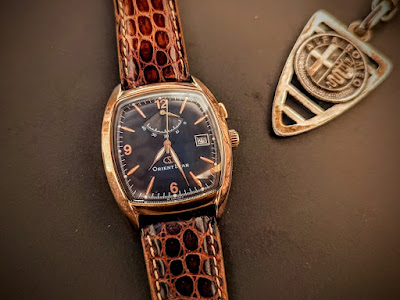 It took me a while to find this watch. Generally, Orient Star "EJ" series models are not too common, and this reference seems particularly rare.

EJ's do however pop up occasionally, so it's worth keeping an eye open. At the time of writing this, I'm seeing on eBay one round cased WZ0091EJ with an asking price of around 300 USD, and one silver-dialed tonneau WZ0051EJ asking for around 700 USD. I'm also seeing on Yahoo Japan a black-dial WZ0061EJ asking around 400 USD. This represents the typical price range for these watches.

As with most pre-owned Orient Stars, if you find one in good condition, you are getting plenty watch for your money! 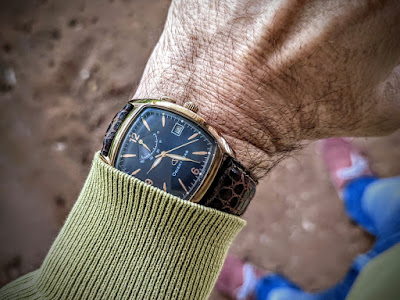