Orient announces today the upcoming release of a new model: a faithful reissue of the 70's Orient SK (which was reviewed here on the blog a few weeks ago) 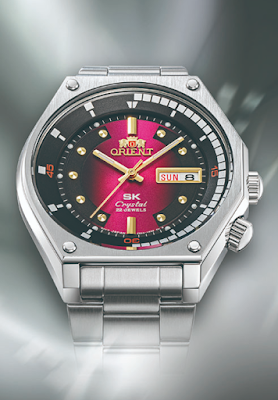 The new Orient SK reissue will be launched in June 2019 (very soon!) and production is planned to continue for less than a year, until March 2020. In other words, this will be a limited production.

Orient will be making three versions of the new SK – one (ref. RN-AA0B02R) in the radiant purple color very much associated with the original SK, another (ref. RN-AA0B01G) in greyish-green (also a well-loved original) and the third (ref. RN-AA0B03L) in dark navy blue. 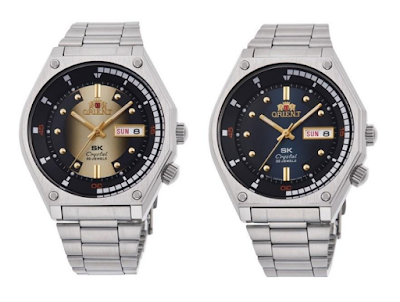 All versions seem to be externally almost identical to the original, while internally the model will use an up-to-date movement, cal. 46 series F6, which hacks and hand-winds.

The case has the original model's asymmetrical shape, rounded on the left and straight lines on the right side, where the two crowns are – one for setting the time and date, the other for turning in the inner bezel. The classic's push button at 2, used for setting the day, is omitted here as it is not supported by the new caliber.

Case measures a healthy 45mm wide and 46mm lug to lug, and prices would be around 270 USD.

The blog's verdict: we like it! It is a fun, pure original Orient stuff, sporty and oozing with character. What do you think of the new SK re-issue?

On today's post I'm going to get a bit more controversial than usual. That's because we're going to touch on the sensitive subject of Homage Watches. Homage, as in "a watch that is not a fake or a replica, but bears a significant resemblance to one particular (and usually very easily recognizable) model designed by some other brand".

Some brands focus almost entirely on homage watches; these are controversial brands by nature, usually getting the cold shoulder from regular watch snobs while appealing to people looking to "get the looks of the original, for less". However when it comes to manufacturers that are known for having sufficient creativity in-house, like Orient, things take on a different perspective.

Today I'll look at three typical examples, one of which is a current model, and the other two are no longer in production. Photos below are all from catalogs and ads; I actually haven't owned any of the homage models – or the originals, for that matter…
Everybody Wants To Be a Little Rolex

…and so, obviously, did Orient, on numerous occasions. Here, for instance, is one of their well-known homage creations: the "President", day-date, in all its two-toned glory. One of Rolex iconic watches, its design had been borrowed by many brands – some fairly respectable (the Bulova "Super Seville" springs to mind). 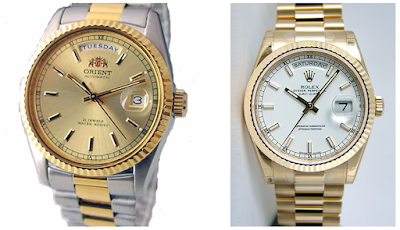 Don't worry about the difference in colors. Both Orients and Rolexes appeared in every possible combination of steel and gold, on case, bracelet and dial.

In the case of the President, the similarity between brands' offerings was great and stood out from a mile away. As nice as the basic design was, there is no doubt people were looking to buy the Orient for its "presidential" looks rather than any particular qualities it may have possessed. Honestly in most ads it was simply advertised as "Orient President" or "Orient Day Date", its true model reference no. quickly forgotten.

Yep. This time, the Explorer II is the star, and this is actually my favorite Rolex watch (which makes the Orient variant very appealing to me as well). 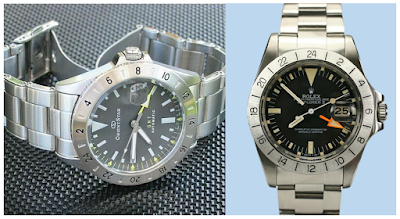 Orient actually made this GMT watch, here shown in ref. WZ0011FE, in a number of colors and dial versions, most of them quite different from the Rolex original. The model pictured too, while mostly resembling the original "Steve McQueen" Explorer II, had some features changed, so that while being a clear homage – it is much less of a copycat design.

Now, How About Some IWC? 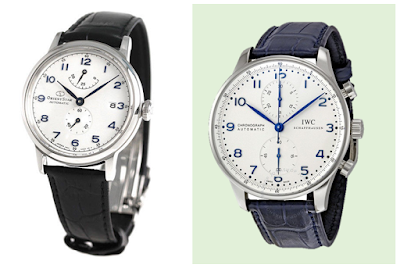 So What's The Verdict

Well, this is not a trial so there's no verdict. Just an opinion. I admit that I'd normally shy away from models that are too boldly a homage to another brand's design, and when a watch company has so many original designs to offer – I'll choose those over homages, any day.

I'll make an exception in the case of the Explorer II/WZ0011FE, because it is a design no longer in use by Rolex (and was not in use at the time of the Orient version production) and to be honest, it is too nice to just leave it to fade away into history.  Some designs simply deserve to remain alive, if not in the hands of their original creator then by someone else.

As for the Heritage Gothic, I'm still deliberating. Is it too similar to the IWC? Has its design been sufficiently differentiated, or given some "Orient Flavor"? Should we even care, as long as it is clearly not faking it and the end result is an attractive, well made watch? What do you think?

The Sea King (SK for short) is one of Orient's most popular vintage dive watches. The SK dynasty has been running since the late 70s and well into the new millennium. While it has changed its shape a number of times, the SK retained a number of key features.

First of all, SKs use the Orient Caliber 469, usually the 21 jewel version. The 469 is super reliable, robust and shock-proof. A proper workhorse for watches built to last decades. While far from offering chronometer specifications, it can nonetheless retain reasonable accuracy for many, many years before requiring service.

Sea Kings typically feature two crowns and a push button. The push button would be for changing the weekday; the main crown at 3 would be adjusting the time and date (the cal. 469 does not hand-wind).

The crown at 4 would be for rotating the inner bezel. On some SK versions this would be a divers' bezel, often in very colorful form. Other SKs feature a GMT bezel. Some of the later models featured a navigation bezel.

All Sea Kings were made in sizable cases, generally measuring between 40-42 mm in diameter excluding the crowns, and with thick lugs, ensuring a good heft and wrist presence. Available in a variety of colors, it is very easy to find one that suits your mood. 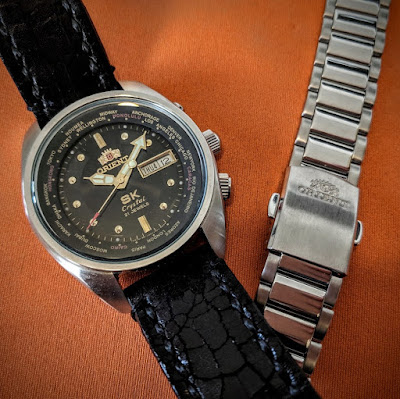 The particular SK at hand appears to date back to the late eighties. While I do like the many colorful versions of the SK, I actually find this specimen to be a very cool piece despite – or possibly, because of – its mostly black dial.

The combination of the solid dial and smooth (i.e. not coined) bezel, makes this a very versatile daily wear. All this, in a generously sized case and packing the robust cal. 469, are making this Sea King much more wearable than most inexpensive vintage watches. 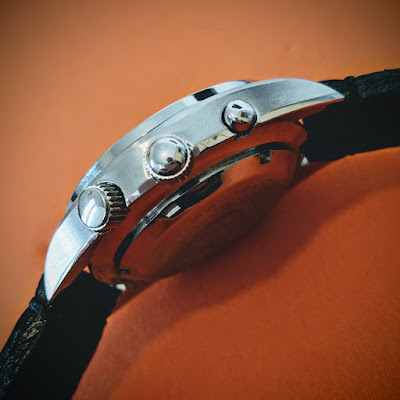 The watch you're seeing here in the photos is actually for sale, so if interested – get in touch, preferably via a message on the blog's facebook page. Asking price is a modest 180 USD, including standard international shipping and eBay fee. It also includes both the original bracelet and the great Martu Leather "Drakko" strap shown in the photos – which is thick, soft, uniquely textured, and fits the watch dial perfectly. 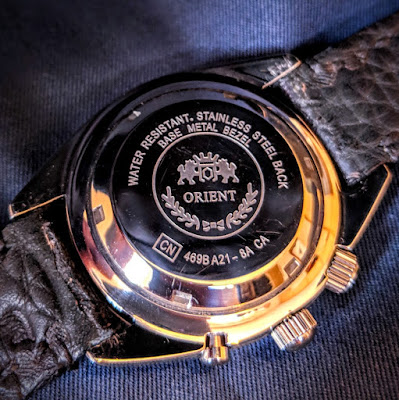 As you would expect from a well-kept Sea King, this specimen looks good, works well and does not look outdated at all. It appears that it was not worn many times, and probably spent most of its life at rest. Case size is 41mm width without the crown, 49mm lug to lug, and 20mm lug width. 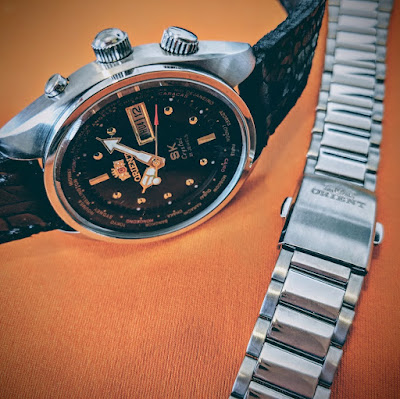 So, there you have it – another fine Orient classic, this time with an opportunity to own it!