We have been waiting to see what surprises Orient has in store for its fans to celebrate 2020 as the brand's 70th anniversary. And today the first wave of anniversary releases begins rolling out, in the shape of two very interesting re-issues: The King Diver and Retro-Future.

First up is the "Weekly Auto Orient King Diver", originally launched in 1965 and a true iconic model of the brand, with the new version due for release on March 19. 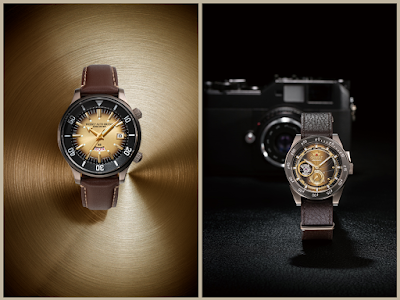 The new models appear to be a very faithful reproduction – including the unique hands, the round weekday window, the inner rotating bezel… absolutely authentic! Only slightly larger, at 43.8mm wide vs. the original's 42. Lug-to-lug length is 50mm, and the watch is 14mm thick, including the mineral glass (which seems to be somewhat domed). Lug width is 20mm. Driving the watch is caliber F6922, hacking and hand-winding like all F6 movements.

The result is simply beautiful, and assuming the quality is there – we're in for a treat. At little over 400 USD for a cool looking "super-compressor" style diver (rated to 200m) this one should be a sure success.

The second announcement is based on a more recent model, the Orient Star "Retro-Future" family and specifically the "Camera" from 2005. Curiously though, the new release is labeled Orient, not Star.

The retro-future design is quite unconventional, and – love it or hate it – is Orient DNA through and through. Price for the retro-future camera would be around 530 USD. 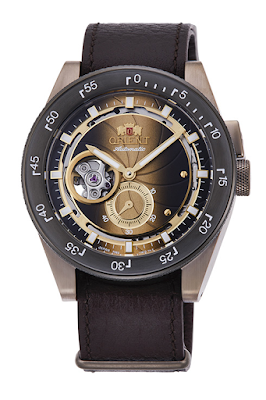 So – there you have it – 2020 is on! We're looking forward to seeing these new models in the flesh… and particularly, to hold one of these new King Divers next to the original !... 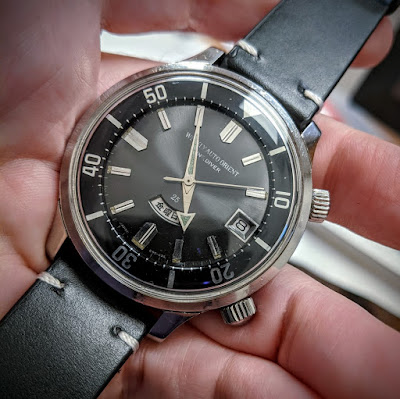 Many watch brands attempt to be associated with the fast-paced world of motorsports. This association makes perfect sense, as many enthusiasts are fans of both cars and watches; I personally often experience going to a car meet and come across a familiar face from watch collector groups, or vice versa.

Over the years, Orient too has dipped its toes in this world, particularly (but not exclusively) in cooperation with Subaru, releasing many motorsport-themed models. There is no way to cover all of these watches in one story, but today we'll be looking at quite a few of them and get a taste of the action. 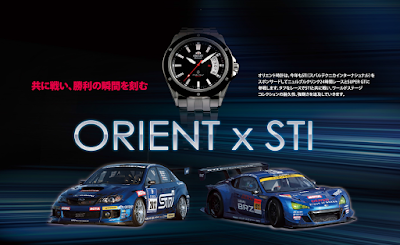 It seems that Orient's initial interest in motorsports was not focused on Subaru cars. In the 2000's there were a few Orient models inspired by cars and drivers that had little to do with the Japanese car manufacturer.

There were, for instance, the Clubman models; we've already given these unique models plenty of coverage on the blog. 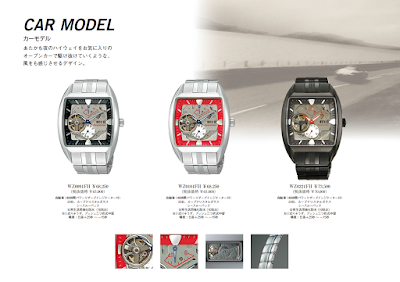 Later that decade, Orient began toying around with the concept of retro-future watch designs. These watches were produced in series inspired by different types of items – and those included cars and motorcycles (alongside cameras, and later - guitars and record players). 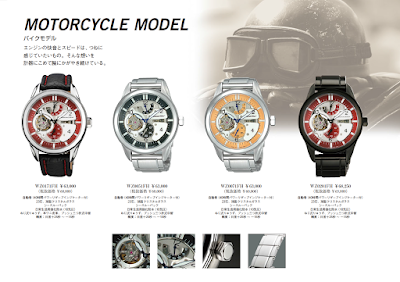 And there was also the Gronholm limited edition. Marcus Gronholm was a famed World Rally Championship driver (and quite a character). Orient released a special piece, ref. WV0111DB, to commemorate Marcus and BP Ford World Rally Team winning the 2007 WRC Manufacturers Championship. The dial was of course blue, like the BP Ford Team color, and the overall design was meant to reflect the design of the car. Not surprisingly, it was limited to 2007 units… The watch itself was released in 2008. 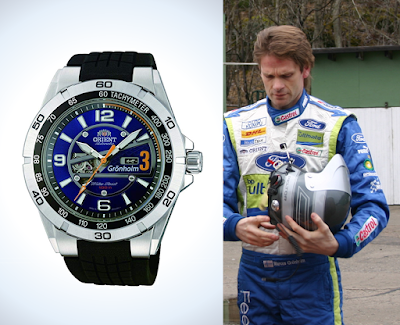 After Gronholm's retirement from WRC Orient switched its interest from Ford to the Japanese domestic car manufacturer, Subaru (which, a little like Orient, produces in much smaller quantities than most local brands – but has very loyal supporters).

In 2009, Orient announced it has become a supporter and sponsor of Subaru STI (Subaru Technica International), a team that was participating in the "Nurburgring 24 Hours Race". Subaru finished 5th in class that year. Later in 2009, Orient released for the first time a watch, one of the models in its sporty "World Stage" collection, in association with Subaru STI – although, this was purely a marketing thing and the watch did not actually carry any visible reference to Subaru. 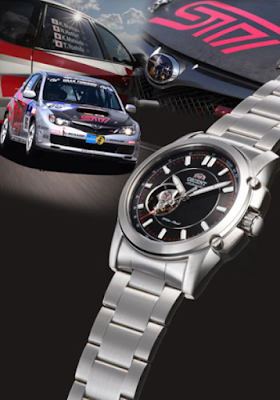 Between 2010 – 2012, Orient continued to expand its World Stage line-up with more models, this time including some references that were properly Subaru-branded, for instance the elegant and cleanly designed WV0521ER, or sporty quartz chronographs, such as WV0201TT.

Orient also continued to use its ties to Subaru to promote its sporty models, even ones that did not bear the Subaru or STI logos, such as can be seen below in the front page of a 2012 catalog adorned with the then-new Subaru BRZ (in its hard-core GT300 guise). 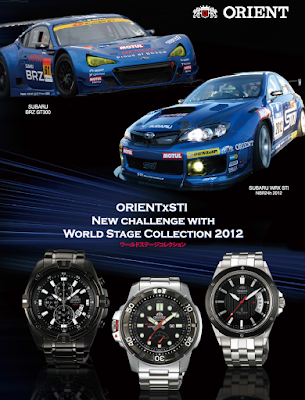 In 2013, Orient launched a new motorsport-inspired collection: "Speedtech". The initial line-up included a couple of automatic semi-skeleton options (ref. WV0011DA / WV0021DA); a couple of standard quartz chronographs (WV0011TZ and WV0021TZ); and most interestingly, the ERS model.

ERS or Energy Recovery System, is a term used in the automotive industry to describe a system which stores a vehicle's kinetic energy as it is braking, and makes the energy available to boost acceleration later on – a technology which obviously has many uses in motorsports, and is indeed employed by F1 cars and some other types of race-cars. Orient, rather cleverly, had adopted the term ERS to name the kinetic member of the Speedtech collection, ref. WV0011KT / WV0021KT. 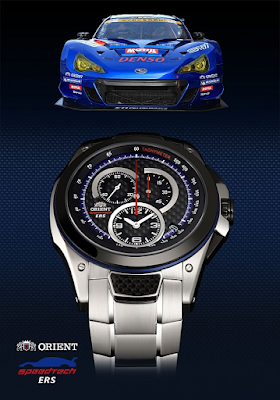 Orient did not often employ kinetic mechanisms (i.e. quartz movements where power is generated by an oscillating rotor like in an automatic movement). In the case of the ERS, the movement was borrowed from Seiko, and the result is indeed very similar to the rather cool Seiko Arctura Chronograph. Orient again highlighted the link between this model and the Subaru GT300 – and it really did not matter so much that Subaru never actually used ERS in that model (nor did any Subaru model, AFAIK)…

It was not all sports and burning rubber though, and in 2013 Orient also released a couple of watches as far removed from the Speedtech models as can be: the super-elegant, manual winding Orient Star references WZ0031DD and WZ0041DD, commemorating Subaru's 55th anniversary. 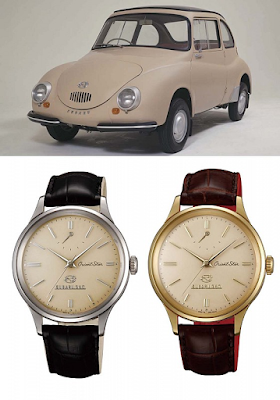 Orient continued to release more Speedtech and Subaru STI-themed watches from time to time, and we cannot cover all of those in one blog post. So we'll conclude by focusing on one particular esteemed Orient moniker that received the "STI treatment": the M-Force.

In 2013, having claimed class win at the Nurburgring 24 hour race in 2011-2012, Orient released a special edition of its lefty M-Force, with an STI-branded dial aptly clad in Carbon, as ref. WV0131EL.

Orient continued in this path, releasing the M-Force ref. WV0171EL with an STI team-blue dial in 2014, and again with a carbon dial ref. WV0211EL in 2015. Curiously enough, in 2016 it did not release an Orient branded STI model; instead it built an M-Force variant that was branded as Subaru – not mentioning Orient on the outside at all – and which was actually being sold as Subaru merchandize.

Then, the Orient-Subaru relationship faded away and all Subaru-branded Orients went out of production. Currently Orient does not sponsor motorsport activities, and it seems the brand feels more at home associating with diving, outdoors and other personal sports activities. Still – this important chapter in its history, with a rich legacy full of cool and interesting models, is not forgotten! 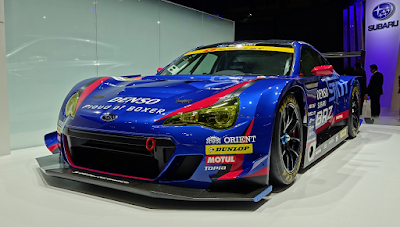 A new year, in fact a new decade has just begun. Outside it's raining cats and dogs (maybe even cows, by the looks of it). This gets me in the mood for reminiscing, how it all started… my interest in Orient watches, that is. 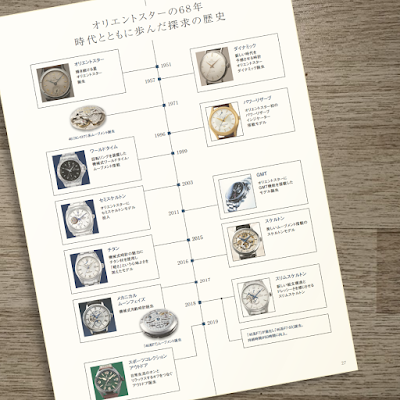 Collecting watches is usually a hobby one picks up as a grown up, when fascination with mechanics (or history, or design, whatever it is that drives one into watches) is met with sufficient income. For me this hobby did not start with Orients… I must have had at least a dozen other watches before getting my first Orient, a vintage Chrono-ace. 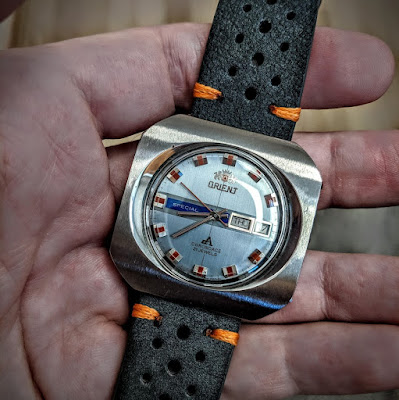 It was actually much later that my renewed interest in the brand brought up distant childhood memories of my first real watch, even before the ubiquitous Casio calculator… yep, that was an Orient, given to me by my dad when I was around 10 years old or a little later – and if memory serves me right, it was his watch that he gave me once my wrist was large enough to accept.

Large wrist or not, it was a massive piece for a kid. I remember the heft of its steel case very well. While watches were quite small back then, compared to today's case sizes, to me it seemed big enough.

One other thing I remember well, is the lume. The thing had some serious lume on it. I'd stay up well after lights-out just to watch that Orient shine in the dark in blue and green (markers and hands were different shades). That image, in fact, must have burned deep into my mind, as it kept coming in dreams years after. Yes, it's true: I'd dream of watches. Weird, wonderful complicated ones with plenty of buttons and functions.

So it came to be that memories of my old Orient crossed paths with this new hobby. I like many other watch brands of course, but keep a special place for Orient.

And now, that it's not just a new year that is starting, but it's actually Orient's 70th anniversary, I wonder: what new models will 2020 bring? I guess we'll have to wait and see! Stick around and keep following the blog, it will surely be interesting!