Like many watchmaking brands, Orient too have the occasional fling with car and racing inspired themes. Someday we'll do a proper write-up about Orient's motorsports-related watches. Today, we'll just look at one particular example, where racing was little more than an abstract influence.

Orient's Clubman models were a bunch of sports watches, produced by Orient in small numbers in the mid- and late- 2000s. There were basically two batches of Clubman models: the "Model 1" and the "Flagship Model", both under the "Orient Star" badge. 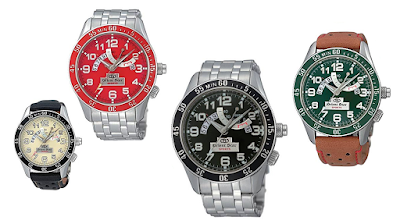 Model 1 was a pretty typical Orient watch, released in 2005. Utilizing caliber 46G, the movement driving the then-current generation of M-Force watches, and encased in a tough-looking 41mm stainless steel case. What appears like the winding crown at 3 o'clock is actually the date quick-set pusher; the real crown is at 4.

The sporty look of these Clubman watches stood out among most Orients, where non-diver models did not have timed bezels like here. The water resistance of these models was a fairly standard 100m.

While not specified in Orient's press releases of the time, it was later mentioned that the motorsport theme here was embodied in the colors of the different versions, which could be attributed to different famous national racing color schemes:

The black dial, black bezel version, ref. WZ0301EX, uses a color never associated with a particular nationality, but it does emphasize the metal, or silver color, associated with German racing. The red dial, red bezel version, ref. WZ0311EX, represented Italy. The white dial, black bezel ref. WZ0321EX would have represented Japan itself, and WZ0331EX with its green dial and bezel were of course, the racing colors of Britain.

These models sold for under 600 USD, and are fairly hard to find nowadays. 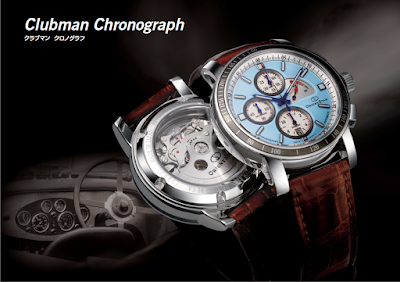 The Clubman chronograph models, which Orient referred to as the "Flagship Model" of its Clubman watches, were released a couple of years later, in 2007. We did cover those here on the blog, in our article referring to Orient's automatic chronographs.

Indeed these were much more expensive than Model 1 Clubman models, five times as much in fact, at around 3000 USD. They did not share much really with the first Clubman release, except for the  very general motorsports influences (even the bezel here isn't a real divers' bezel and does not rotate).

This time Orient's press release was clearer in explaining their inspiration: the dial layout, they said, was made to remind the wearer of the view from the driver's seat, looking over the dashboard with the power-reserve supposedly referring to the fuel gauge; the curved sapphire glass would be reminiscent of the windshield. They even referred to the light blue color of ref. WZ0031DS, as being "classical" blue – perhaps associated with French racing, overlooked in the previous "Model 1".

And after that, there were no more Clubman models. However these rare models produced over a decade ago, occasionally pop up for sale, and as well made and quite attractive as they were they make for an interesting proposition.