Today we will take a quick look at the early anti-magnetic watches that were introduced by Orient in the late 1950s. But first, a little theoretical background.

Historically, there is a problem with watch mechanisms and magnets. When their ferrous components get magnetized, they no longer move about freely as intended, instead sticking to each other or themselves. In particular, this affects the balance spring, making it oscillate more quickly – which results in the watch running too fast.

There are generally two approaches to solving this problem – you may either use non-ferrous components, or shield the movement from magnetic fields.

Today, the preferred approach in most cases is the first. Materials like Nivorox (Nickel-Iron alloy) and similar were first put to use, improving magnetic resistance sufficiently so that most watches in recent decades could satisfy the anti-magnetic standard for watches, "ISO 764", namely to resist up to 4,800 A/m (60 Gauss). Lately, more manufacturers turned to using Silicon balance springs, achieving even better results.

Mind you, 60 Gauss might not seem like much when you think of watches such as Rolex Milgauss taking on 1,000 Gauss, but in fact a thousand Gauss is very much, way more than most of us would ever encounter in our daily lives, and 60 is just fine.

The other option, to shield the movement, is basically about placing it inside a "Faraday cage" – an inner casing made usually of soft iron, which is easily magnetized (and de-magnetized). It essentially attracts the magnetic field and prevents it from affecting the movement inside. This method is less common today as it makes for a heavier, more complex construction; and, it loses its effectiveness with any hole put through the cage, preventing such features as a date window and other "complications". However, before non-ferrous balance springs were available, this was the best way to achieve high magnetic resistance. 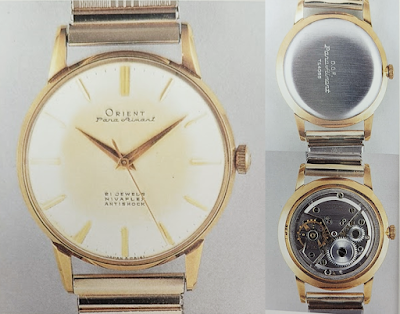 In 1958 Orient decided to launch an anti-magnetic watch of its own, which would be the first among the Japanese watchmakers. Naturally, the brand did not have the resources to delve into new material research, and chose the "cage" approach.

By then, Orient had already introduced the modern N-Type movement. However, it chose to build its antimagnetic model around the older T-Type caliber, which was considerably smaller (23.30 vs. 25.50mm). This way they could keep the size of the watch down, despite the added width of the cage.

In the following picture, you can see the main cage, next to the caseback. Not visible in the photo is the metal disc which lies beneath the dial, which closes the lid over the movement, with only two little holes left for connecting the crown and the hands. 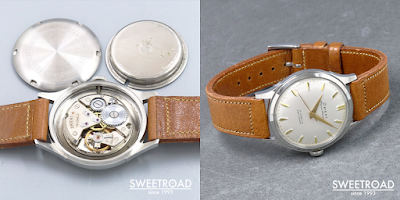 Curiously, Orient chose to call this new model "Para Aimant". Now, Paramagnetic is the proper term for the soft iron cage – which by the way isn't really soft, it's just the term used to differentiate it from hard iron, which is harder to de-magnetize. And "aimant" is French for magnet. But, paramagnetic in French would be "paramagnétique"…

Anyway, the cage did its job well enough. The watch was said to withstand 200 Gauss, more than three times the requirement of ISO 764.

A number of Para Aimant versions were made, with movement variations numbering 17, 19, and 21 jewels. These were probably priced in the range of 5,500 – 6,500 JPY, making them more expensive than most T-Type models, and very close to the high-end Royal Orients.

Besides its quirky semi-French nomenclature, there was another problem with the Para Aimant: Citizen watch company was using the "para" prefix for its own products. In 1956 Citizen released the "para shock", its first shock-resistant watch; and 1959 saw the introduction of the "para water", Citizen's first water-resistant model.

Apparently, Orient wanted to avoid the commercial conflict, and seeing that their antimagnetic watch was already in the Royal Orient price bracket, the brand took a logical step: the Para Aimant was set aside, and in its place came the Royal Super Antimagnetic. 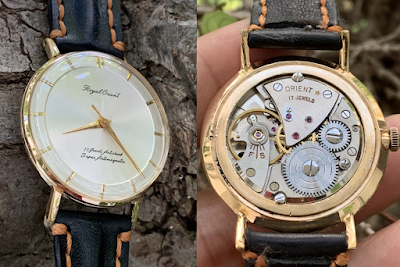 This time around, Orient used the N-Type movement, specifically its 17 jewel variant (likely in order to keep the price down). Photos of the Royal Super Antimagnetic do not reveal a separate cage like the Para Aimant, and Orient did maintain the same diameter with the Royal Antimagnetic as other Royal models – possibly, the case was built with the iron cage already part of it, making the whole construction more compact. 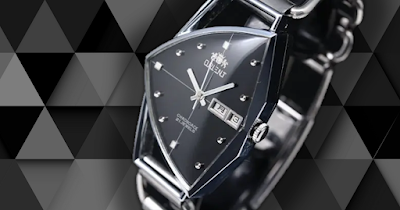 In 1957, Hamilton introduced a revolutionary watch named Ventura. The Ventura was the world's first electric watch – not quartz, mind you, as that took another 12 years to make – and as such, was given a most futuristic case. Designed by General Motor's famed Richard Arbib, it was the Ventura that introduced triangular watches.

The Ventura's design overtook its novel mechanism in becoming the model's signature characteristic, to the point that nobody cares if modern Ventura reissues are mostly automatic; and it made the triangular case desirable, so that even Patek Philippe rushed to do one of their own, and in 1958 presented the reference 3412, designed by another big name: Gilbert Albert. 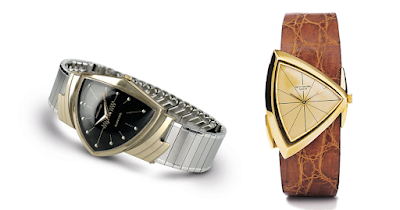 It was not surprising then that Orient, in one of its periodic attempts to enter European markets by borrowing from a European design, soon followed with its own little triangle.

The brand's first go at the triangle concept was released in 1958 under the Orient Star Dynamic name. Produced alongside other Dynamic models with more traditionally shaped cases, this was a very accurate duplication of the first Ventura.

As Hamilton's watch was made in gold, the Orient was 14K gold filled. It was a fairly small watch, 29mm wide, and around 34mm lug to lug. Like other OS Dynamic versions, the triangular piece contained the Type T movement. 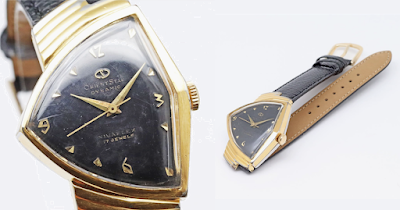 Two versions were made – one that had a black dial, and another with a special two-tone, white and golden dial.

Interestingly, Orient also produced a pocket watch version. That version had a symmetric design, as opposed to the wristwatch's asymmetric case. 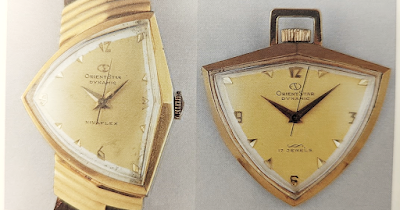 A few years had passed, and in 1963, Orient returned to the triangle. This time the source of inspiration was Hamilton's Pacer – a model that followed the Ventura, with not as ornate a case – and the platform was Orient's Olympia Calendar, and its 19-jewel Type LC movement.

The Olympia version was larger than its Dynamic predecessor, at 31mm across and 42mm long. Again, it was produced as a gold-filled case, on a steel base. 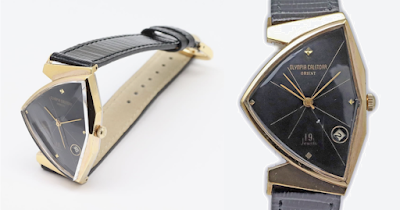 The Orient Weekly Auto AAA was a fairly common model in the mid-1960s. The non-auto Orient Weekly AAA, however, was much rarer – basically having the Auto's movement with its rotor removed, renamed caliber "Type MCY" (there was also a date-only version, Type MC).

In 1965, Orient used the Weekly AAA as the basis for its next triangular design. This time they manufactured a watch with distinctive lugs, different from Hamilton's, and also larger – being 33mm wide, and 52mm long from lug to lug. No gold plating was applied. 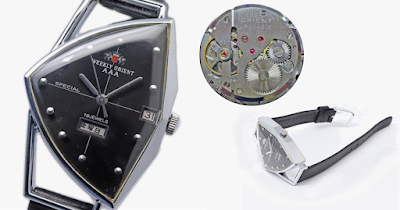 In 1970, Orient took caliber 42 and placed it inside the Weekly AAA's triangular case. The Chronoace's familiar date quickset button was omitted, as there was no place for it in the case. 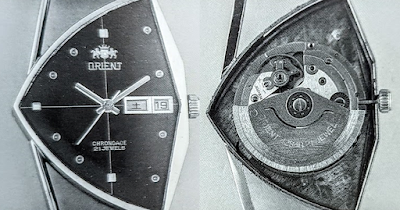 This was the last of Orient's vintage triangular models. Note how each link in the chain added something new to its predecessor: the Olympia added a date; the AAA added the weekday; and the Chronoace added automatic winding. 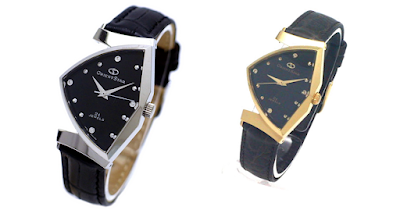 The new model was branded as Orient Star. Two variants were produced: reference NWAA-A0 (or WZ0051NW in Japan) with a gold-plated case, and ref. NWAA-C1 (or WZ0061NW) in steel. The movement inside was cal. 55141, a small mechanism used primarily for women's watches.