The Orient Kanno was launched in 2018. Originally spelled "Kano" the company quickly switched to the newer spelling to make sure it was not pronounced "Kay-No" by mistake. Not that it matters much, as official Orient catalogs do not really mention this name anyway, rather referring to the model as one of its "Diver-Style Sport Watches".

Anyway, almost four years down the road, and having reviewed most of Orient's other recent dive (or diver style) watches, it was about time the blog posted a review of the Kanno as well. Luckily we came across Mr. Shahar H., who generously allowed us some time with his Kanno reference RA-AA0915R. 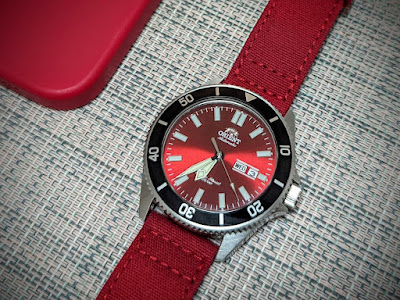 Some technical details to start with: the Kanno is 43.6mm wide without the crown, and 50mm lug to lug – considerably larger than the Kamasu, for example, with its 41.8mm width and 46.8 length. Thickness is similar though at 12.9mm, and lug width is the same 22mm.

The movement inside is Orient's common F6922 automatic, equipped with day and date discs, and providing 40 hours of power reserve and +25/-15 seconds per day accuracy. 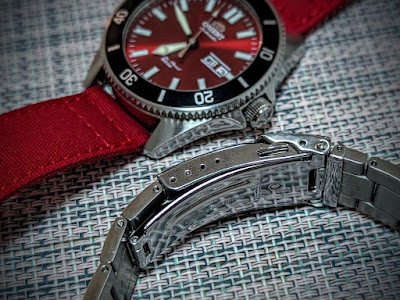 On the wrist, the watch feels comfortable, not too large, and certainly not too heavy. I wore the Kanno while it was attached to a Barton canvas strap, not the original bracelet. However, the bracelet is relatively light – some would argue it lacks heft – and despite the significant difference in dimensions, the Kanno is only 5g heavier than the Kamasu.

The Kanno owes much of its wearability to the sloping lugs, which lower ends is almost on the same surface as the flat bottom of the case. 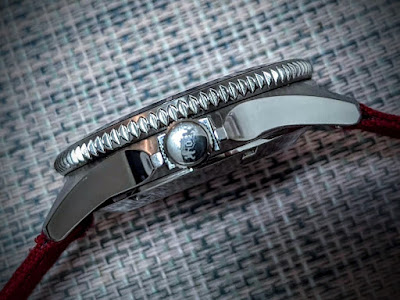 I was particularly curious to see how this model compares to the Kamasu (and other inexpensive Orients). The Kanno officially costs about 30 USD less than Kamasu, a difference which would presumably be attributed to having mineral glass as crystal, instead of the little brother's sapphire.

Honestly though, I have to say I also noticed a lower level of finishing of the Kanno's bezel. Its design is simpler than the Kamasu's, having a very squarely shaped profile and plain round insert. Even the font of the printed numerals here seems less elegant, being thicker and taller. Bezel action seemed less refined than in the Kamasu, with more resistance to movement in the right direction – yet, having more backplay. 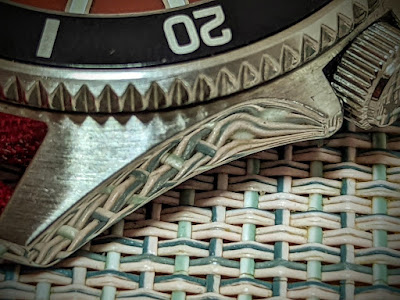 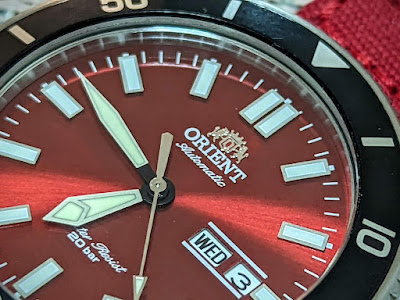 Also less impressive was the day-date aperture. The dial cut-out on the Kamasu is sharp and nicely framed, while the Kanno's cut-out seems more rough and only has a couple of lines painted above and below it, instead of a proper frame. Likewise, the hour markers on the Kanno are all simple rectangles; the Kamasu marker set consists of rectangles, trapezoids, and a triangle.

The case construction seems to be very similar in shape, finishing and quality to the Kamasu and other Orients at this price bracket. While having a somewhat duller appearance, the crown actually felt better than the Kamasu's, with no apparent wobble and smooth winding action. 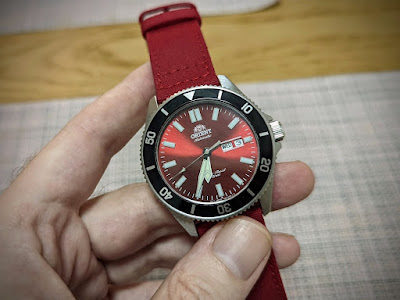 All things considered, the Kanno is a decent offering, but in my opinion lacks the extra flair that makes the Kamasu such an exceptional value for money. While some of the differences in quality could be attributed to random fluctuations within a loose manufacturing tolerance, some are obviously intentional.

I should point out that the owner of the watch said he liked it a lot, and also found it to be very accurate. An owner's opinion is definitely important! To me, it just seems Orient can do better even at this low price point – I know they can.

We're following up now with Orient Europe's announcement of the global-distribution versions of these models – and these include not just new reference numbers of the same versions, but new versions as well (differing in styling, technically identical). 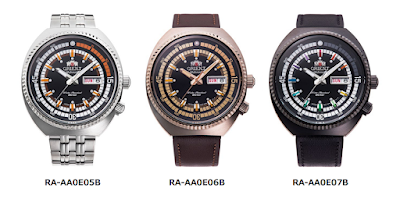 For the Neo Classic Sport, we now have the following references:

·         RA-AA0E05B features a raw stainless steel case, with white and orange markers, and a steel bracelet. 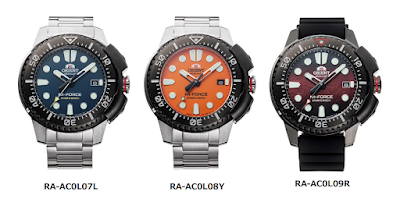 For the M-Force, we now have the following references, each intended to represent some element of the Earth:

Orient has just announced a new model that's about to join its sports collection later this month: the "Neo-Classic Sport". The model clearly takes inspiration from numerous vintage Orient divers of the 1960s and 70s, with a case resembling the old (and identical to the re-issue of) World Diver, and a lively dial combining elements of various King Diver variations. 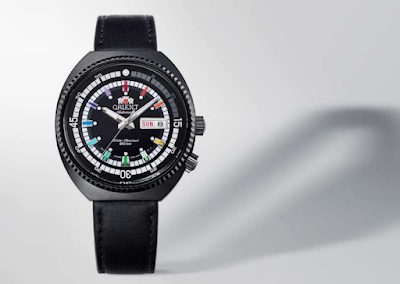 The new Neo Classic is technically very similar to the World Map model. It features the same large, pebble-like, lugless case, measuring 43.5mm in width and 46mm in length, and 13.9mm thick. Inside is Orient's automatic caliber F6922 with 40 hours of power reserve. The crystal is mineral glass, and the watch is rated to 20 bar (200 meters).

As with the World Map, it's a dual crown design: the crown at three is for winding, setting the time, and adjusting the day and date, while the one at four turns the internal bezel. Unlike the World Map, the Neo Classic is bundled with a 20mm leather strap, rather than steel.

Of course, the highlight of the model, and what differentiates it from the World Map, is the dial design. The dial is dominated by markers. Big bold 1960s style fixed hour markers, are surrounded by very prominent minutes markers on the rotating bezel, and further accompanied by lume dots. 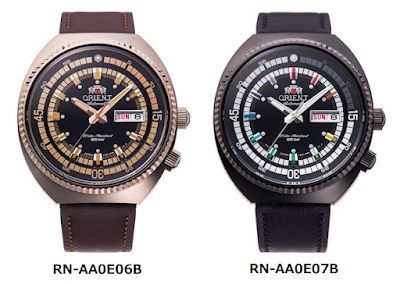 The result is a very unique look, which one may love or hate – but if you do like it, then honestly no other brand pulls it off better than Orient. Two references are currently being presented, each with a different style:

Ref. RN-AA0E06B is non-limited, and features a bronze-colored case and brown strap. Here the black dial is mostly dominated by orange and gold hues of the different markers. 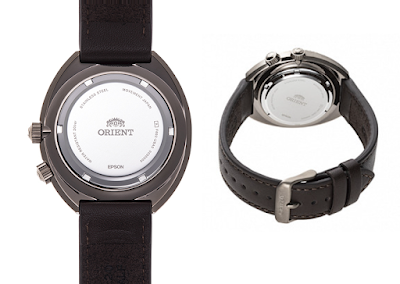 Both models are priced at around 350 USD, which seems fair enough – and judging by similar recent releases from Orient, we expect these to be good quality products and great value for money.

The current generation of M-Force watches is already familiarized itself well with Orient fans. This model was launched two years ago and reviewed here on the blog in early 2021, and has since proven itself worthy of the M-Force name.

Now, remember that the "M" in this watch's name historically stands for "Mechanical, Massive, and Maverick"…? Well, with its latest iteration Orient claim to add "Magnificent" as well! Yes that's largely marketing fluff, but looking at the new reference RN-AC0L09R I tend to agree. 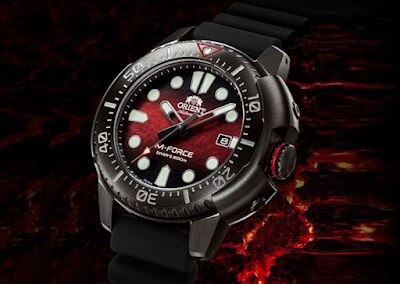 The star of the show is the dial – and while the few images released aren't awfully detailed, they reveal a striking display of deep dark gradient red, combined with a kind of Grand Seiko-esque swirling texture. According to Orient, it is inspired by red hot magma.

Other than the dial, the watch generally carries the same features, movement and dimensions as sibling M-Forces: case width is 47.3mm including the crown guard construction, length is 52mm lug-to-lug, and thickness is 13.2mm. In this reference you get a black plated bezel and rubber band. 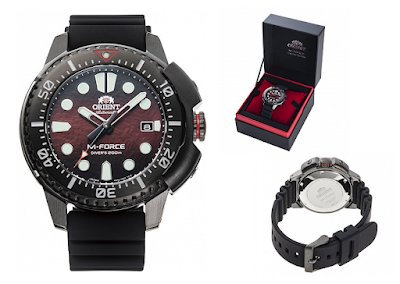 Inside is Orient's automatic caliber F6727 with 40 hours of power reserve, and the usual +25/-15 seconds per day stated accuracy – which in most cases turns out to be much better in reality.

The "Magma" M-Force is limited to 2,000 units, is priced the same as other M-Force versions, and should be available to purchase in September 2022.