Orient introduces today a bunch of new watches, providing an interesting take on existing designs: an "outdoor", or field / military style version of the M-Force; and Moonphase watches with a Mother-of-Pearl dial. 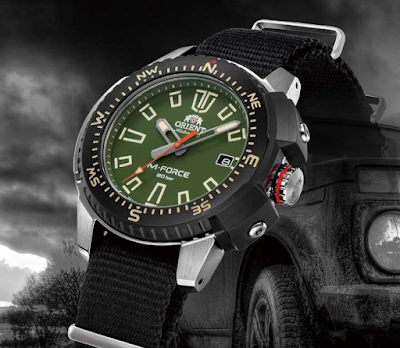 This one is based on the latest iteration of the M-Force dive watch. Two primary differences have been made to set this version apart from its marine counterpart: the divers' bezel has been replaced with a navigation bezel, and the dial markers have been made thinner (perhaps as to make for a bit stealthier appearance at night, when one goes about their covert military mission).

Other than that, the overall construction, general specs and dimensions are unchanged, including the 200m depth rating and the extra anti-shock protection which is an M-Force hallmark. This is still 45mm wide (47 counting the beefy crown guard) and 52mm lug to lug, which, as we discovered on our hands-on review, are in fact perfectly wearable and – for wrists not too scrawny – even comfortable. 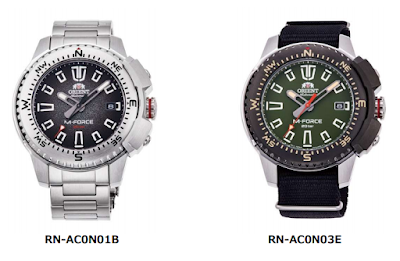 Two models are being introduced at this time:

·         Reference RN-AC0N03E features black coating on the bezel and crown-guard and a green, military-looking textured dial. This one comes on a nylon NATO-style strap.

Prices are the same as the dive-oriented versions. Availability is scheduled for June 3.

The blog's verdict: This is a welcome addition to the M-Force collection. We already learned to love the base models and are always happy for a greater diversity of options to choose from. 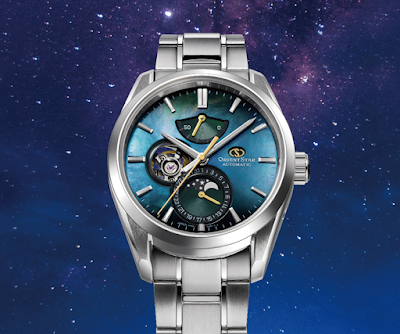 This release extends the range of Contemporary Moon Phase models introduced last year. Interestingly it is this more modern and technical-looking collection, rather than the classic moon phase collection, that Orient chose to put the MOP dials on. This, despite Mother-of-Pearl dials being generally considered romantic and a little bit old-school.

Here too, the base model's overall specs have been preserved. The watch measures 41mm across, 48.5mm lug to lug, and the main design elements, case structure and dial layout – including that lovely moon-phase display – are unchanged. 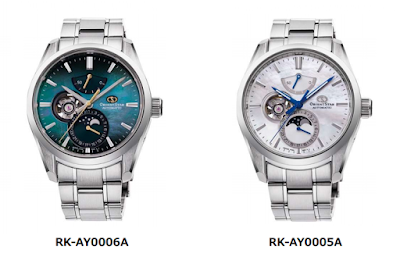 Two models are being introduced at this time:

·         Reference RK-AY0006A has an interesting looking dial which, in the style of MOP, appears to be a mix of greenish and bluish hues, and will likely have a cool effect in changing lighting conditions. It will be a limited edition of 700 pieces, considered to be part of Orient Star's 70th anniversary releases, of which 500 are reserved for distribution in Japan.

Prices are about 100 USD higher than the standard versions, which appears to be a reasonable premium. Availability is scheduled for June 3.

The blog's verdict: The contemporary moon-phase watch is already an impressive piece, offering a high level of watchmaking. If you like the basic design and the moon phase complication, and are fond of MOP dials, the new releases should get you excited.

Today we are celebrating the blog's third anniversary. And while most articles telling the story of the past would probably go on about the pandemic and such, I prefer to just stick with happier thoughts – and hoping that next year this won't even be a consideration… 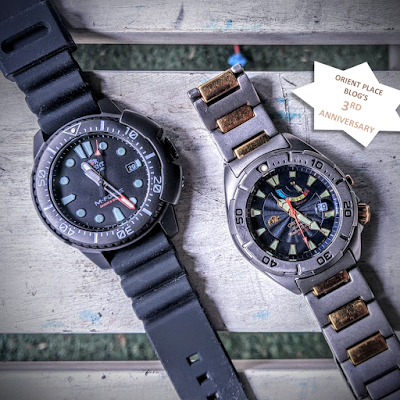 Some numbers – and here are the most exciting ones: the blog continues to grow in popularity with more than 100,000 views since the previous anniversary, a rise of 25% in traffic compared to the year before. So once again – thank you, readers, followers, likers, sharers, and commenters!

Thirty-six stories were posted in the last year, an average of three per month. These included five hands-on reviews of current models, five reviews of vintage or discontinued models, and eight articles covering new model releases, the rest being a medley of topics ranging from Orient's history to various philosophical discussions.

The most popular story of the last 12 months was actually an older post – the one discussing Royal Orient's demise. It got 2,310 reads this year and is perhaps an indication of the huge attention this now-dormant sub-brand of Orient continues to draw. Please bring it back, Orient, the world is ready!... 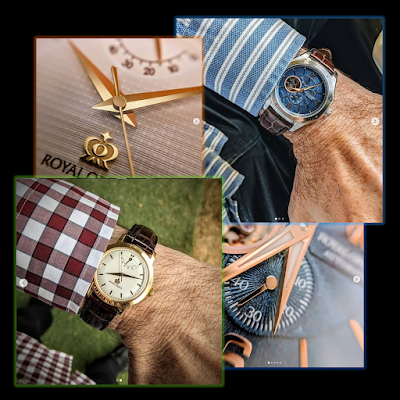 Now, what about social media?

The blog's Facebook page roughly doubled its audience, rising from around 260 followers one year ago, to more than 540 at the moment. Many of them engage with content on the page, like and share posts, which is great! And by the way, all posts on the page are public, so you are most welcome to share more – this helps the blog reach new readers.

The most liked Orient watches featured on my Instagram account were the Royal Orient ref. WE0011EG, the Orient Star WZ0211FD, and the new M-Force. Yes, the Royal one tops this popularity contest as well. 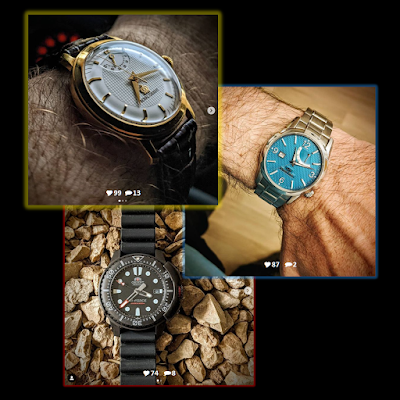 What else happened this year that was interesting?

The new M-Force was definitely such a thing. When the first images of the new model emerged, it seemed that the watch was not a true successor of the M-Force lineage. However, having bought and reviewed this watch, my opinion changed – and it seems so has the impression of others who purchased it. I definitely learned to like it and appreciate its robust appearance and surprisingly comfortable wearing experience.

Also interesting was the introduction of a solid-dial Moonphase watch – albeit a limited production run. It seems to have answered the wishes of many of complained that the open-heart aperture ruins the otherwise classic look of the original models. Will this be the start of a welcome trend where Orient would offer both open-heart and closed-dial versions of its watches? We will have to wait and see.

For me, one of the most pleasant surprises and perhaps the coolest of Orient's recent releases, was the re-issue of Orient's World Map Diver – including both a faithful reproduction of the 1969 original, and some new colorful variants.

What next on the blog? Probably more news, reviews, stories and discussions. Is there anything else you would like to see on the blog? Any particular models or topics you think the blog should cover, or perhaps – any content of your own you wish to share with us? Your feedback would be highly appreciated, so keep commenting, here or on our Facebook page, and keep following Orient Place blog!

Long-time followers of Orient have probably come across the "World Stage Collection" name, mentioned alongside some of the brand's watches. We'll look into this collection today to understand it better. 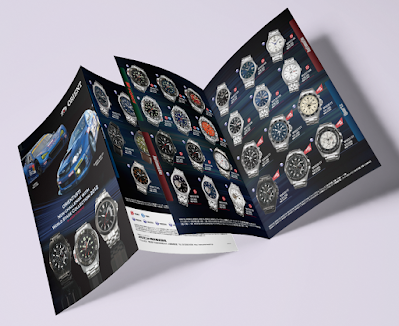 The World Stage Collection was, in fact, anything but a cohesive lineup of models. Rather, it was a term attached to several vastly different releases over the years, roughly between 2007-2016.

The first watches advertised as part of the World Stage Collection were described as sporty and tough, as one would expect from a brand supporting the Subaru STI racing team. At the time, Orient's marketing referred to these models as being highly acclaimed overseas, and becoming especially popular in Europe. 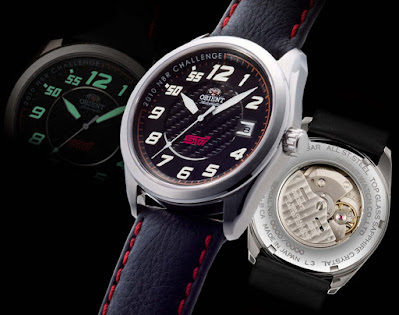 There were exceptions to the "rule of sportiness", however, with Orient presenting a number of World Stage models that were more sporty-elegant in nature. Such was this reference WV0531ER, for example.

In 2011 the World Stage Collection began to expand and become more diverse, with the introduction of quartz chronographs into the range. The first model to launch this expansion was the "STI collaboration model" – a quartz-powered model, but still very much in line with the styling of previous sporty World Stage models, and of course – equally racing-inspired. 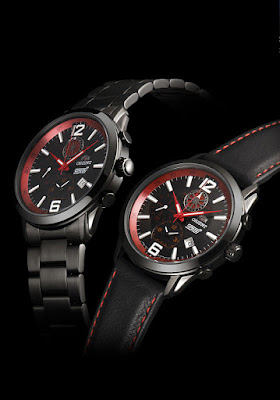 A few more such STI-related models were released, and then in 2012 Orient added new quartz chronographs to the World Stage Collection that were no longer linked with motorsports. 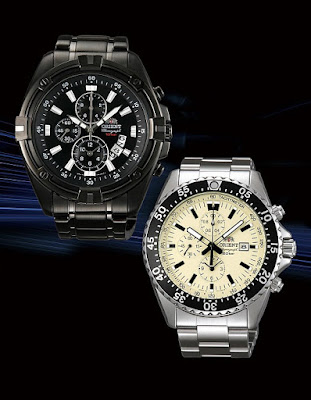 By this time, the brand's marketing verbiage had changed to describe the collection as related to Orient's global expansion. The World Stage Collection was said to include two lines, one being mechanical and the other being quartz. The models were described as boasting a sophisticated design, combining technology and tradition, and again – becoming popular overseas.

Orient did not neglect its mechanical movements though. In 2011 for example, a respectable addition was made to the World Stage Collection with the addition of the "Caliber 469 40th Anniversary" model, celebrating Orient's long line of trusty 46-series movements. 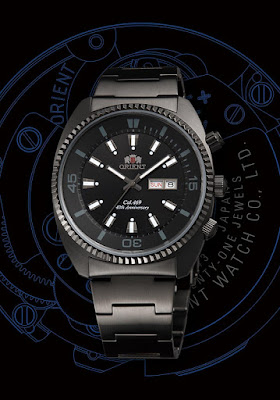 Two versions of the Cal. 469 anniversary model were made: reference WV2371EM (pictured above) in black PVD, and ref. WV2381EM in raw steel.

Toward the end of the collection's life, it further expanded and seemed to cover most of Orient's watch segments. While some sporty models remained part of the collection, most new releases seemed a lot more dressy and elegant. 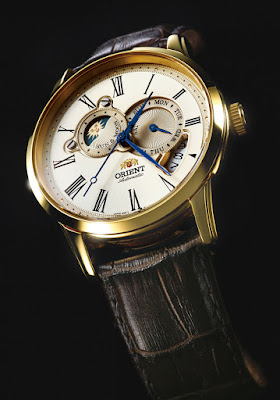 Another trend that became very popular in the last 2-3 years of the World Stage collection, was the introduction of "his and hers" models. A few examples of these items were covered in the blog's review of Orient watch pairs.

Mentioned above are just a few examples of dozens of watches included with the collection. Among them were even a few M-Force models. It appears that throughout the near-decade of the collection, it has spanned many references that Orient found could be interesting to the global market.

The marketing definition of the collection has expanded to a fairly vague description of watches with "sustainable designs", and with a price range of 30,000 to 60,000 JPY (a fairly broad range that would cover much of Orient's portfolio).

And then, like all things vague, the "World Stage Collection" evaporated. Today, as Orient has become relatively well known to watch buyers around the world, there is probably no reason no set aside a collection of models intended to appeal to global markets. Other than JDM releases, any Orient watch could potentially be interesting to collectors, anywhere.