As expected on its sub-brand's 70th anniversary year, Orient continues today to introduce new models into the Orient Star line-up: we so, we get a new Moonphase watch without (!) an open-heart aperture, and a new family of semi-skeleton watches. 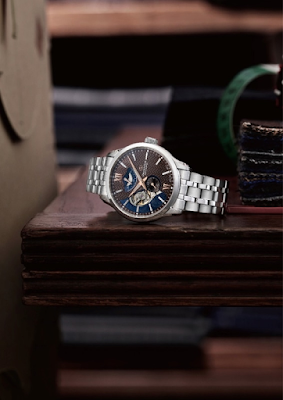 Orient are trying out a new style of semi-skeleton design with this model. Featuring the time, small seconds and power-reserve indicator, the watch dial is given added depth by applying different textures, making it appear as if a full-plate dial is slightly peeled off to reveal a little bit of its underpinnings.

The watch measures 41mm wide, 48.3mm long, and 13.6mm thick. Lug width is 20mm. Front crystal is sapphire while the caseback is covered in mineral glass. 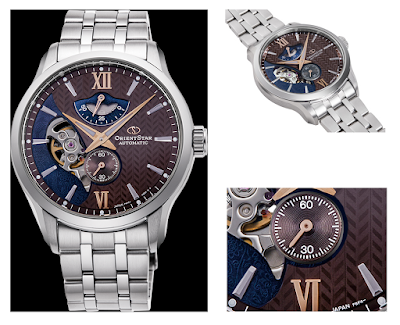 Five references will be released, officially on March 25:

·         Reference RK-AV0B04S would be sold exclusively on "Prestige Shops". It has a white dial, and is sold with both a bracelet and a leather strap.

·         Ref. RK-AV0B05E is the Orient Star 70th anniversary model, and will be limited to 700 JDM pieces and 700 export pieces. This model comes on a leather strap and features a uniquely painted green dial. 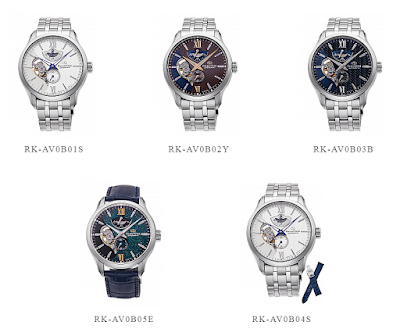 All models use Orient caliber F6F44, offering 50 hours of power reserve, and a stated accuracy of +25/-15 seconds per day. The different models are all priced the same, at around 900 USD.

The blog's verdict: it's the sort of designs one needs to see in person to appreciate whether they pulled it off successfully or not. However, we're being optimistic, given Orient's experience with semi-skeleton designs, that this is likely to turn out pretty good. 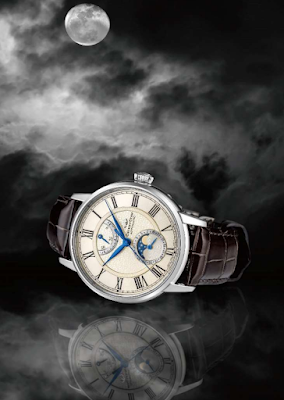 The new Moonphase model would please many fans of the brand and of the concept of a moon phase watch, who preferred a simpler dial design without an open-heart feature. Unfortunately, only a single reference will be released – RK-AY0108S – and it will be limited to 200 pieces only available exclusively on Orient's "prestige shops" in Japan.

This is the lowest production volume of any recent Orient model, and it also priced slightly lower than the open-heart versions, at around 1700 USD. Therefore, It would likely be sold out rather quickly. It is expected to arrive in the stores on March 18. 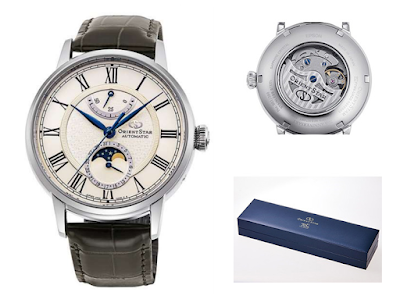 The specs are very similar to those of the open-heart versions: dimensions are still 41mm wide, 49mm long, and 13.8mm thick, crystal is sapphire front and back, and water resistance is 5 atm.

The movement is Orient's caliber F7M65 – probably just a non-semi-skeletonized version of the F7M62 that drives the brand's open-heart moonphase models. It has an accuracy of +15/-5 seconds per day, and keeps a power reserve of up to 50 hours.

The blog's verdict: yes, thank you and we want more!