A couple of weeks ago the blog featured a brief retrospective look at Orient's semi-skeleton watches. Today we are going to take a deeper look at one specific model, the beautiful Orient Star ref. WZ0241DA – a limited "Prestige Shop" edition of the open heart design, characterized by its deep red dial. 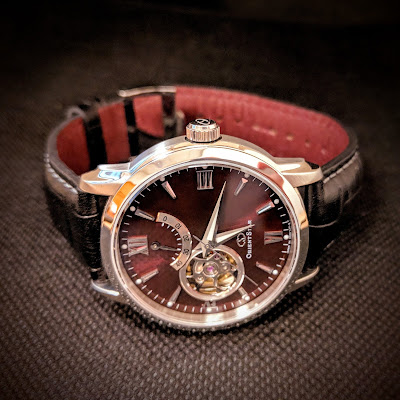 The watch has a classically sized steel case that's 39mm wide (excluding the crown) and 46mm lug to lug. Lug width is a standard 20mm, and not any odd number – which surely makes many readers happy. Inside is caliber 40R54 – not the latest generation F6 movement – presenting the time with central seconds and a power-reserve display. No date wheel here.

It's worth noting that this is one of the older models still featured on Orient's current line up, and Orient have it positioned in their "classic" segment. Currently you can also find F6-driven Semi-Skeletons Orient Stars, positioned in the brand's "contemporary" segment. The main visual difference would be in the shape of the case: the classic case has lugs that stick out, while in the contemporary design the lugs flow more organically from the case sides. 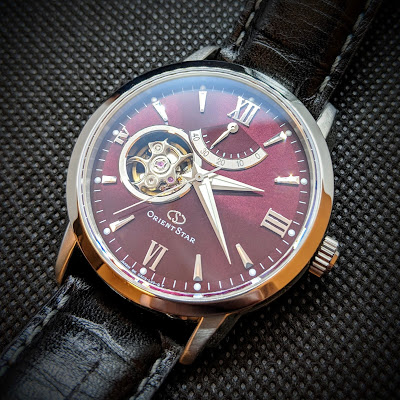 Well, just look at the photos! This is one seriously gorgeous watch, primarily thanks to its dial. We already know Orient makes some fine red dials, and this is no exception. The color is the deep burgundy of a full-bodied wine, with a sunburst effect that lets brighter shades of red shine when light rests on the watch at the right angle.

The applied markers – a mix of roman numerals and sticks - are also well made, and appear crisp from afar as well as upon closer inspection. 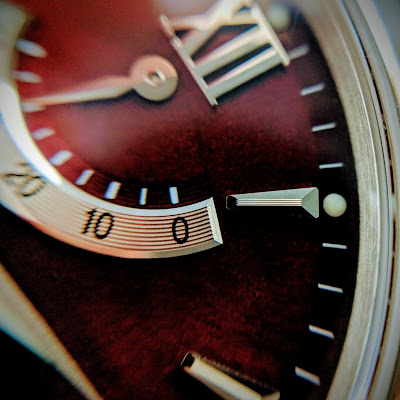 The case is brushed on the sides and polished on top. The lugs have a unique shape, typical of many of Orient's "classic" models. I have noticed, on this as well as some of the other models having this design, that these lugs seem a bit off on official photos; in real life however, they look good, and the mix of polished and light brushing they feature has a nice effect.

The other highly noticeable element of this watch is, as its name implies, the semi-skeletonized section of the movement with the balance wheel visible through the aperture in the dial. While not always the most welcome feature in watches that boast such a nice dial as this, it actually works: the shiny metal parts therein match the markers and case, the round frame of the aperture mirrors the bezel, and the red synthetic ruby at its center (one of 22 stones in this movement) just goes so well with the dial. 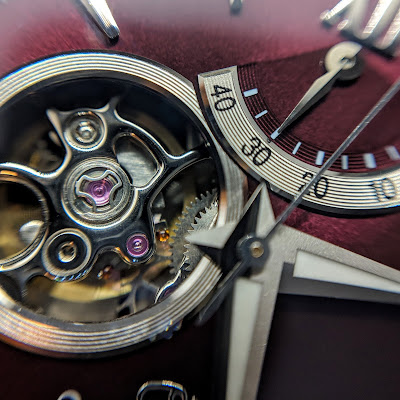 The size of its watch makes it high versatile, and it should match most wrist sizes. While not particularly slim at 12mm, it comes off as fairly low-profile on the wrist, and definitely works as a dress watch. At the same time, the red dial and open heart add a bit of sporty nature to the watch, and it would work just as well with a jeans and T-shirt. 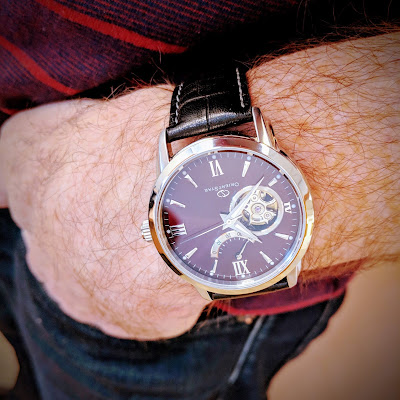 The black strap that comes with this watch is one of the "stiff now, softer later" breed. As such, it is not brilliant – but okay. I don't think it's better than straps that I've seen on recent Bambinos that I have reviewed (and those are considerably cheaper watches).

Note that some members of the family (references WZ0xxxDA) do come with a steel bracelet. Orient Star bracelets are generally of very good quality, so if you come across one of those models – it should make for a very attractive offering! That said, I think a black strap does match this dial better.

The movement inside, as mentioned, belongs to an older generation than Orient's current F6 family of calibers. The upside it that its long-term reliability is well proven; the downside, is 40 hours of power reserve, compared with 50 hours generally provided by F6. Also, the F6 semi-skeleton movement (F6R42 is the equivalent of the 40R54) is further skeletonized compared to its older counterpart, with certain supporting elements removed from the top bridge holding the balance wheel, so the view of the movement beneath is clearer. 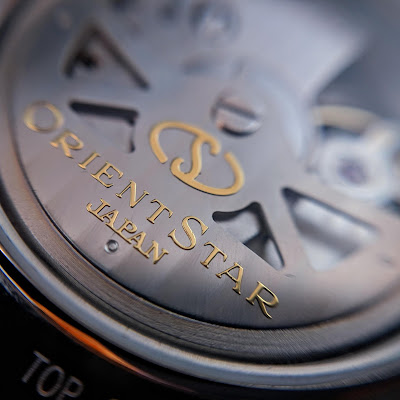 In itself, it's a very good movement. It hacks and hand-winds; and while specs are officially +25 / -15 seconds a day,  the watch reviewed does minus 4 seconds a day, which is within specs. That said, if this watch was intended for regular daily wear, it'd be better off regulated to speed up slightly.

One thing noticeable about this movement (and we've encountered this on other pieces that use this or a similar movement) is a certain roughness while winding it, as if there is a little too much friction. This is normal, but takes some getting used to. 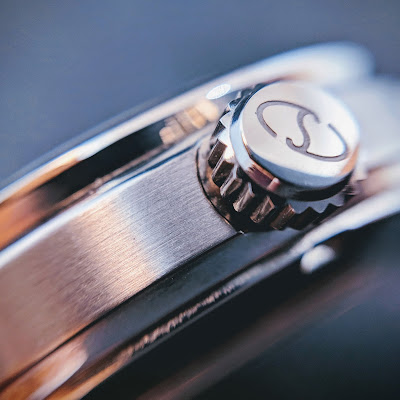 Legibility on the watch is excellent – the hands and markers contrast well against the darker dial. And while the lume is not abundant at dive-watch levels, it is quite sufficient for a dress watch, with lume dots at each hour as well as on the hands. The greenish hue of its luminescence does however clash with the red dial, so in conditions where it's dark enough for the lume to become visible but the redness of the background still shows, the result is a little strange.

Front crystal is sapphire, and the watch is rated to a very practical 100 meters. The exhibition case back is covered with mineral glass – which is a sensible choice.

This is a proper Orient Star, as we have come to expect: a beautiful watch that does not look like anything other than an Orient, very well finished, comfortable to wear, fairly versatile, and with only a few small quirks. 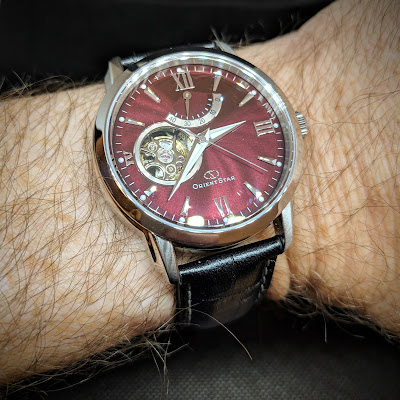 Price for the WZ0241DA, like its non-limited siblings, is 700 JPY – currently around 650 USD. While officially only available to buy at Orient's Prestige Shops in Japan, it can occasionally be found online. Note that due to its rarity, you are not likely to find it at better prices – in fact, online sellers sometime ask a higher price for this watch – new in the box, of course.

If you are in the market for an open-heart watch – or in fact, any kind of sporty-dressy watch – at this price level, and looking for something more interesting than the standard black/white/silver color schemes – this Orient Star is an option that you should definitely consider – and if you cannot get hold of this limited edition, perhaps another member of the family might suit you, such as the blue dial WZ0231DA, or the newer, teal dial RK-AT0003E.