Orient's Use of Color

One of the differentiating elements of Orient's designs over the years, has been the brand's use of colors.

Colorful dials were quite common in watchmaking in the 1960s, 70s and 80s. All Japanese brands were presenting cheerful colors – for instance the Seiko Vanac line featured richly painted dials often enhanced by faceted glasses, and Citizen had many of its cool 70s chronograph dials dyed so as to create contrast between the main and sub-dials, to give just two examples out of many.

In the 1990s however, it seemed popular tastes were shifting toward more somber, monochromatic designs, hailing the legibility of black and white, with bright colors reserved for small elements such as a red tip on the second hand.

Citizen quickly adopted this design philosophy, and much of its current line of watches is black and white. Seiko still plays with color, but – if I may – rather sluggishly (I'm thinking of that purple and blue Zimbe Sumo…) and its more successful designs stick to monochrome – such as SKX007 and SRP777. This is obviously an intentional choice, as both these brands very successfully incorporate color into their less common, high-end, Grand Seiko and Citizen's Campanola.

And yet Orient kept its designs colorful and fun throughout the years, across all models – from the basic "3 stars" up to Orient Star. In almost every Orient line there would be a color for everyone. I find this to be one of the brand's main attractions and a key differentiator.

The use of color could be fairly subtle. For instance, this first generation "EX00" M-Force, is mostly black, titanium grey, and gold. But then there's the red, yellow and blue power reserve gauge, turning an otherwise solid diver into something much more playful. 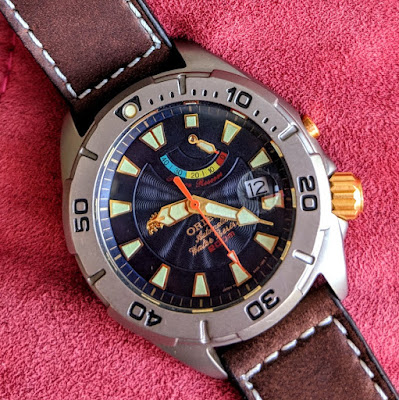 Color could be used to light up the entire dial. Consider for instance the FD models I covered on a previous post. Yes, there's also good looking black and white dialed versions of these watches, but these are definitely the colored versions that stand out.

So if you're into blue dials – a color that became very fashionable in the last 2-3 years – remember Orient have been catering for lovers of blue tint long before it became a trend. 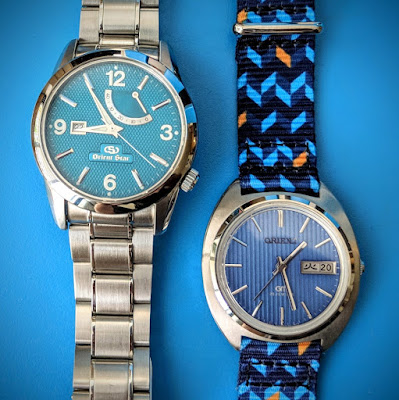 And of course, you don't have to limit yourself to just one main color. Orient's mastery of hues and shades peaks when its designers decide to forget the rules and go all in. Very few watchmakers could pull off dials such as these: 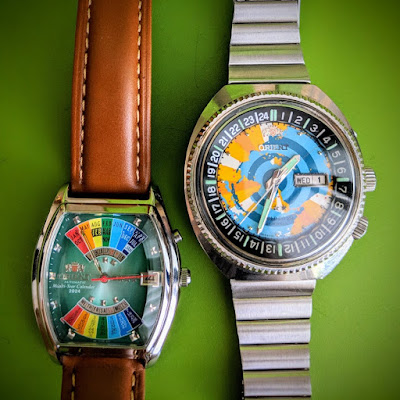 To me, designing as well as collecting watches need not be taken too seriously. While functional, watches serve mainly as wearable works of popular art, and as such – embrace wild colors and cheeky designs whole-heartedly. Yes, you'll want to have at least one respectable, serious-looking dress watch in your collection for when duty calls, but for most daily occasions do consider adding a little (or a lot of) color to your wrist.

Email ThisBlogThis!Share to TwitterShare to FacebookShare to Pinterest
Labels: Color