Orient is well known for its classic, bang-for-your-buck dress watches, like the Bambino and the more upscale Orient Star Classic. However as is often the case, the real gems of Orient lay in the farther corners of the upper shelves.

So it was in those hidden corners, among quirky dials and funky color choices, that I went looking for a new dress watch, about a year ago. And there it was! Browsing old websites and sale ads that were long sold out, I came across the Orient Star reference WZ0071DG – AKA "Oreo". 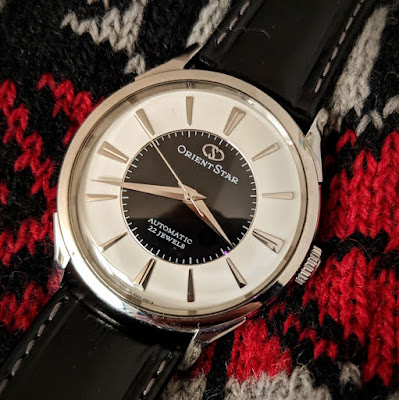 It quickly became clear that was no easy catch. There were no Oreos currently on sales – anywhere. But, where there's a will there's a way. I have found an eBay listing for the watch that was recently completed, but not sold. I messaged the seller, advising him I would buy the watch for the price last advertised if he posts the watch again. Soon enough, the seller re-posted the watch, and I snatched it. One WZ0071DG is in the mail! 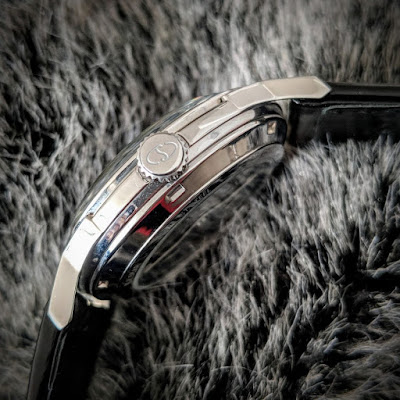 So what's it like in real life? First, as a seasoned Orient collector would by now have expected, it looks fantastic, and better than the pictures. The black and cream dial is a winner, a true classic. It is a combination that was not so rare in the sixties but is nowadays fairly uncommon, and even when being used (as in the Omega Seamaster Olympic Games 2018, for example) it does not come close to the neatly harmonic arrangement of the Oreo dial.

The harmonious look is greatly supported by the symmetry of the time-only display. No power-reserve, not even a date window, and not a lot of text either – just the Orient Star logo at 12, and "Automatic, 22 Jewels" at 6. All are nicely packed inside the 38 mm wide (without the crown), 12 mm thick (with the box crystal) case. 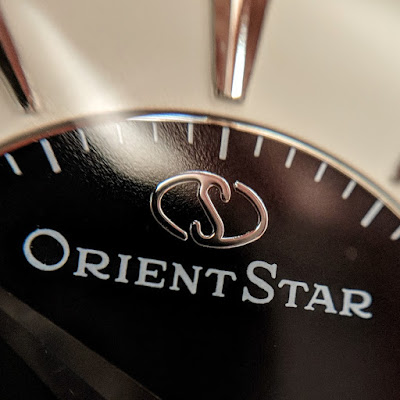 Now, this is Orient Star, so it is not just about looks – this is very much about execution as well. The thing is loaded with quality, as some macro shots very clearly reveal.

First of all, it's the warmth of the dial. Some watches really benefit from a bit of glare, a sunburst effect or some sparkle, but the understated design of the Oreo really does not need such effects. What does elevate the beauty of the dial is the eggshell texture, which turns the otherwise cold monochromatic geometry into a much friendlier affair.

Everything else is just as well made – hands, markers and all other dial elements are crisp; the case is well made, with some nice angles making the lugs not as trivial as may seem at first glance. The leather strap that the Oreo comes with is not amazing but is nice enough, quite comfortable and definitely not as stiff as its shiny color seems to imply, and the Orient Star buckle attached to it is really lovely. 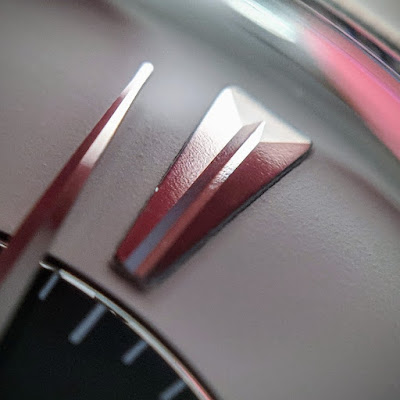 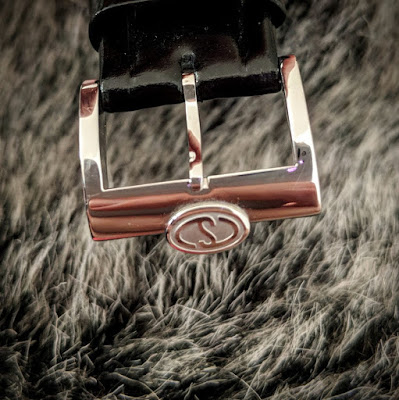 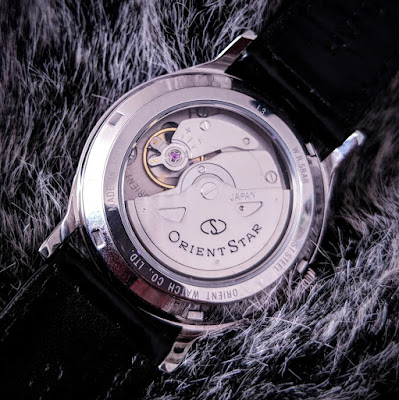 Inside the watch is an Orient automatic, hand-winding and hacking movement. Movement spec is officially -15 to +25 seconds a day; Mine does about +8 seconds a day, which is good enough. The movement is moderately decorated – nothing fancy, but it still makes a nice view through the case-back mineral crystal.

Winding is easy – the crown is small but easy to grasp. On the wrist, it's a joy to wear – and why wouldn't it be? The small, slim case is lightweight, and slips easily under a shirt cuff. 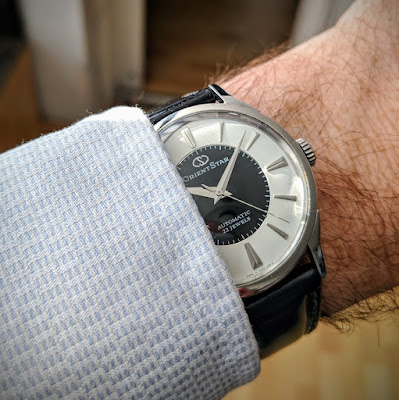 Bottom line, this is one seriously cool watch. It has vintage looks and proportions, but is equipped with a reliable modern movement, and is very well built for what it costs. Originally priced at around $500 USD, this model did not depreciate, on the contrary – mint exemplars don't go out on sale very often and when they do the asking price is typically around $700.

Nobody likes to pay more for an old watch than what the ticket says, but then again – if you're looking for a classic looking black and white dress watch, it's not like you have too many alternatives. Even at $700 the WZ0071DG feels almost like a bargain.