Are Orient and Seiko Truly Independent?

We all know Orient is owned by the Seiko Group. But what does this actually mean? Are the two brands independent, or does "Seiko tell Orient what to do"? Let's explore this a little bit.

First of all, it is important to understand that technically Orient is not "owned by Seiko" as in "owned by the Seiko Watch Corporation". Seiko Watch (alongside SII that make the movement parts) and Orient are both subsidiary companies within two branches of the Seiko Group, each branch forming a holdings corporation in its own right. So in this sense Seiko and Orient are both equivalent brands in the group hierarchy. The difference being that Seiko, the larger brand, spans a number of companies that take part in the making and marketing of their watches, while Orient is very much an integrated manufacturer. 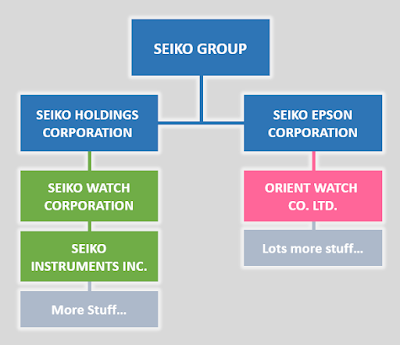 Seiko Group have in the past claimed that both branches are managed independently. Considering also the pride Japanese employees at all levels take in their belonging to an established company, and the significance of hierarchy in this business culture, it makes sense that indeed there is a great deal of independence and possibly even a healthy dose of competition between the brands (just think of how two teams within Seiko itself were competing back in the old days of "Grand Seiko" vs. "King Seiko").

Now, dependence or links between watch manufacturers can manifest in different ways: it could be shared components or designs; avoiding competition or some form of splitting the market between them; shared marketing channels, and so on.

As far as shared components, these seem to be negligible. Orient has indeed used Seiko movements on a few occasions (for instance with its GM movement years ago, and more recently in its mechanical chronographs). However these were fairly insignificant offerings, produced in far smaller numbers compared to the brand's main product lines. It wouldn't make sense for Orient to produce in-house movements for these products, and taking them from Seiko was a sensible business move regardless of corporate relations. Anyway, it seems that between the 1960's until present times, Orient's use of technical knowledge and designs originating in Seiko, has gradually diminished.

Design-wise, Orient and Seiko are quite distinct. Yes they each have their basic three-handers that can sometime appear similar, but as soon as you start looking at more elaborate offerings – the different approaches to the relationship between form and function become obvious. There are some very broad common lines that could be attributed to a Japanese design philosophy, but those could be just as evident in Citizen watches as well – in general, I don't think Orient's classic designs are closer to Seiko's than they are to Citizen, the local competitor.

The only incident that comes to mind where Orient dropped a product line that could have at some point competed with Seiko, was the termination of the Royal Orient. But as I have argued on a previous post, this decision seems to have been justified in its own right.

So – it really appears as though the two brands have almost complete freedom as far as design and production. There does indeed seem to be many shared distribution channels – western retailers that sell both Orient and Seiko – but this seems to be more the result of sensible logistics (importing from the same part of the world) and attracting similar customers (looking for affordable mechanical watches, dive watches etc.)

What do you think?

Email ThisBlogThis!Share to TwitterShare to FacebookShare to Pinterest
Labels: seiko