The GM is a little-known line of models from Orient, which I believe any Orient collector should know. Today I would like to tell you about my GM, A unique piece with a story…

In the late 60s Orient wanted to join the "arms race" to high beat movements. It first developed the "tenbeat" (presented in 1970), an ultra-rare piece sold in minute numbers which I can only assume did not cover the cost of development. Not that there are any available articles discussing what happened back then, but being an industrial engineer and business manager, I think that is a pretty safe assumption.

Looking for a commercially viable endeavor, Orient chose a more sensible approach, an 8 beat movement for an affordable watch. So they went to Seiko and sourced their brand new 5216A movement. This was a member of the 5200 family, acknowledged as one of the best 8 beaters at the time, that was driving some of Seiko's finest models like King Seiko and Lord Matic. Orient dubbed it the caliber 26960 and placed it inside a new model line - the GM.

That was the only Orient produced with a Seiko movement prior to the latter's acquisition of Orient; and to the best of knowledge one of only two such cases ever, the other being a more recent attempt by Orient at mechanical chronographs, powered by a Seiko chronograph movement.

The GM line too did not last for long. Only a few variations were made around 1970-71. Not as rare as the tenbeat but still difficult to find in good condition, I somehow stumbled upon this one NOS. With the tag and stickers still on! 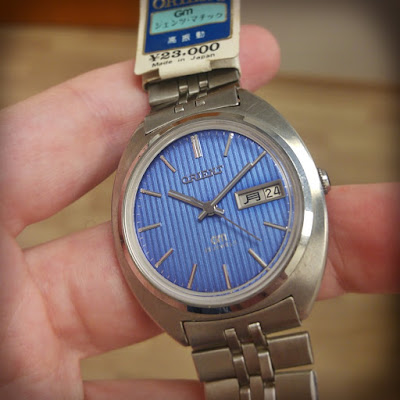 This particular GM has a lovely blue textured dial with just the right amount of shine, a finely brushed case with a polished bezel, and an overall slim and elegant look. An absolute joy to wear and behold. 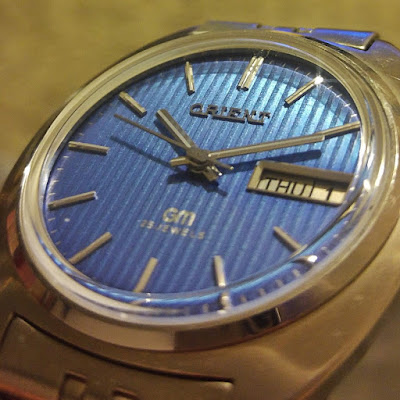 The 5216A was relaunched by Seiko in the 90s as the 4s15, part of the 4s family, positioned very high up the scale of Seiko models of that era. Watches containing either the 4s15 or the older 5216 nowadays fetch anywhere from 600 dollars to well above 1000, if in decent condition. This piece cost less than 300. Another reason to love Orient! 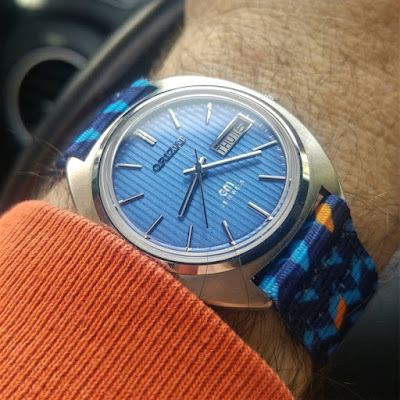