Having often benefited from reference materials provided by others, such as Stephen's list of vintage Orient movements, and Dan's compilation of modern Orient calibers, I felt the need to contribute to the group effort.

And, as I could find no well-organized online source of Royal Orient movements, it made sense to produce such a document. Pre-owned Royal Orients, while fairly hard to come by, represent an interesting proposition to watch collectors – they are mostly a bunch of very well made watches, housing decent movements, some encased in materials like silver and gold, and generally costing way less than comparable Grand Seiko watches (not to mention Swiss brands).

Looking at online listings of pre-owned RO's, they often lack in technical details – possibly not even known to their current owners. So I find that sharing such a list of Royal Orient movements would surely benefit both current owners and collectors looking to buy one. 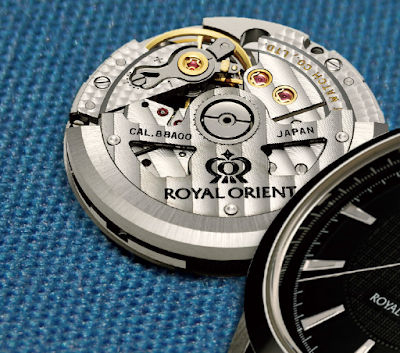 First of all, many of the movements used in Royal Orient are not the same as those used in regular Orients or even in Orient Star pieces. Being both unique and rare, finding information on these movements proved to be anything but trivial.

Now, I have limited myself to movements used in modern Royal Orients, dating more or less 20 years back. I also tried to make sure all information was cross-referenced between two sources at least, and in some cases more (when contradictions were found). Indeed I did come across misinformed sources. The following data therefore represents my best efforts to maintain accuracy. However, any information pertaining to old Orient movements may be prone to errors, so I would be grateful to any reader who finds an error for sending me correct details. 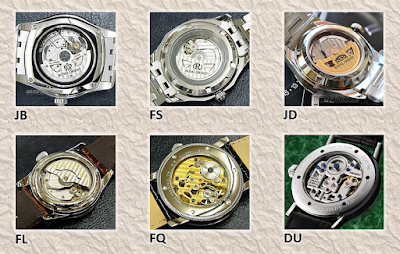 Below, you have the full information, both as a text table, and as an image. The text tables I had to break in half to keep in the format of the blog pages, but they are important so people using a search engine to find information would get to them easily. The image, provides you with all the data on a particular movement in one continuous row.

For those not familiar with Orient's JDM reference system, the movement code is represented by the last two letters of the model number. For instance, Royal Orient ref. WE0011JD uses the "JD" movement, corresponding to Cal. 40B50. 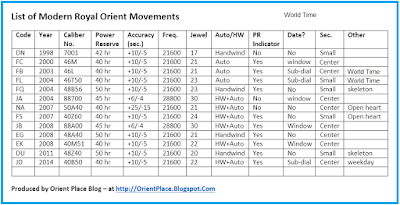 I hope you find this interesting and, perhaps, even useful! Please follow this blog – you'll be getting the best Orient-related news, stories and reviews. You can also follow by liking the blog page on Facebook at https://www.facebook.com/OrientPlaceBlog