Orient released the first generation of the Bambino in 2012. The watch, which combined classic elements used in Orient dress watches since the 1950's into a simple yet characterful design was an instant classic.

Since that time, Orient released many new versions and variations of the Bambino. In early 2018, they launched the Bambino Small Seconds. Interestingly, the small seconds feature isn't an "added complication", but rather can be seen as a simpler mechanism which harks back to the earliest wrist watches; Central Seconds was in fact the real complication, added to wrist watches later on, with the introduction of "direct central seconds" in the late 1940's. 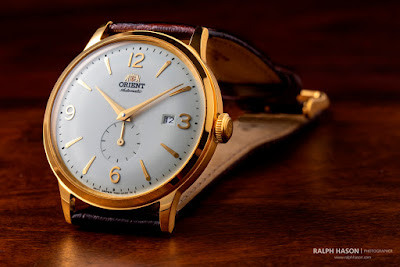 The model we'll be looking at today, is the yellow-gold plated, white dial ref. RA-AP0004S. Like most Bambinos, the steel case is 40.5mm wide (excluding the crown), 45.5mm long, and 12 mm thick (owing much to the domed mineral crystal). It comes on a 21mm wide brown leather strap with a simple gold-plated buckle. Driving the watch is Orient's caliber F6222 automatic, which hand-winds and hacks, and features the date and obviously, small seconds. Like many dress watches, its water resistance is a mere 30 meter.

The Bambino Small Seconds is a handsome timepiece. The dial is not plain white but rather a warmer shade with creamy notes, which goes very well with the golden elements – the case of course, as well as the applied hour markers and hands. This set is nicely complemented by the brown leather strap. First impression, then, is pretty good. 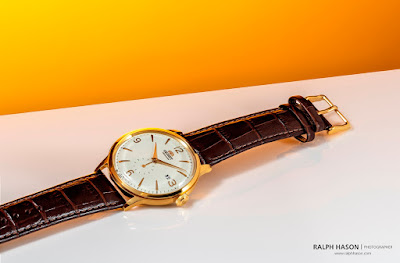 The looks are further enhanced by a number of design and execution features common to most Bambino variations, such as the domed crystal that enhances the warm, vintage-like feel of the watch; the brushed sides of the case and lugs; and the signed crown.

Upon closer inspection, more nice touches appear, such as the circular texture of the slightly recessed small-seconds sub dial, and the smart look of the minute and hour hands – both faceted dauphine hands with a varying angle. The minute hand also bends slightly towards its edge, matching the subtle downward curve of the dial as it reaches the bezel. 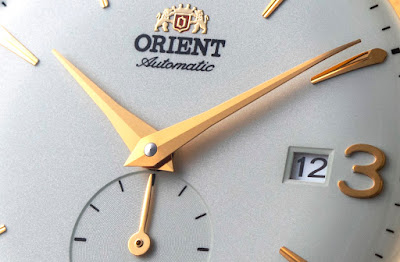 Well, it's a dress watch, and as such – a certain delicacy is expected and appreciated. This is not a heavy-duty watch and it does not feel like one.

What the Bambino Small Seconds does however convey, when you hold it in your hand, is a certain sense of fineness which budget dress watches usually lack. Too often, budget dress watches resort to the convenience of minimalism, which is typically expressed in flat dials, simple hands, and plain finishing. This Orient, like previous (and later) Bambinos, feels exactly the opposite: it's as if a serious attempt was made to pack as much feeling of generosity, luxury even, to this fairly inexpensive, entry-level automatic watch.

At 40.5mm diameter, the Bambino is sometimes criticized for being too large for a classic dress watch. In truth, this is very subjective and depends on personal tastes and indeed, the size of your wrist. For medium-to-large wrists, like mine, the size feels just right, and this is aided by the relatively short lugs.

Thus, the watch wears very well on wrists of size 7" and upwards. I'd say, even for a 6.5" this should wear well, albeit not giving off as classic a dress-watch appearance as, say, a 38mm case would. 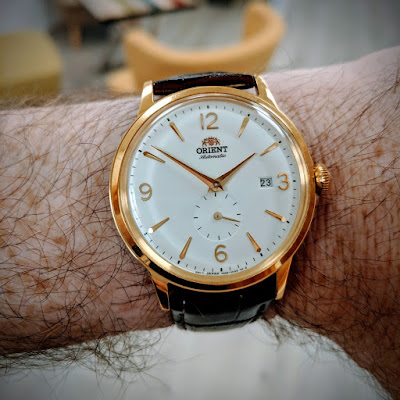 The leather strap that comes with the watch is fairly good – the faux croc pattern and dark brown color coupled with just the right amount of padding, make it soft enough and comfortable to wear. Indeed the 21 mm lug size might limit your choice of after-market replacement straps, but only so much; do a little research and you'll find plenty of off-the-shelf as well as custom strap options to fit any budget.

The Bambino Small Seconds is simple and functional, it hides no dark secrets. The cal. F6222, visible through the exhibition caseback, belongs to Orient's current family of movements, the F6. We expect it to be as reliable and low-maintenance as most Orient movements are (thanks to their simple, proven architecture). Winding and setting the watch is easy enough, as the crown is grippy, and not too small.

Legibility is as you would expect from a dress watch – i.e. one that offers no lume. In normal light conditions, the clean large dial makes it very quick and easy to read the time. As it gets darker though, legibility would soon fade away.

Orient's Bambino family of watches is justifiably popular, and the small-seconds variant makes no exception. It is elegant and well made, and driven by a capable automatic movement. 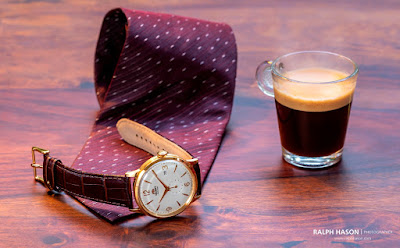 Officially priced at around 370 USD, the Bambino Small Seconds can be found under 200 dollars at a number of online retailers. At this price it definitely presents excellent value for the money – providing its buyer with a very wearable dress watch, sufficiently impressive on the wrist, and not heavy on the wallet.

We would have been happier still if the watch featured sapphire as its front crystal (as indeed some other Orients at this price point do, like the "Symphony"), as the added sturdiness would have made it even more of a long-term investment. And indeed, it would have been nice to have the same design available in a smaller size, in the range of 37-38mm, in addition to the current size.

Generally speaking, it is very hard to find any major flaws with this model. Subjectively, some may find the watch too large for their wrist, or claim the design lacks originality; Objectively though, this is a great watch for the price.

The blog would like to thank Orient – Epson Europe for providing us this Bambino Small Seconds for review, and Ralph Hason, for the excellent product photography.