A couple of new models, each with a number of variants, are announced today by Orient. The announcement comes as no surprise to avid blog readers, as these were very much anticipated based on the hints we exclusively received from Orient, and reported here. 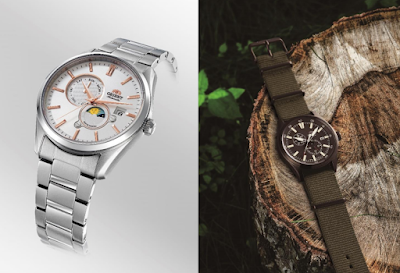 First up – a new version of Orient's much loved Sun and Moon watch. All Sun and Moon models feature a nice illustration of the Sun and Moon rising and setting instead of a standard 24 hour display, and this does not change in the new edition.

What does change though – in a good way, we think – is a reduction in size compared to the previous version of the watch. The case is now 41.5mm wide (instead of 42.5, crown excluded, in the previous "V4") and 13mm thick (instead of 14mm). Lug width remains a convenient 22mm.

The lug shape is changed to a simpler shape compared to the previous version, which flows more naturally from the case. Orient claim that in doing so, they are placing the new model in their "contemporary" collection, as opposed to the "classic" collection where the previous model was.

On the dial, the elements have moved around slightly, with a normally-sized date window at 3 o'clock replacing the previous elongated window at 8. Also, applied hour markers are now used instead of the numerals painted on most previous versions.

Below are the five variants of the new model, with reference and price (in JPY). 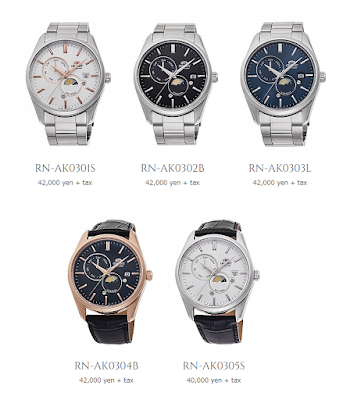 The blog's verdict: well done! The new case does look better and more modern, and the changes in the dial are small but positive. If you liked the Sun and Moon before, you'll like the new release even better.

Next, it is a new version of Orient's field watch, also known as the "Defender". The new model is immediately recognizable as a successor to the previous Defender, bearing the familiar 24 hour and weekday sub-dials.

The case of the new model is similar in size to the previous one, at slightly over 42mm in width and 12mm thickness. What has changed though, is the positioning of the crown, which moved from 4 to a more standard 3 o'clock. Some will like the new look better, some might have preferred the previous position for convenience.

On the dial, things are both familiar and slightly different. The date window is now at 3 (is Orient trying to align more of its models around a standard positioning of the date?). The 24 hour sub-dial is larger, which sort of makes sense in a "field watch", while the day sub-dial is smaller.

Inside the watch however a more significant improvement is introduced, as the old 21 Jewel, non-hacking and non-hand-winding caliber 46B40 is replaced with the new 22 jewel, hacking and hand-winding automatic cal. F6B22. 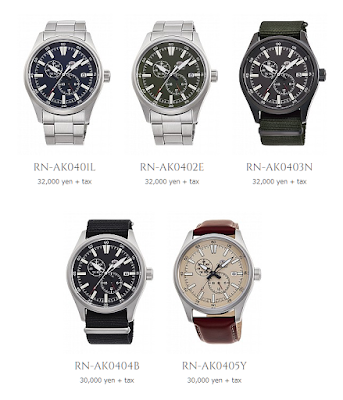 The blog's verdict: good job! The new movement is definitely a very positive step, and in the looks department, while impressions might be subjective, overall the watch retains its utilitarian appearance and tool-watch character.

Email ThisBlogThis!Share to TwitterShare to FacebookShare to Pinterest
Labels: News