Netuno is one of the most iconic models of Orient Brazil, the unique branch of the Japanese brand discussed in a previous blog post. The watch not only goes deeper than any other current Orient with its 500-meter rating – it also went further to become possibly the most popular worldwide of the Brazilian sub-brand's designs. Popular in Google searches, that is, as getting your hands on one is not so easy unless you live in Brazil or visit there.

Luckily I was able to get hold of a Netuno, officially reference 469SS073, thanks to my friend Ron G. who is always on the hunt for big massive watches to fit his, well, big massive arms! 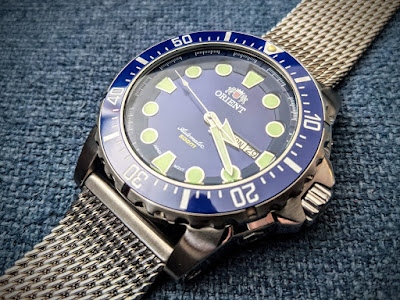 The dimensions are formidable: case width is 48mm, excluding the crown, while the bezel is 46.5mm across; the case is 54mm long from lug to lug, and 18mm thick; lug width is a somewhat unusual 23mm.

Inside ticks the good old caliber 469 – very old in fact, as it's been in production for almost 50 years. It doesn't hack and doesn't hand-wind, but it is known to be very reliable – and serviceable.

The presentation of the watch is quite impressive. Inside the box, you find the watch attached to a mesh bracelet; a second steel bracelet with solid end links; and a bracelet changing tool along with some spare screws. 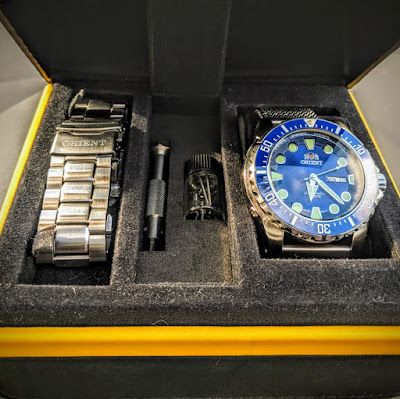 I approached this watch initially with much apprehension and low expectations. I anticipated a watch that would be rough and unrefined, and considering its size – possibly not even wearable for my only slightly larger than average 7.3" wrist.

It looks good! The sunburst-blue dial is charming, very similar to the Japanese brand's blue dials. However, there is an added three-dimensionality, created thanks to the raised and sloped chapter ring, into which the large hour markers are set. 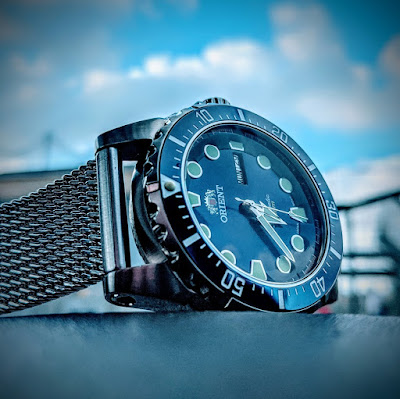 The markers are big and bold, trapezoid at 12, 3, 6 and 9, and round elsewhere. At three you also get a thin, elongated window presenting the date and day of the week. These do not interfere with the overall aesthetics of the dial, which is expansive enough to afford to host these added elements, as well as the larger-than-usual Orient logo. 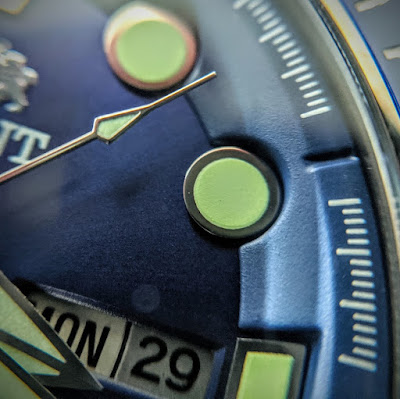 The hands, too, are large and easily discernible even at low light, contributing to the super-high legibility of the watch. Completing the overall looks is the divers' bezel, where the aluminum bezel has apparently been painted and finished to resemble ceramic as much as possible.

Turn the watch on its back and you'll find the big Orient "O" symbol in fine relief. The same symbol is also stamped on the crown. 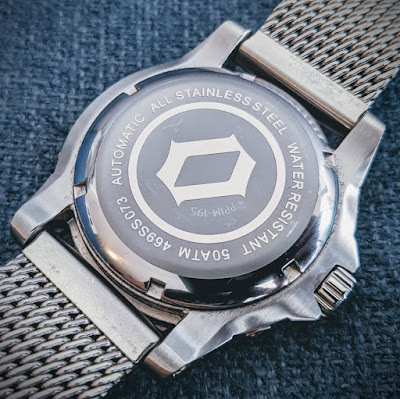 The overall design of the watch is very masculine and pronounced, and in this sense it is quite different from the likes of Orient Kamasu and Kanno. Here you get plenty of sharp angles and no less than 8 hexagonal screws adorning the case, including the four used for keeping the bracelet in place. Not sure if all the other four are functional, or just provide the visual balance (and possibly one of them conceals the helium release valve that this watch is equipped with).

The case sides are polished while the top surface of the lugs is lightly brushed. There's no chamfering or any other fancy finishing here, and the lines where surfaces meet are generally just slightly rounded off. 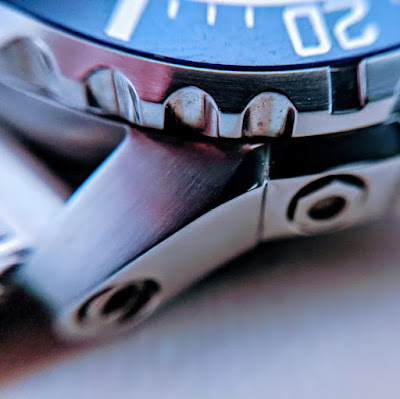 No complaints on the visual side then. The Netuno looks as tough and bold as it was probably intended, but it is far from ugly – in fact, the big blue dial is just as nice as the Kamasu's.

Well, that's the BIG question, isn't it? The answer is, it wears better than expected, despite its substantial 240g heft (more than the 230g of the Orient 300m Saturation Diver). 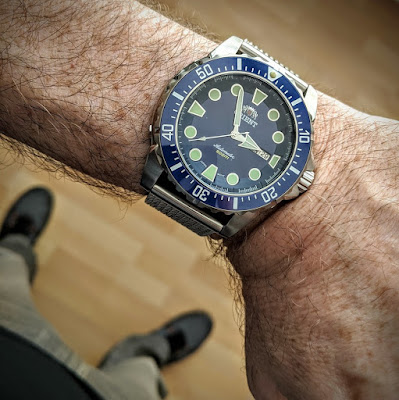 The wearability owes much to the mesh bracelet. While I am generally not a fan of mesh, stylistically, there's no denying its benefits when attached to a big diver like this one. It is very easy to adjust to the right size, over skin or divers' suit, so a snug fit is always ensured.

Thus, as the watch does not dangle around, its weight is felt much less. In fact, I was able to completely ignore it as I spent a few hours of work, mostly at the keyboard, with the Netuno on my wrist. It's also worth noting that the bracelet did not pull any hair, a sign of good quality mesh. 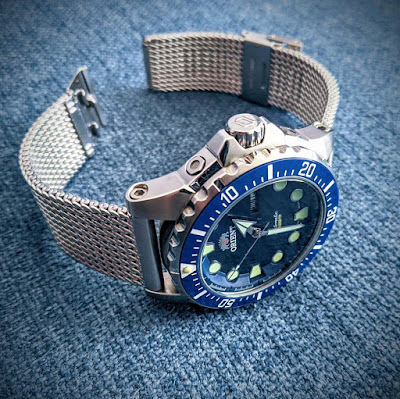 The watch also comes with a standard steel bracelet. I did not size it to wear (because, as mentioned, I got it on loan from a friend) but like the mesh, it seems to be of good quality. Much in the spirit of the watch case, it is solid, got decent heft, and quite well made, despite having a very simple and uniform finishing. So, not as impressive as an Orient Star or the OSD bracelet, but should get the job done. 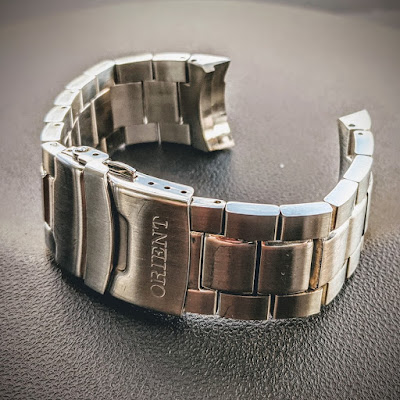 Note that the Netuno uses screw bars, not springbars, to attach the bracelets. While screws are generally thought of as a safer mechanism, they're not as convenient as springbars for owners who like to change straps often - and, they are not at all suitable for those who prefer Nato straps.

First thing to check with a new watch is crown operation. The screw-down crown of the Netuno is very easy to lock and unlock, and the threading feels precise. Caliber 469 does not hand-wind, so the first position of the crown is idle. The second position is used to set the date, and the third – to set the time. All these tasks are easy to accomplish, the crown is large and grippy, and does not wobble like the Mako / Kamasu crowns.

Note that while some cal. 469 variants include a quick-set button at 2:00 for setting the day; this one doesn't. So, you'd be setting the day first by moving the time forward, then get the time set, and then the date – assuming you're doing it at hours when date setting is allowed. Otherwise you'd probably want to get the watch set to the day before, set the hour to afternoon, then set the date of the day before – and finally, move the time forward to the current date and time.

Now let's examine the bezel, a classic 120-click unidirectional divers' design. It feels solid and turns with a healthy click. It does have some back-play though. Comparing it with the Japanese divers, it feels and looks more robust than the Kamasu's – yet having a little more play – and certainly does not come close to the Saturation Diver (but then, very few watches do). 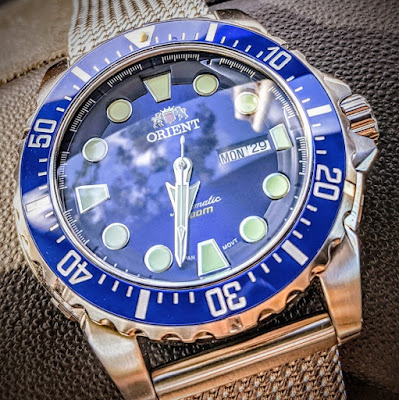 Accuracy is decent for a 469-based watch, and the Netuno tested ran fast about 17 seconds per day. That's not glorious accuracy, and most Japan-made Orient I've tested are better – but it is within specs. As the movement is non-hacking, there is little point in trying to adjust it to much higher accuracy.

One thing that did not really meet my expectations was the lume. Considering the size of the markers and the nature of the watch, one would expect some seriously impressive and long-lasting light show. However lume is only average. It does benefit from the size of markers and hands, so at first telling the time in the dark is effortless, but lume intensity diminishes quickly and half an hour later was too faint to see unless the room was pitch black dark. 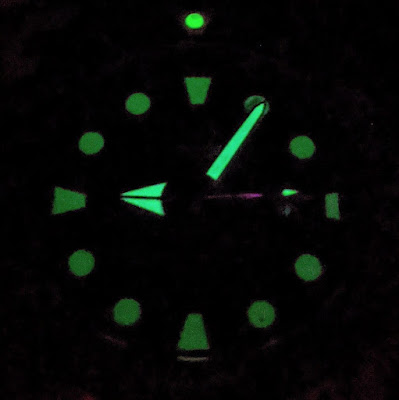 The Netuno is officially priced at around 1,300 Real, which is currently about 240 USD – thanks to the dive that the Brazilian currency took in 2020. It's rare to find it selling for global customers, and then the price would usually be closer to 400 USD, which would have been the right price about a year ago. That is more or less the price range for the Kamasu, where common colors would be close to the lower limit, and rarer ones – higher.

Considering what you're getting for this amount of money, the Netuno is an incredible deal: a real automatic divers' watch, rated to 500m, two good bracelets, helium release valve and all, for 240 or even 400 USD is very uncommon. Add shipping and taxes, depending on where you live, and it's still bound to make a very compelling proposition.

The build quality is more than satisfactory. At this price, you'd be comparing this watch to crowd-funded projects where quality is unlikely to be better overall, or to Chinese divers where you'd most likely be looking at very unoriginal designs. With the Netuno you're getting what looks like an Orient design on steroids, with a very reliable movement, solid build quality, and decent finishing.

One downside is the crystal, which is not Sapphire. A big watch like this is bound to get bumped against various obstacles now and then; the mineral glass is thick and unlikely to break easily, but it will most likely collect scratches over time.

The other drawback is the movement, being non hand-winding, non-hacking, and not the most accurate. Avid Orient fans would appreciate the 469 for its legacy, and it will likely keep working with minimum maintenance for decades, but objectively speaking, it is outdated. 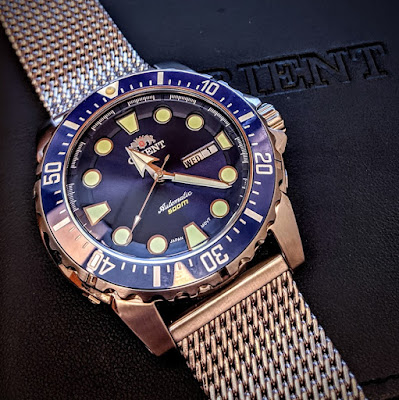 The blog's verdict: Orient Brazil's 500m diver is, perhaps unexpectedly, a winner. It might not be the best choice for most watch buyers who are looking for a modern, modestly-sized, refined desk-diver. But if you're looking for a big, bold piece of metal, with lots of character and wrist presence that cannot be ignored, then the Netuno has some of the best value-for-money in both the southern and northern hemispheres.

The blog would like to thank, again, our friend Ron G. for lending us his watch for a few days. Enjoy your Netuno, Ron!