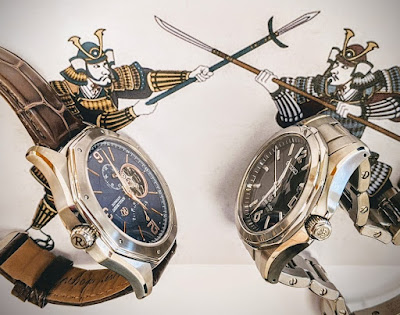 One of the most common questions I get asked is how Royal Orient and Orient Star compare against the famed Grand Seiko brand. Well, it's a legitimate question, and today I'll try to come up with an answer.

First, some background. We have covered Royal Orient's history quite extensively before, mainly in this article. In short, the Royal Orient brand was introduced in 1958, with the intention of offering models that were higher-end than other Orients in terms of mechanical excellence and overall quality.

The first Grand Seiko was actually unveiled two years later, in 1960. Seiko was aiming at very high standards, particularly in terms of timekeeping (though the finishing quality was mighty impressive as well). It was positioned way out of Royal Orient territory, and at 25,000 JPY it was more than twice the cost of the most expensive Orient of the time – very much like the price difference during the 2000s when modern ROs and GSs were being produced. 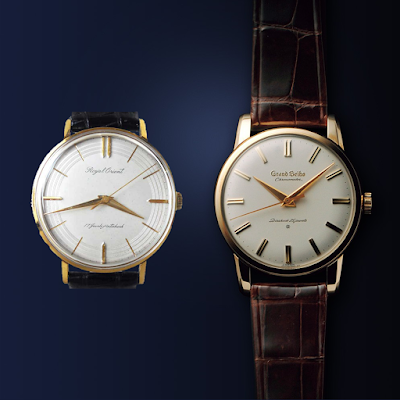 Both watchmakers stopped production of their high-end mechanical watches during the Quartz Crisis of the 1970s. Later it was Seiko who was first to resume production of its Grand brand in 1991, with new mechanical movements (cal. 9S5x) introduced in 1998. Orient was using its mixed branding of "Orient Star Royal" during those years, finally introducing a new movement (cal. 88700) and a proper new "Royal Orient" in 2004.

In 2017, Orient again put its Royal brand to sleep. Grand Seiko, of course, is very much alive today and growing in recognition and sales year on year. 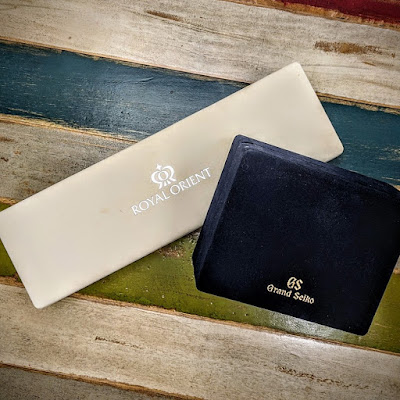 Grand Seiko is very close to the top of normal watchmaking, normal meaning not having mind-boggling complications or ludicrous decorations - just plain and simple timepieces for telling the time. As such, GS offers fantastic movements that aren't only very accurate but also built to last; a very high level of finishing all round; some of the finest hands and dials in the business; and more.

It's not all perfect, though. In my opinion, the bracelets currently provided with GS watches are not as good as they used to be. Owners have noted some quality assurance issues – not necessarily major flaws but occasional exceptions to the expected perfectionist execution. And then, of course, there's the question of pricing, which is constantly on the rise.

Royal Orient came close - in some models closer than in others. No RO was ever as perfect a product as the top of GS, but then, they did cost half as much. RO did offer fantastic case finishing, some beautiful dials, and what they lacked in the pure technical excellence of the movements, they made up for in complications (mechanical GS are completely devoid of complications). The retrograde RO was probably the closest thing to a GS that I saw.

And what about Orient Star? Again, some are more impressive than others. The quality is there. I have handled OS bracelets that were as good as current GS, with dials nearly as beautiful as a GS. However, under a magnifying glass, it becomes easy to spot the differences. You will not find GS-sharp hands and markers in an Orient Star.

OS movements, too, are not up there - they're good, reliable, accurate enough, and served as a good basis for the RO movements. Indeed, with the exception of cal. 88x00, Royal Orient movements were simply OS movements, only better regulated and more finely decorated.

If I were to rate watches by how close their execution is to perfection, Grand Seiko would be 9-10 (but too many currently are 9); Royal Orient of later production runs would be 8-9; Orient Star would generally be 7.

Keep in mind that the economics of quality dictate that the cost of moving from one step to the next in this ladder rises exponentially. The difference between producing a "10" and a "9" is much higher than between producing an "8" and a "9", and so on. So you can understand why prices of OS, RO, and GS behave the way they do. 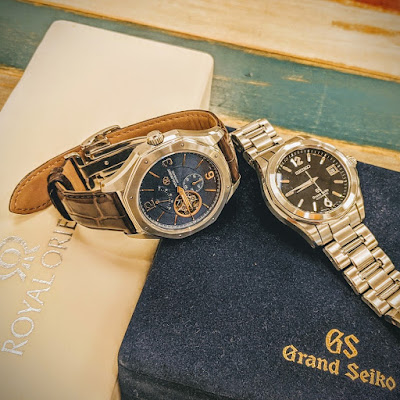 Head To Head: In Practice

To put the theory to practice, I'm looking at two watches from my private collection. However, this comparison might not be the most equally matched: my modern Grand Seiko is one of the brand's flagship models from 2000, reference SBGR019, and it is a flawless product. Everything about it is made to perfection as if the threat of Seppuku hung over every person involved in its making.

The Royal Orient I'm pitting against it is a beauty, but can it stand up to the mighty GS? Let the fight begin, and in the blue corner it's the Royal Orient ref. WE0031FS, previously reviewed on the blog.

I'm not going to do a full review here now, as it's not the point of this article, but just to touch on a few points that highlight the similarities and differences between these two watches. 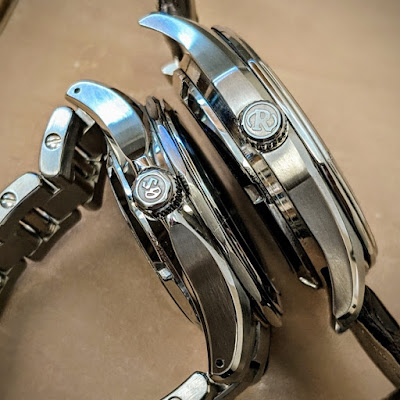 First let's talk polishing. One of Grand Seiko's famous bragging points is its "Zaratsu" polishing, that fine technique enabling mirror-finished surfaces to meet at sharp edges. This GS definitely boasts superbly sharp lines and surfaces all-round: case, hands, markers etc. The RO does not lag far behind, and surprisingly even features wonderfully finished hands. Admittedly though, while the brushed parts are similar, the Grand Seiko's high-polished surfaces reflect light in a more mirror-like fashion than the Orient. 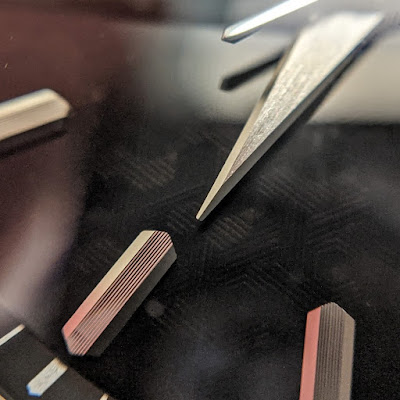 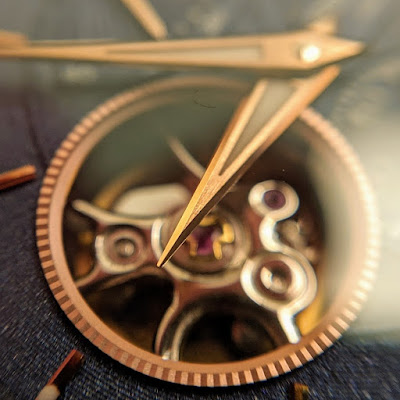 Another element both watches excel at is the dial. The RO's dial immediately stands out with its unusual shade of blue and unique texture. The dial of the GS appears simpler at first, but it is not. The smooth black lacquer hides intricate patterns that are only revealed under strong direct light. 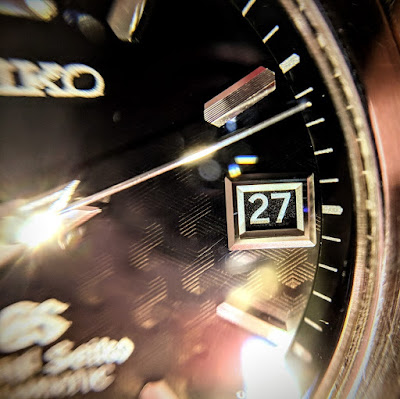 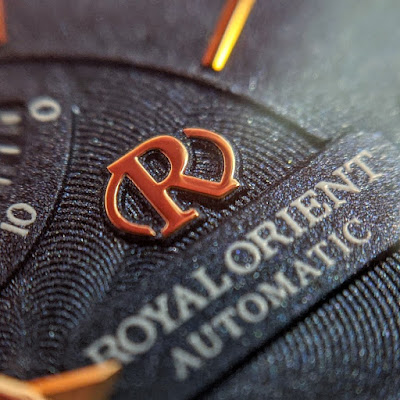 When the Grand Seiko's patterns are not visible, its dial appears much more subdued than the Royal Orient. In the Orient, flashy elements like the open-heart view of the movement and the rose gold markers immediately stand out.

The Seiko keeps its little secrets close to its chest – such as printing the dates using the same silver ink as the rest of the text on the dial (whereas any other brand would use white ink). That said, it seems more recent Grand Seikos rarely go to such lengths. Possibly someone at Seiko said, "why bother if no one notices?" - I'm not saying that many recent Grand Seikos aren't superb watches that look fantastic and have some best-in-class movements in them - but they're much more "what you see is what you get" than this old model.

Now, what about the movement? Seiko's caliber 9S55 is almost as legendary as vintage GS movements, a robust, accurate mechanism built to maintain its precision over time with minimum maintenance and maximum reliability. Orient uses a much more modest movement, cal. 40Z60, working at lower frequencies (6Hz vs. 8Hz), offering lower power reserve (40 hours vs. 48 hours) and officially lower accuracy (-5/+10 seconds per day, compared to the Grand Seiko's -3/+5).

In practice, the difference in performance is minimal. My GS and RO both seem to be +3 seconds per day fast now, which is very good considering neither has ever been serviced. Both wind nicely and seem to be healthy and ready to keep ticking many more years. 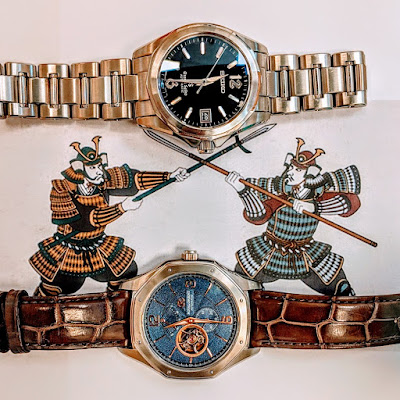 Bottom line, most Grand Seikos and Royal Orients are wonderful timepieces. The everyday experience of wearing, using, and looking at them is comparable, as the Royal Orient's qualities are surprisingly close to Grand Seiko's.

Keep in mind, the price difference between these two watches was significant, when they were new. The GS cost 400,000 JPY, whereas the RO was a mere 150,000 JPY. The premium paid for a GS gets its owner a few extra fine details (depending on the specific model), technical superiority that is almost unmeasurable in regular use but is nonetheless undeniable, and bragging rights that come with a more prestigious name and line of historically important watches.

This premium is the same now when buying a pre-owned watch, as it was when new Royal Orients were available to buy. Was it worth it back then, and is worth it now? If you care about technical bits and historical importance, it is. If you're just looking for an excellent watch – look no further than a Royal Orient. That is, if you can find one…