The Orient of Kings, Reference WE0031FS

Royal Orient. A name that to many Orient fans is a riddle, wrapped in a mystery, inside an enigma; and, at the same time, a true holy grail – not any less, and perhaps even more, since the demise of this sub-brand about four years ago.

Attempting to satisfy the appetite for information on this royal line of watches, and to lift up some of the mystique surrounding it, I have on occasion discussed Royal Orient on the blog, looked at the royal movements and even speculated on the reasons for its disappearance.  Today we're taking one step further to look at the actual beast. Or rather, beauty. 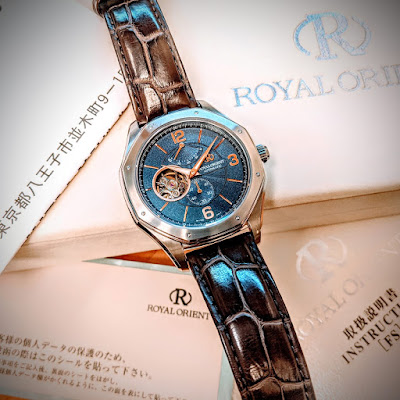 Royal Orient ref. WE0031FS was produced for around a year, between 2007-8 (and then replaced with the near identical WE0061FS for another year or so). It was a member of a small family of "FS" models, driven by caliber 40Z60:  21,600 VPH movement, automatic, hand-winding and hacking, featuring the time, small seconds, power reserve, and an open heart.

Adjusted to an accuracy of -5/+10 seconds a day, this caliber claimed much better performance than its non-royal siblings. It also featured slightly improved finishing – specifically, Geneva stripes on the rotor and base-plate. Not anything you've not seen before, but it's nice compared to the backside of most Orients. 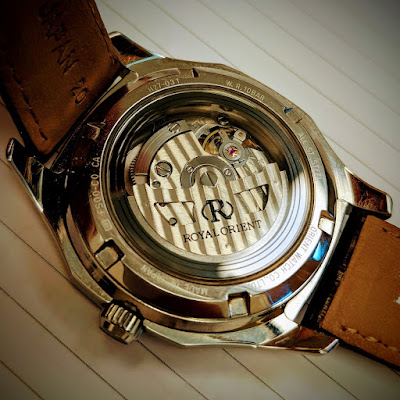 If you examine the open heart closely, you'll notice the visible part of the movement too is not different from what you'll see in an Orient Star; however in this model, the golden decorated frame around the aperture definitely adds considerable glitter. 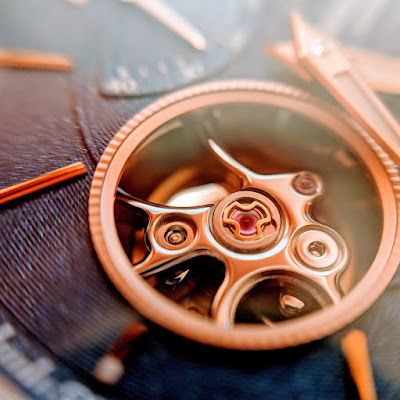 The overall design of the watch is clearly inspired by Gerald Genta's Royal Oak. This is not unlike countless watchmaking brands, both obscure and quite prestigious, which over the last five decades or so got similar inspiration – some producing very close copies, some trying to keep a certain distance from the very recognizable origin.

I think it is fair to say that while Orient did not try too hard to hide the Royal Oak lines, it did inject a lot of their own DNA into it. Between the power reserve and semi-skeletonized dial, this is an unmistakable Orient. 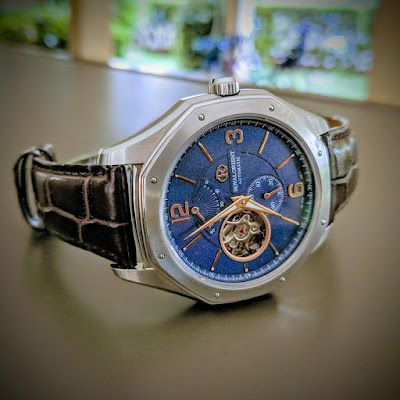 Obviously, the most noticeable and glorious part of the watch is the dial. Seen from a couple of feet away, it appears deep, matte blue, contrasting beautifully with the rose-gold plated markers and hands. Look at it a little closer, and it reveals a kind of sandpaper texture. But one needs to examine it under the magnifying glass to understand how elaborately decorated this dial really is; you then see the different patterns, some wavy, some radial, and the true make-up of the paint job – a kind of microscopic spraying of light and dark blue pigments over a black background, which really looks like nothing else I've seen in watch dials.

Indeed, if there is one element in this watch that is truly comparable to a Grand Seiko it is this dial, not just because of its beauty, but in its design approach: one where almost invisibly minute details mesh together to form a very clear, visible impression of quality. 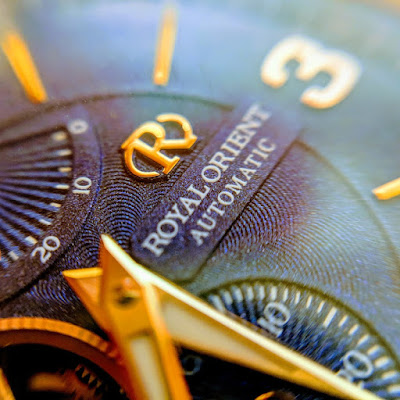 The higher finishing of the watch is also evident in other elements. The 41.4mm wide, 11.7mm thick case for instance, features mostly brushed and fairly complex surfaces, with nicely polished chamfering all round; the bezel is stepped, polished on the sides and finely brushed on top.

The hands and markers are very finely finished. The smaller hands of the power reserve indicator and seconds are smoothly polished, as are the hour markers; the hour and minute hands are brushed and filled with lume, and while they perhaps lack the total surgical precision of Grand Seiko hands, they definitely look fantastic and their three-dimensionality adds depth to the dial. Crystals are of course sapphire, front and back. The 20mm strap is fine crocodile leather, padded to just the right amount; and attached to it is a very comfortable and easy to use folding buckle. 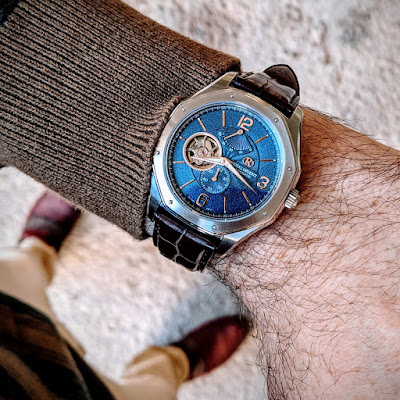 All this makes the Royal Orient WE0031FS a joy to wear. Its size and color scheme provide it substantial wrist presence, however it never feels too big or heavy. 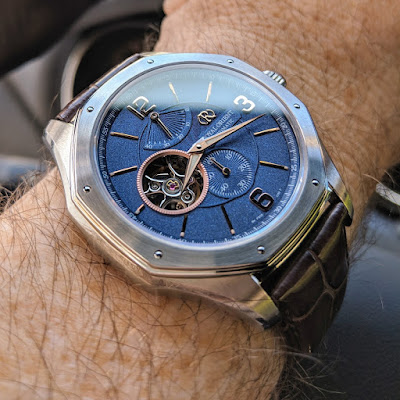 Back when it was new, this model would cost around 1,500 USD; other references of the FS line cost a little higher as they came with a steel bracelet. Finding any FS reference today is incredibly difficult, as they very rarely surface on eBay or other e-commerce platforms, and when they do – you might see prices exceeding the original price tag.

I wouldn't say that paying 2,000 USD or more for this watch would make a lot of sense; however, sense is hardly part of the equation here. You'd usually pay more than 2,000 USD for the simplest of Grand Seiko's mechanical pieces if in good condition – and this Royal Orient here is perhaps lacking in some departments compared to the Grand, but definitely makes up for it in its exclusivity (and I honestly think it looks better than most basic black / silver dial GS).

I definitely paid much less than the price tag for my FS, which just goes to show that opportunities do pop up once in a while, and one has to keep one's eyes open if one is ever to get hold of one's grail!

It had a few scratches (which are barely visible to the naked eye) but came with the original box and papers and strap, does about +2 seconds a day, and is probably as well kept, if not better, than if I had bought it new and worn it since 2007… 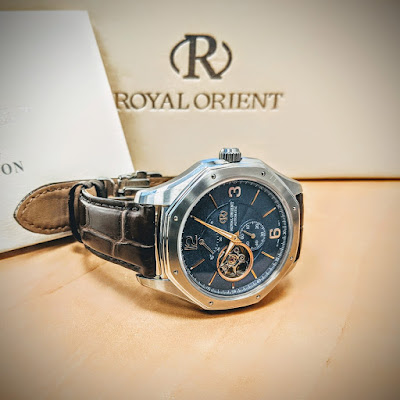 If you are shopping for Royal Orients, pay attention not to be mistaken by the NA line. Royal Orient NA, such as ref. WE0051NA, look very similar to the FS except having central, not small, seconds, and will probably sell for much less; however they are in fact the ladies' version, they are beautiful but less than 32mm in diameter. Both FS and NA line-ups were actually mentioned on the blog before…

The bottom line? This is definitely a very exceptional piece of watchmaking by Orient. Beautiful, impressive, wearable and highly enjoyable. Was it worth, as new, about double the price of comparable semi-skeleton Orient Stars? From a very simplistic, formal point of view, probably not. Orient Stars offer fantastic value for money and mostly very good quality and finesse. However, when you consider the added value of rarity; when you remember that in watchmaking, as in most products, price rises exponentially with every marginal increase of quality; and when you take another good look at that stunning blue dial – things start to make sense for the Royal one.