Watch brands have different ways of showing off their fine watchmaking expertise. One such method is producing skeleton watches, in which as much of the dial and movement bridges are stripped ("skeletonized") to provide a clear view of the beating heart of the mechanism.

Skeletonization is a very delicate art. When done right and skillfully executed, it can result in a highly exquisite timepiece. However, poor design or low-quality execution of a skeleton watch would likely end up looking cheap, hard to read, and generally very far from making a positive impression.

Orient too dipped its feet in the skeletonized end of the watchmaking pool, with varying degrees of success. Let's look at the company's skeleton watches over the years. 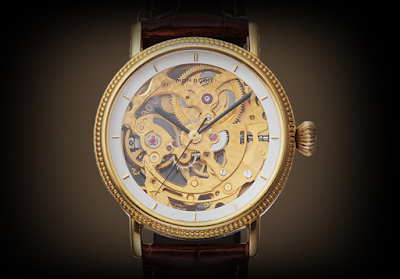 In 1991, Orient introduced the curiously named, and non-Orient branded, "Mon Bijou" – literally meaning "my jewel", in French. A number of Mon Bijou versions were released, all featuring a hand-wound movement, but differing in the style and finishing. 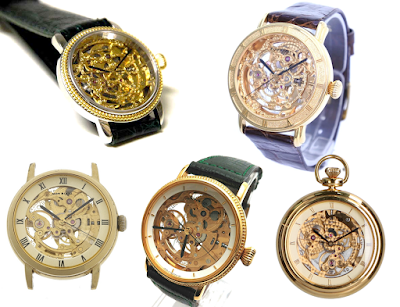 The Mon Bijous were fairly small watches, measuring around 35mm in diameter, give or take (versions did differ slightly). Today you may find it advertised as either Men's or Women's watch, although it really is kind of unisex – with some of the versions leaning more toward the feminine end of things.

Nowadays, these early skeletons may seem a bit over-the-top ornate, their flamboyance out of line with the brand's DNA (and with their petite size…) – but at the time, they represented the top of Orient's watchmaking skills.

A few years later (probably around 2000, though I could not pinpoint the exact time), the skeleton design found a new home under the Orient Star and Star Royal branding. 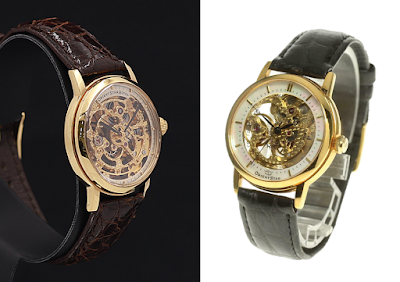 The "Star Royal" variant, ref. EQ00-A1, received the more elaborate execution of the movement, while the mere "Star" ref. EQ00-A2 boasts a more subtle and actually fairly elegant view of the movement. By the way, make no mistake, both are in stainless steel and gold plated. None of the Orient skeletons was ever made in solid gold.

The next iteration of the skeleton came in 2004 with the introduction of caliber 48B56, offering improved accuracy of +10/-5 seconds per day (vs. the earlier model's roughly +15/-7), a power reserve display, and the hacking mechanism missing in the older models. 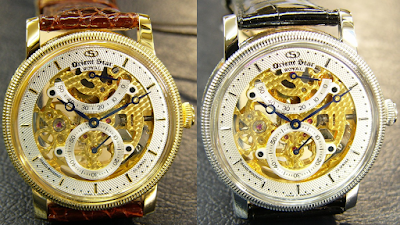 At first, this movement was cased as "Orient Star Royal", with ref. WZ0011FQ in stainless steel and WZ0021FQ being gold plated. These watches also featured slightly larger diameters of 37mm without the crown.

Reference WZ0031FQ joined the pack a little later, bearing only the Orient Star logo and featuring unique bridges very reminiscent of Girard Perregaux's signature skeleton bridges, as seen below in the smaller picture. 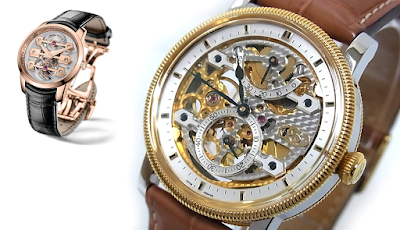 In 2007 came the next iteration of cal. 48B56, this time in full Royal Orient guise, as the Star Royal was now renamed. References WE0011FQ and WE0021FQ were almost identical, except the sub-dial track colors, silver in the first and black in the latter. Also, a thin white line was added to the hour and minute hands of the darker version to improve legibility. Case size grew a little again, reaching 38mm. 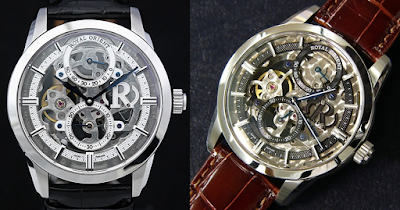 A couple of years later, these were released again as Ref. WE0031FQ and WE0041FQ, differing only in the new Royal Orient logo. 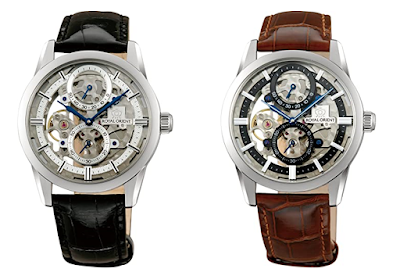 In 2010, Orient introduced the rarest and finest execution of its Skeleton watch yet – ref. WE0011DU. The story of this unique creation was posted here on the blog last year. 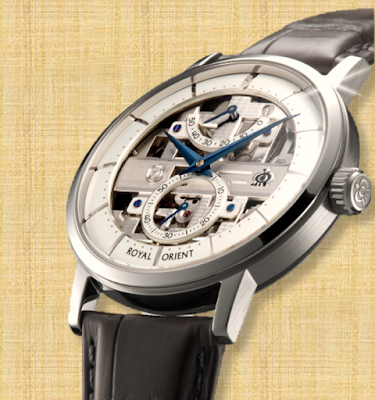 In 2013 Orient announced a new skeletonized movement – caliber 48E51 – and a new line of watches, the Orient Star Vintage Skeleton. Two limited editions of 500 pieces each were introduced: ref. WZ0011DX with a gold-plated case and champagne-colored dial, and WZ0021DX with plain steel case and silver-colored dial.

Once again, the new models featured a slightly larger case, with their width now reaching 39mm. Despite the "vintage" in their name, embodied mainly in the use of an old Orient Star logo, their design was actually more modern, featuring a cleaner look than earlier Orient skeleton watches. 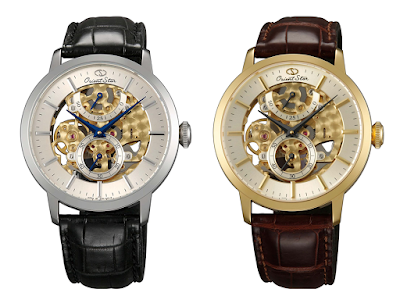 In 2016 Orient released the Orient Star Classic Skeleton, using the same movement but returning to a more ornate dial design. Ref. WZ0031DX featured gold-plating on the stainless steel case, while WZ0041DX kept it clean. The movement inside was gold plated on both though.

Later that same year, reference WZ0051DX joined the collection, featuring dark-brown dial elements. This was a limited edition, sold exclusively on Orient's Prestige Shops. The last member of the DX family, ref. RK-DX0001S, was released in 2017. Here most of the golden elements were removed in favor of a clean silver-grey appearance; even the gold-plated movement was replaced with a similar non-plated version, cal. 48E52. 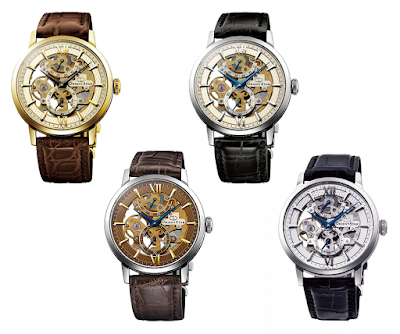 We are skipping a few other watch models like Orient's long-running "Modern Skeleton" collection, and the recent "Avantgarde Skeleton". These do not feature a fully skeletonized movement, and more accurately belong in Orient's broad range of Semi-Skeleton watches.

And so we arrive in 2021, when finally a new movement and a new line of skeleton watches were introduced. As we reported here back in January, Orient presented caliber F8 featuring 70 hours of power reserve, with two new skeleton models housing it - Reference RK-AZ0001S with a champagne-colored dial, and RK-AZ0002S featuring a white dial, both in stainless steel cases. 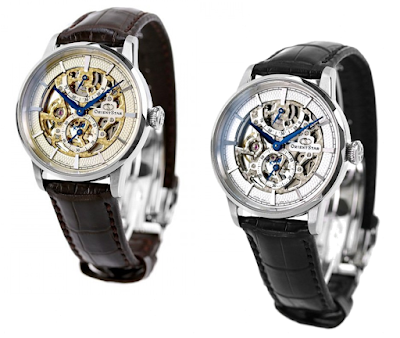 And that's it – you have the full history of Orient's skeleton watches!