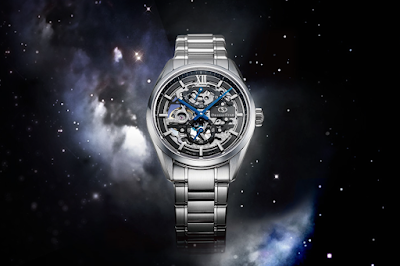 The case and bracelet appear to be of very high quality. Orient is mentioning Zaratsu polishing, and the pictures reveal an elaborate mix of finishes and details of the steel surfaces. Front and back crystals are sapphire, as expected, with the front featuring an anti-reflective coating. 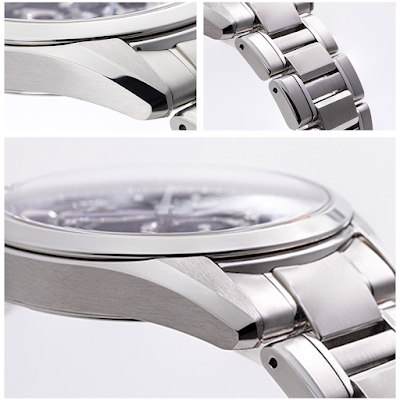 The movement is Orient's in-house caliber F8B61, which presumably is nearly identical to the F8B62/63 utilized in the two references of the classic skeleton. The differences are likely to be purely decorative; since in a skeleton watch much of the design elements are integral to the movement, it makes sense that things like different colors or styles of polishing would entail a new caliber. In this new model, the movement indeed features grey plating on some of its bridges.

The technical specs however remain: it is a hand-wound movement, featuring the brand's familiar blue silicon escape wheel, and offering 70 hours of power reserve and a daily accuracy of +15/-5 seconds. 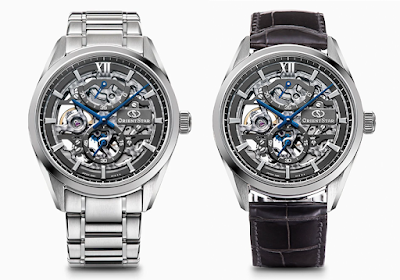 The JDM version of the watch (ref. RK-AZ0102N) is bundled with a leather strap, in addition to the steel bracelet. The global market version, ref. RE-AZ0101N, does not include the strap.

The Orient Star Contemporary Skeleton is around 2,300 USD at the current rate of the Japanese Yen, making it the most expensive model on the brand's current range. It seems fairly steep in comparison to most Orients; but judged based on its (claimed, till we get to see it…) quality of execution, it makes sense.