A catchy title might have been "Orient's got the blues" but there's nothing sad about this, on the contrary: Orient are launching 7 (!) new models – or rather, versions of existing Orient Star models – that proudly wear gold and blue as a symbol of global connection, since – as Orient puts it in its recent announcement – Blue is the color of the sky and the sea which connect the world. 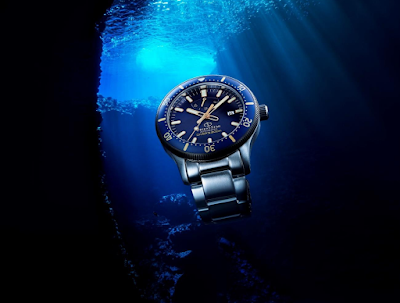 One of the models that stands out (and got a separate announcement by Orient) is a version of the new Orient Star diver. Reference RK-AU0304L features a blue dial and bezel, gold-toned markers and hands, and – unique to this reference – the bezel sides are blackened.

This model is priced slightly above the other members of its family, probably as it comes bundled with both steel bracelet and a divers' silicon band, and due to the blackened bezel. Orient limit the new model's production to 1,200, of which 500 are allocated for the domestic Japanese market.

The other six models did not get an announcement of their own, but they are definitely nice enough to deserve attention. 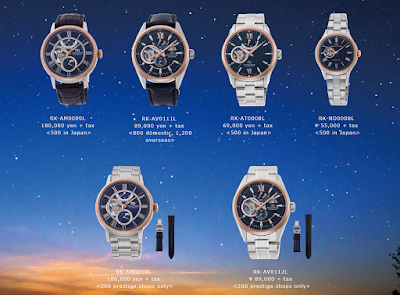 Orient's "Modern Skeleton" will also get a couple of versions. Ref. RK-AV0111L, offered on leather, will be limited to 2,000 units (of which 800 reserved for domestic market), while 200 units of Ref. RK-AV0112L will be packaged with a bracelet and a strap and sold in Prestige Shops.

Finally a pair of semi-skeleton models would be offered, for "him and her": ref. RK-AT0008L is based on Orient's contemporary open-heart model, while ref. RK-ND0008L is a new version of Orient's classic ladies' open-heart watch. Each of these is limited to 500 units.

The blog's verdict: any addition of blue and gold to the line-up is welcome, and seven new additions are particularly so. The new diver is definitely a looker and is expected to be the favorite of many, and the new color combo also works very well for the contemporary semi-skeleton.

Now – maybe it's time for some other colors? Not enough grey dial versions on the line-up, we think – and it's definitely time for more yellow on those divers!