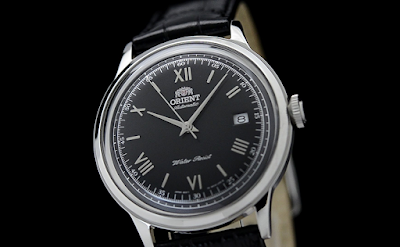 The Bambino has been one of Orient's commercial pillars since its introduction. We've mentioned certain members of this vast model family on the blog before – but, I thought it would definitely be worth adding a more general post concerning it.

Most readers would likely be familiar with the Bambino in general. It became hugely popular as an entry-level automatic dress watch, offering classic elegance, good overall quality, and an excellent value for money.

Despite the simplicity implied when aiming at dress-watch characteristics, and the variety of Bambino designs, Orient were able to create a very distinct "Bambino DNA": a clean, spacious dial that curves very noticeably toward its edges; and a mineral crystal dome that curves in matching style to the dial.

Indeed, not everyone are fans of the watch, with the most common gripe concerning the case diameter, ranging between 40.5-42mm on most models, whereas many wish it had more old-school dress watch dimensions of 36-38 mm. Of course, for this purpose one may look to the "female" version of the Bambino, which measures 36mm.

Bambinos comes in different flavors, so let's try to put sort them all out. For clarity's sake, we'll only focus on "classic dial" models in this post, and will set aside other variations like the Small Seconds and Open Heart dial.

We will however include the latest 2021 release, despite being new and not officially a Bambino, we will call it "Version 6" (see versions below). Make no mistake, this is a nickname I'm giving it, so you're not likely to find a "Bambino V6" on Google… yet.

You'd notice Bambino's are often referred to by Version and Generation. What does this mean?

Generations is easy. The first, original "Gen 1" used Orient's old non-hand-winding, no-hacking, caliber 48743. A simple and robust workhorse, but now outdated. You can easily tell Gen 1 Bambinos by the writing "Water Resist" on the dial.

The second generation replaced the movement with the newer caliber F6724, offering hand-winding and hacking. And it updated the dial to read "Water Resistant".

The "version" of the watch refers to its overall styling, which (ignoring the "water resist" thing and some added dial colors) remained the same between Gen 1 and Gen 2, for each version. The following illustration explains this best. 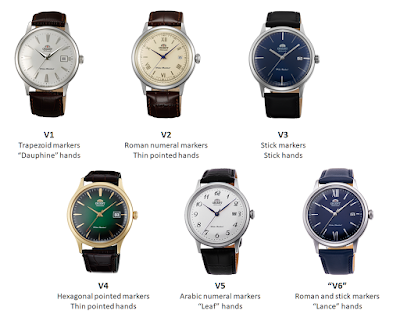 Note that all versions have a case diameter of 40.5mm (without the crown), and the odd 21mm lug width – except, curiously, v4 that has a 42mm case and 22mm lug width.

Also note that versions 1 through 3 exist in both generation 1 and 2. Bambino versions 4 and 5, and so-called "6", were introduced only in the 2nd generation.

And What About The Watch Itself…?

This is all very technical. But how do we feel about the watch itself? Well, worry not. This short post was only an intro to the world of Bambinos. The next post on Orient Place blog will be a proper hands-on review of a Bambino. Stay tuned!

Photos of Bambino models in this review were taken from various Orient catalogs and ads.