As if the new line of Orient Star Skeleton models, with their F8 movement boasting 70 hours of power reserve, wasn’t enough – Orient have just presented a new flagship model to head this collection. At least for a short while – until the limited production run finishes shipping out the 200 numbered pieces. 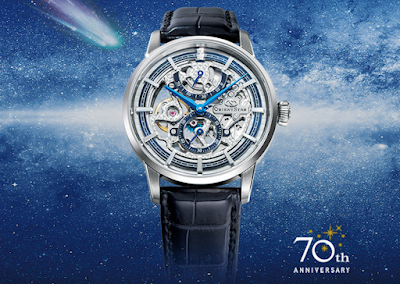 The technical specifications of the new reference RK-AZ0003L are the same as the rest of the collection: the 38.8mm wide, 46mm long, stainless steel case houses the latest caliber F8B63 with its blue silicon escape wheel, and +15/-5 seconds per day accuracy.

The new dial appears to be even more finely finished than the original models (which weren’t half bad too). The minute track and sub-dials get black accents that contrast nicely with the silver tones of the other dial elements. And – whether you like it or not – the 12 o’clock marker is adorned with two diamonds. 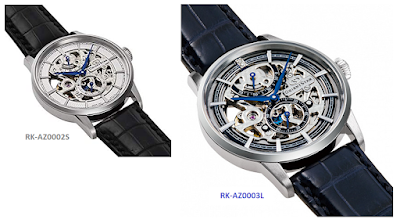 Everything else is pretty much the same, such as the crocodile leather strap with its three-fold buckle, the front and back sapphire crystals, and no doubt – a high level of finishing all round.

For some added interest, Orient named this model “C / 2021 A1”, after a newly discovered comet by the same name, which is said to come close enough to Earth to be visible in the naked eye, sometime in December this year. This watch, however, is expected to be available sooner, in mid October.

The whole thing is now priced around 10% higher than the other references in the skeleton collection, MSRP placing it way above 3000 USD – among the most expensive Orients ever. Will it hold its price? How quickly would Orient be able to dish out those 200 units? Time will tell.