Orient today released a very festive batch of announcements. We’ll focus first on a couple of announcements concerning the release of some very cool models – one from the distant past, one more recent. Let’s start with the more historic one… 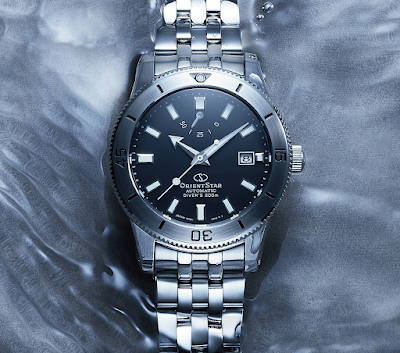 The dimensions of the stainless-steel case are a very modest 40.2mm width (similar to the original!), 49.6mm lug to lug, and 14.5mm thick. The steel bracelet connects to the case with 20mm wide solid end links, double-locks with a tri-fold buckle, and can be adjusted on the wrist using a divers extension.

Front crystal is sapphire, and the case-back is solid, engraved, and numbered. The crown is screw-down, of course, and markers and hands are lumed, as expected from what is designed to be a professional divers’ watch.

Inside the “Diver 1964” is Orient’s familiar caliber F6N47 – with automatic and hand-winding, hacking, a power reserve of 50 hours (including a PR indicator), and stated accuracy of +25 / -15 seconds per day.

Price for this model is around $1,200 USD – not cheap, but it may well be justified considering the limited production and expected high quality. The watch has some very nice, solid esthetics and vintage vibe going for it – so chances are it will sell out quickly.

Whereas the Diver 1964 is an Orient Star reissue of a non-Star model, the new Guitar watch is exactly the opposite… a non-Star reissue of an OS watch. The original Guitar Watch was released in 2013 as part of the Orient Star “Retro-Future” series (which also included the recently revived Camera Watch). It remains a very original and unique design to this day, so a new model is definitely well deserved.

Two versions are being introduced, though both in limited numbers and one – to be sold only as a JDM model. So you get reference RN-AR0302R with the red dial, limited to 300 units in Japan – and gradient-brown reference RN-AR0301G as limited Japanese model (300 units) or RA-AR0303G as an international model limited to 400 units. 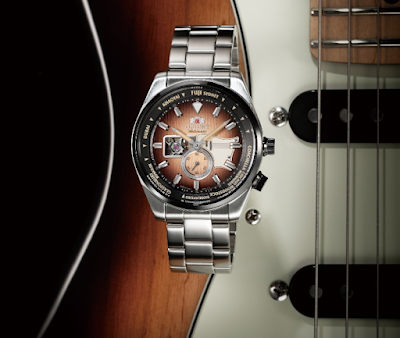 Unlike some of Orient’s other recent reissues, this time it appears the brand focused more on the concept, rather than the specific design elements, of the original. The overall vibe of the Guitar watch was retained, however key differences can be noticed – in the small-seconds sub dial, different hands, and the guitar image itself.

Some cool new features are the “strings” drawn in the international model where before a stylized Orient Star logo stood (in the JDM references this is replaced by the logo of Dyna, a Japanese guitar makers that cooperated in the design of this model); and the 12 o’clock marker, now made of Mother-of-Pearl and designed to resemble a guitar pick. As in the original, the crown at 4 turn the inner bezel, which is printed with names of famous rock festivals instead of the traditional capital cities or airport names. 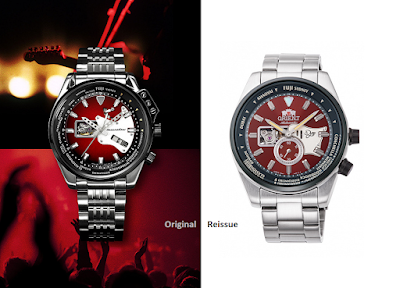 Case dimensions are 42.3mm wide, 48.4mm long, and 12.4mm thick – larger than the Camera watch. Front and (the tiny) back crystals are mineral. Lug width is 20mm, and while this is not detailed in the press release we can assume it’s similar to the Camera watch bracelet – i.e. simpler than Orient Star bracelets and having folded end-links, but hefty and well-made nonetheless.

The movement here is F6S22, featuring 40 hours of power reserve and Orient’s standard +25/-15 seconds per day accuracy. Small glimpses of the movement can be taken through the small aperture at the back of the watch, and the open-heart dial in front.

Either reference is set to cost around $500 USD, which seems sensible – again, given the expected quality and unique design. Another model I hope to see in person soon!