A quote from the press release actually seems to convey the spirit of these watches well: "The concept for the new model designs is 'gentle sunlight', and the dial colors are inspired by the gentle light of the sun shining upon water, plants, and forests. Beautiful shades of champagne gold, forest green, pale aqua, and pearl grey reflect feelings of gentleness and happiness found in everyday life and natural scenery."

A relaxed design for edgy times then… forget the pandemic and the climate, for just one moment, just stare at a watch that makes you calm down while thinking about lush woods. Cynicism aside, I am all for it. So let's take a closer look! 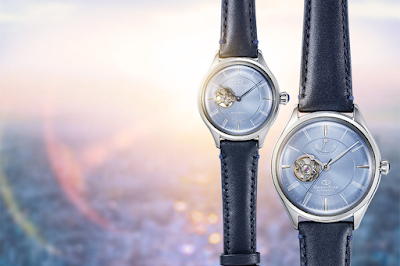 The men's version features a sensibly sized 40.4mm wide, 46.6mm long, and 12.8mm thick case. Lug width is a fairly standard 20mm. What is not standard on an Orient Star, is that both front and back crystals are mineral – not sapphire. Intended perhaps to add some soft warmth to the new design, I'm sure many potential buyers might see this as a downside.

Perhaps as compensation, Orient added a new feature here – a cabochon set in the crown. A somewhat feminine design choice, but nonetheless legitimate (as Cartier have often demonstrated) it does appear to complement the watch. Or – to make it a proper choice for ladies who prefer a larger model? No answer is wrong here, it's all down to personal taste.

Note the first three, non-JDM models are also available worldwide as RE-AT0201G, RE-AT0202E, and RE-AT0203L. Also note that strangely, the Prestige Shop model comes with two brown straps; personally, I would think that one brown and one blue would make a better offering in this case.

Prices for the new Orient Star Classic Semi-Skelton men's models are around 550 USD.

The women's model of the Classic Semi-Skeleton is remarkably (or perhaps – expectedly…) similar to the men's in styling, despite being smaller and somewhat skimpier on features.

The case is 30.5mm wide and only 11mm thick, and lug width is 14mm. Like its bigger brother, it comes with mineral glass front and back. Also like its male sibling, it features a cabochon set in the crown.

Four references are being introduced, which more or less match the men's references – making some obvious "his and hers" gift options.

The movement is caliber 55C22, offering 40 hours of power reserve and stated accuracy of +40/-30 seconds per day. Water resistance is 5 bar (50m). No second hand here, so no second-hand hacking.

Prices for the women's models are around 500 USD.