The multi-year calendar watch has been one of Orient's most popular, and recognizable, models since its first introduction in 1965. Also known, rather inaccurately, as the "perpetual calendar" (though it is not) the original design has been through numerous iterations over the years, some of which were reviewed here on the blog.

Despite seeing some different designs, the original one always wins – and now, Orient are returning to it with a brand new model. This time, on offer are a larger, contemporary case, a new movement based on the F6 family of calibers, and some functional and visual updates. 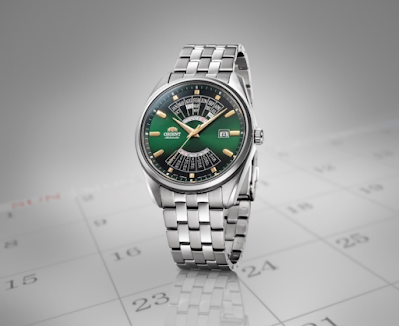 Inside, the new model uses caliber F6D22, an automatic movement featuring hand-winding and second hand hacking – two functions missing from the old cal. 46D40 that was driving the last generation of multi-year calendars. The new movement will be identified with "BA" in the reference, whereas the older models had "EU" in the reference.

The new mechanism allows the multi-year wheel to be moved using the crown, eliminating the need for an additional push button. While not mentioned in the press release, this is presumably done with the crown in the second position, when turned opposite the direction used to set the date.

The new case is a larger 43.5mm wide, compared to the 42mm case of the "standard" previous model – as opposed to the "GMT" version with the 24 hour ring, which was in fact more than 44mm in diameter. The new case measures 50.2mm lug to lug, and is 11.5mm thick.

One can see the evolution of the multi-year calendar design below: the leftmost is the first version from 1965, then follows the previous model, and on the right is the newest version. 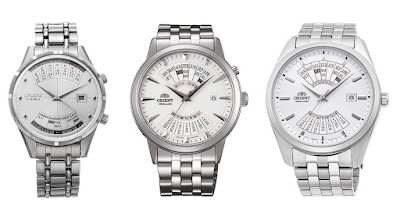 Today, Orient are presenting six references of the new model: 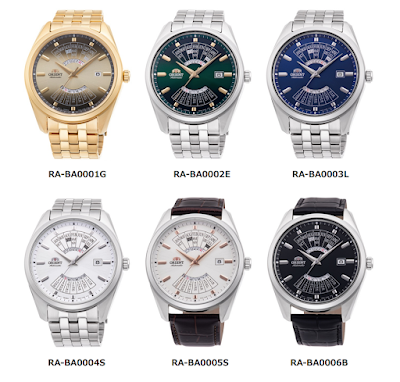 This is a nice addition to Orient's line-up, with a long overdue movement update. The new watches should keep fans of the multi-year calendar design happy for some years to come… prices have not been announced yet, but should not differ much from the previous model.