The latest generation of Orient Star Classic Semi-Skeleton watches was introduced about three months ago. Shortly afterward, Orient presented a limited-edition version of that model, featuring a deep blue dial adorned with little sparkles. This model, reference RE-AT0205L (or RK-AT0205L in Japan) is the subject of today's review. 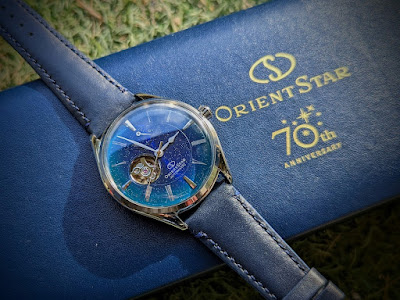 The new semi-skeleton immediately stands out among other members of the Orient Star Classic line-up. Whereas the rest of the crop feature lugs that project very markedly from a round case, here the case and lugs flow together seamlessly.

Somehow, this flowing shape makes the watch look radically different from its predecessor. Despite the familiar Orient elements, like the power-reserve indicator and (obviously) the open-heart aperture, the overall feel of this timepiece is very un-orient-like. 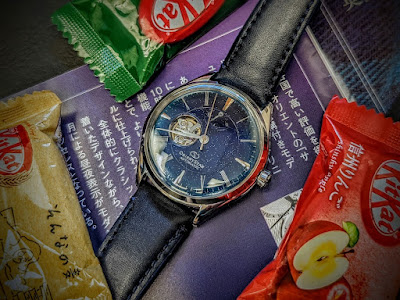 More precisely, it is unlike most men's Orients. Its design makes more sense when viewed next to some of Orient Star's recent ladies models: that's where you will find more of these smoothly flowing cases. Now add the cabochon, set into the crown of the new Semi-Skeleton, and it becomes clear this isn't less Orient-ish than past models, it is just a little less masculine.

There's nothing wrong with having a watch that is more subtle in its gender specificity. Looking at many classic Swiss dress watches, you can appreciate that their styling is actually more unisex than either male or female. Quite possibly, it was this timeless European elegance that Orient's designers were aiming for. 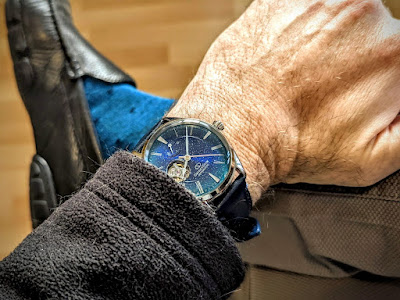 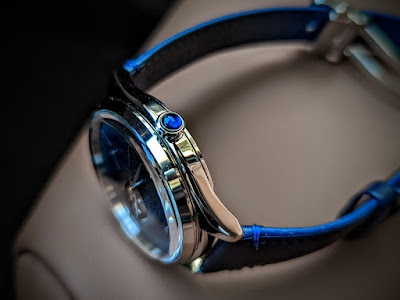 And elegant it is. Polished all over, with that domed crystal covering the blue dial with its elongated markers and hands. The power reserve indicator is less pronounced than in most other Orient Star semi-skeletons, so there is no apparent need to counter-balance it with a small-seconds sub-dial at 6. The centrally mounted second hand is therefore well fitted here.

Now, many readers would, at this point, likely complain about the open-heart. A common claim is that many Orient watches would look better with a full dial. Well, I tried to simulate what this model would look like if it was not a semi-skeleton; well – I don't know, it just seems less interesting to me. More classic dress watch perhaps, but we've got plenty of those, right? And then it wouldn't be an Orient. 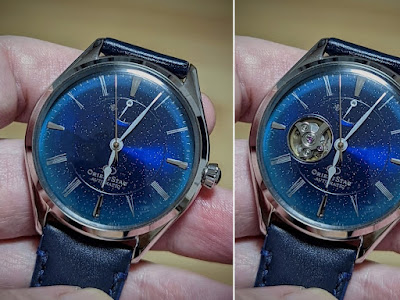 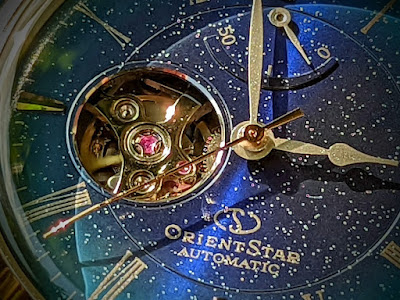 The dial looks particularly fine when some stronger light shines on it. Then, the navy blue dial becomes more vibrant, revealing lighter shades and even some greenish hues around the edges. The flat hour markers wear warmer tones, and those tiny dots begin to glitter.

The hands and applied markers aren't the sharpest I've seen on an Orient Star, but they are still nice enough. Overall, the dial just works – it is well balanced, and is as elegant as the case. 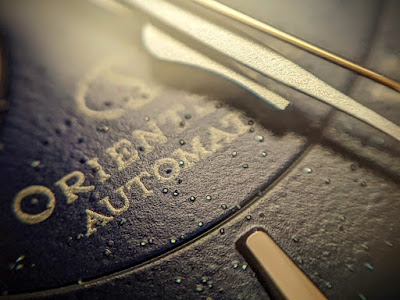 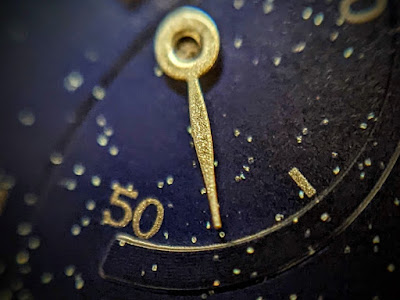 This Orient Star makes for very comfortable wear, thanks to its moderate dimensions, smooth case, and well-made strap and buckle.

It is a tad larger than the previous model: case width is 40.4mm without the crown, length is 46.6mm, and thickness is 12.8mm. The watch weighs 74g on the strap – considerably less than, say, the 90g of the layered skeleton on leather. 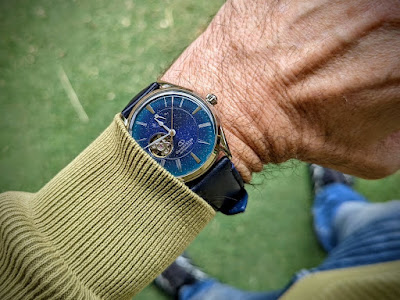 These dimensions make it a fairly versatile watch – it would wear perfectly on wrists 6.5"-7.5". I reckon it should still be comfortable on 6" wrists as well, though it would look a bit on the larger side, and therefore perhaps more sporty and less dressy.

The 20mm strap supplied with this watch is of good quality (and has a very strong leather odor when unboxed, which I like). It was initially a little stiff, but did not take more than an hour or two on the wrist to break down and become flexible enough – while being nicely padded and not overly soft. 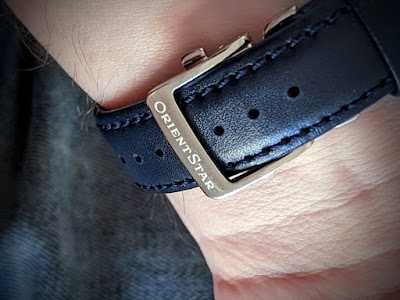 The folding buckle attached is also well made. I've seen it before on Orient watches, and it really is good – it feels secure, easy to use, and very smooth and unobtrusive on the skin. 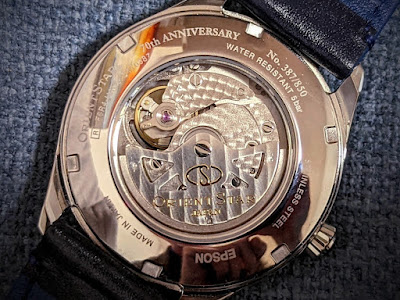 Checking the time on this watch is a simple affair. The hour and minute hand contrast clearly against the dark dial. Thanks to this, low light legibility is more than acceptable for a dress watch, despite having no lume on the hands or markers.

Crown operation is decent, though a slightly larger crown would have been more convenient. Winding feels a little rough, as in some Orient watches, but setting the time is a breeze (as would be expected). 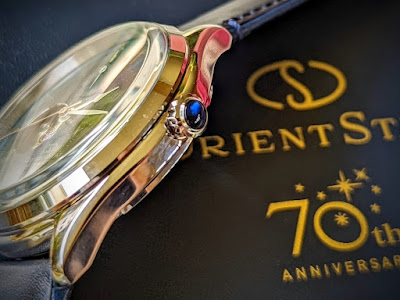 As far as everyday usability, this is a dress watch and should be treated as such. The highly polished case and non-sapphire crystal are not intended to be worn working in the silver mines, and the 5 bar water resistance means you are not going to go shark hunting with this watch, either (by the way, I strongly recommend against hunting sharks anyway).

The new Orient Star Classic Semi-Skeleton is a handsome watch that takes a slight diversion from the familiar design lines of the brand. It's not just the case that is more polished, it is the whole concept. In this respect it is somewhat reminiscent of the Orient Star Diver, as both watches do not ignore the traditional aspects and DNA of the brand, but instead deliver them in a more rounded package, possibly aiming to attract buyers outside the existing circle of fans.

Whether one likes the new design or not, and whether one prefers it over the old styling or not, is totally subjective. What is objective, is that the quality is definitely there – the mechanics are sound, the finishing is fine, and attention has certainly been given to little details such as can be found on the dial and crown. 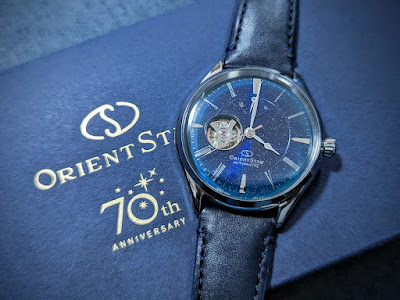 The new model can be found online nowadays at around $500 USD, slightly below the official price. This is about 100 dollars lower than current asking prices for the previous model (ref. RK-AV0011L would be the closest in terms of dial color).

This represents good value, whichever way you look at it. Indeed the lack of sapphire may be offputting to some, but I understand that Orient were looking for a warmer, old-school vibe here with that purposefully domed mineral glass. Clearly, when Orient wants to put sapphire in their watches they do it, at almost any price point.

Bottom line is, if you find the new design attractive, you are likely to enjoy this watch. There is nothing wrong with it – it is comfortable, legible, and well-made. And if you find this limited edition's dial too glitzy for your liking, there are three other versions to choose from.

The blog would like to thank Orient – Epson Europe for providing us this limited edition Orient Star Classic Semi-Skeleton watch for review.