In the mid-1960s Japanese watchmakers waved the white flag and admitted Orient had won the jewel-count battle with its Grand Prix 100. The industry then went on to discuss more important matters, namely: who makes the thinnest watch movement.

At the time, Citizen held the record for the world's thinnest mechanical three-hand movement, the hand-wound cal. 0700. But then automatic winding became favorable with watch buyers, and so the next challenge was to build the world's thinnest self-winding movement. Orient embraced this challenge. 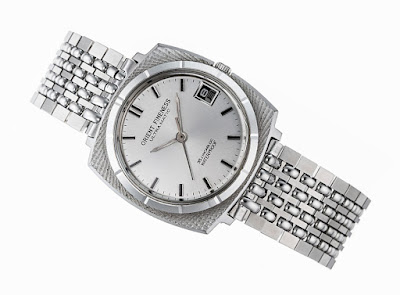 In 1967 Orient introduced caliber 3900, so named for its thickness: a mere 3.9mm, less than the competitor – Citizen's 3.98mm thick caliber 54. A tiny difference, but one that took Citizen 5 years to overcome. And so, it took the crown for the world's slimmest automatic day-date movement.

Cal. 3900 boasted 35 jewels, and was equipped with the latest advancements (at least those that could be fitted in), such as a bi-directional winding mechanism and incabloc shock absorption.

The new movement was placed inside a special new model – the Fineness Ultramatic. Featuring a uniquely shaped cushion case with sharp edges that emphasized its slim profile, this watch really stood out from the crowd. The case was 33mm wide, and its overall height including the domed crystal was about 8.5mm. 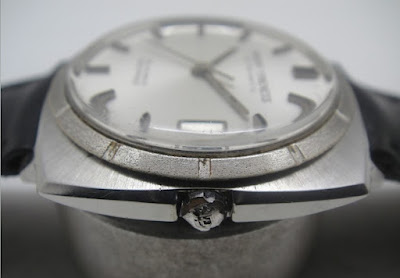 Another feature that set the Fineness apart was the unusual layout of the day-date wheels, which enabled both day and date to be viewed through a single aperture, one on top of the other. This helped avoid unnecessary clutter on the already small and fairly crowded dial.

A number of variants of the Fineness were released followed that early, silver-dialed model, including a dark dial, and a gold-plated watch.

The Fineness was also priced competitively, with basic models selling just below 20,000 JPY, and the gold plated version priced at around 22,000 JPY. Comparable models from Citizen, such as the Super Crystal Date and Chronomaster cost thousands of Yens more. These were all pretty high-end wristwatches mind you, costing more than most King Seiko models at the time. 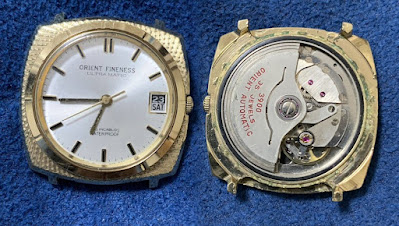 In 1968 a new Fineness design was introduced, set in a larger round case, measuring 36mm across. A "cyclops" was added to the crystal to assist in viewing the small print of the day and date.

Like the earlier model, this model too was mainly offered with a silver dial but also had darker colored versions. Variations also included a dial with Roman numerals, in addition to the more common stick markers. 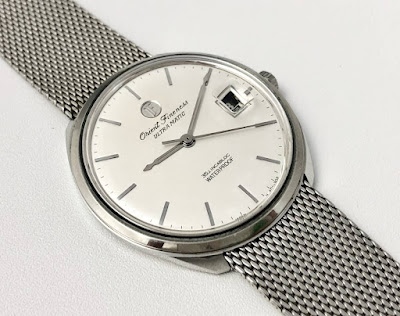 An even rarer model of the Fineness was introduced later on. This time Orient returned to the cushion form factor, albeit in a larger and slightly elongated shape, measuring 36mm across.

This final version of the watch was equipped with the latest iteration of the movement, caliber 3991, and a push-button at 2 to enable quick date setting – as opposed to earlier releases where the date had to be set by moving the hour hand back and forth across midnight. 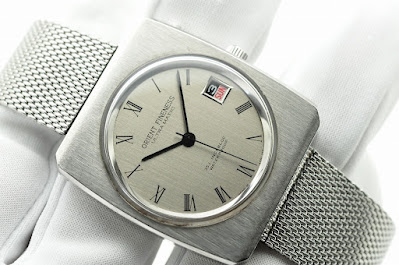 And then, as the decade was ending, things took another turn. Orient entered into an even hotter fight than the one for thinner movements – that focused on faster movements. With limited resources, no further work was done to push the limits of slimness.

In 1974, Citizen introduced the 3.73mm cal. 8001A, and returned to the top of the podium of thin day-date self-winders. As the battle for thinner movements continued, it eventually got completely taken over by the leading Swiss brands.

Citizen later focused on thin quartz movements, and Orient returned to concentrate on what it did best, which was producing reliable, serviceable, decently accurate workhorse movements for affordable watches.

Photos in this post were taken from various old Orient publications and sale ads.

Email ThisBlogThis!Share to TwitterShare to FacebookShare to Pinterest
Labels: Fineness