For more than three decades, Orient has been experimenting with different skeletonized and semi-skeletonized designs, making skeleton watches one of the hallmarks of the brand. One of Orient's newest skeleton models recently arrived at the blog's desk for review – it's the Orient Star Avant-Garde!

Specifically, we are looking at the blackened reference RE-AV0A03B (RK-AV0A03B in Japan). 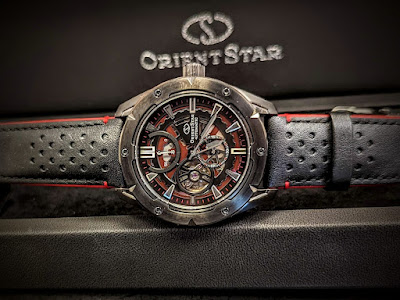 The Avantgarde skeleton makes an immediate impact when you lay your eyes on it. It's the sort of design that looks very intriguing in pictures, but makes you wonder how it would work in real life. Will it be confusingly overloaded with details? Can so many visual elements live together in harmony? Well, thankfully, the easy answer is: this thing looks good!

Besides just "looking good", a number of more specific words come to mind when looking at this watch: sporty (well, it is part of Orient's sporty line-up); elaborate; industrial. Its esthetics don't seem to stem from any particular Orient model.

Some similarities can be drawn between the avant-garde and Orient's Retro-Future watches. Still, there's also something very Jean-Claude Biver about this skeleton, a little Hublot, a little (or much) Tag-Heuer Carrera Calibre Heuer 01. 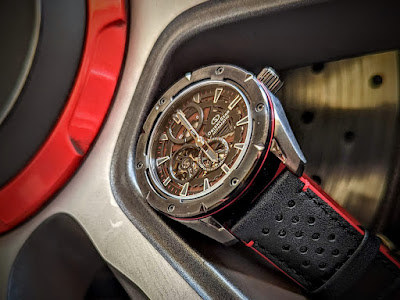 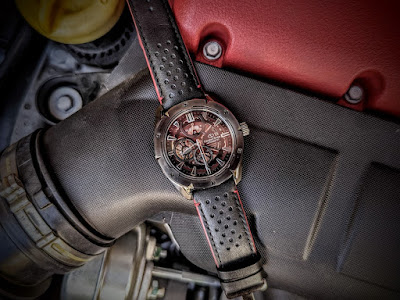 The design of the Avant-Garde Skeleton is supposed to be inspired by automotive parts, but I find this to be a fairly abstract influence. However, the overall "mechanical" look of the watch works well as a skeleton, and the outer shell of the watch connects very naturally with its inner workings.

The dial (or what's left ot it) is nicely laid out, with small seconds at 6 and the familiar power-reserve indicator at 12. At 9 is what would be the open-heart cutout if this was a "semi-skeleton". The circles that mark these three elements make up the top layer of the display, along with the big, bold hour markers.

Below this layer run the minute track and the logo plate, and underneath these two blackened layers is a dark-red/brown plate. Beyond this tier, you can see the actual movement. Note that you don't actually see much of the mechanism, and you cannot see the back of the watch through it; in this sense, it's not really the movement that is skeletonized – it's the dial. 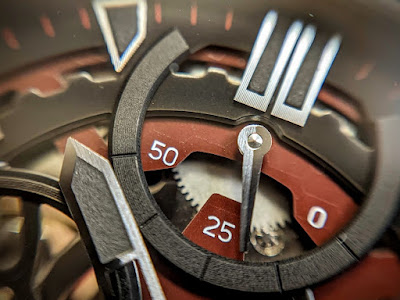 This multi-layered construction successfully creates a sense of depth, and results in a watch that's very interesting and fun to look at. The metallic components of the movement shine from beneath, contrasting against the darker elements above it. This color scheme just works.

Examining the dial under the magnifying glass does not lessen the impression, as almost everywhere you look there would be layers and angles. The level of execution is very good, and while perhaps not threatening any high-end Swiss watchmaker, it definitely lives up to Orient Star's reputation and standards. 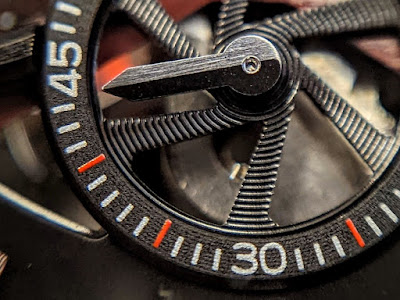 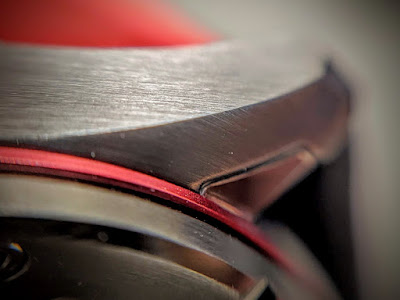 Compared to the intricate dial, the case is fairly simple but is well made. The black IP coating somewhat blurs the finishing, but when observed closely, its quality can be seen – as well as the subtle differences between the matte and polished surfaces.

The bezel, though, is far from plain, with its grooves and notches. Sitting atop a red aluminum ring, it matches the dial perfectly. 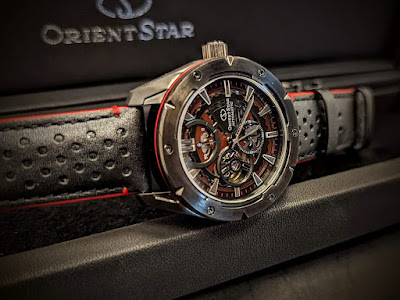 Considering these dimensions it feels quite comfortable on the wrist. This owes to the classic case design with its flat back and arching (and not too long) lugs, and is aided by the leather strap.

The strap is good quality calf leather, and properly padded. As with most padded straps it is initially tough, but should soften after a short period of use. The upper layer is perforated and painted black, while the bottom is red and smooth. So it doesn't just feel good, it looks very sporty as well. 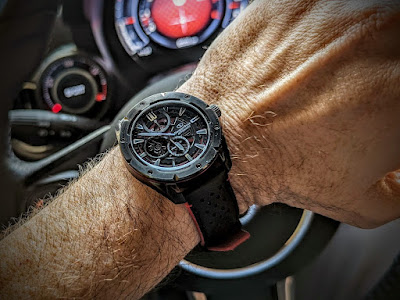 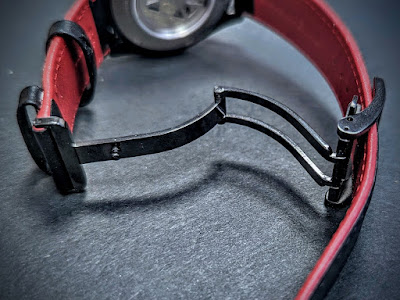 One thing worth noting is the rather unusual length of the strap, as the two pieces are 60mm and 140mm. Normally you'd find strap lengths to be something like 80/120 on average. As the short band is shorter than usual here and the long is longer, it means you'll see more of the strap's end hanging outside the loop, and the thinner your wrist (even at a normal 6.5" – 7" circumference) the longer the overhang.

Attached to the strap is Orient's standard folding clasp. It is easy to operate, and locks confidently. Its underside is smooth and slim enough so as not to create any discomfort on the wrist.

Note that the lug width on this watch is 21mm. I wouldn't call this "non-standard", but admittedly many stores might not hold 21mm straps in stock. There are plenty of compatible straps available online, though, and to be honest, that's where I'd look for replacement bands anyway – the range of options is just so huge, why limit yourself to what you'd find in one shop?

Overall, the wearing experience with the Avantgarde Skeleton is comfortable, at least if your arms aren't too skinny. As is often the case with models referred to by Orient as sporty, this watch may look a bit too much on wrists under 6.5". So while kids might be fond of its playful looks, this is a watch for grown-ups. 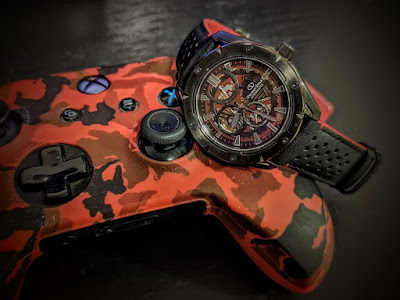 Now we're getting to the business end of things. How does this watch perform its job? Most importantly, is it as illegible as too many skeleton watches, or could one actually look at it and tell the time?

Well, here is the good news: yes, you can tell the time on the Avantgarde Skeleton! Partly because it's not a see-through skeleton, and partly because of the cleverly made hands and markers, legibility is pretty good. For a skeleton, that is... 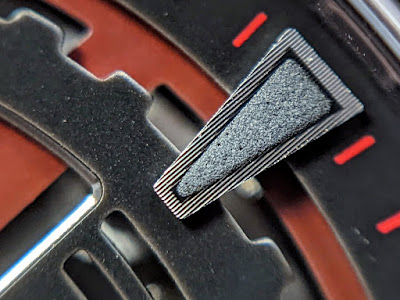 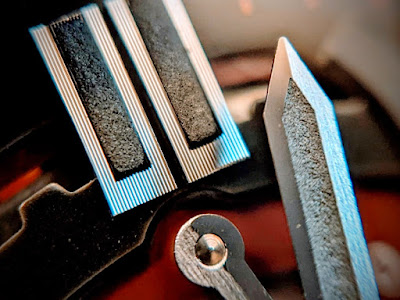 Both the hands and the jagged surfaces of the markers are shaped to reflect light coming from different directions, making them stand out against the mostly dark background. The result is a watch-face that makes time-telling really easy, despite the holes in the dial.

The second hand is a little harder to spot, but as it similarly reflects the light in both directions it does not get completely lost. All this however becomes irrelevant in a dark environment, as there's no lume in this version (some other references of the Avantgarde Skeleton do have lumed hands). 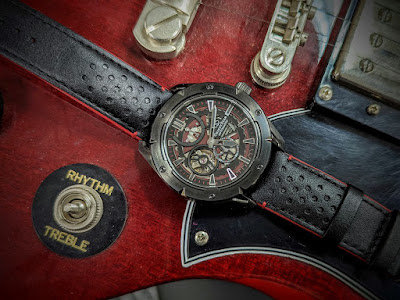 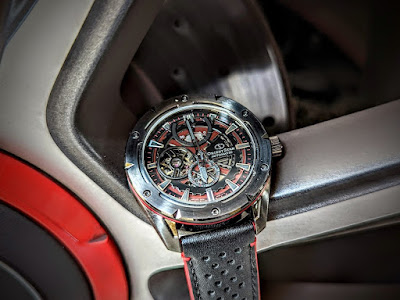 What lies behind the dial is Orient's in-house caliber F6F44, featuring 50 hours of power reserve and an official accuracy of +25/-15 seconds per day. The review unit tested to run just 11 seconds fast per day.

The crown feels firm. It's a little heavy to unscrew and turn, but appears to be well engineered, and slides onto its threads with precision. 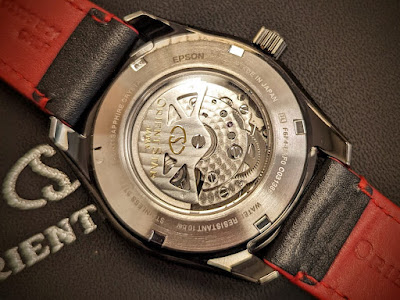 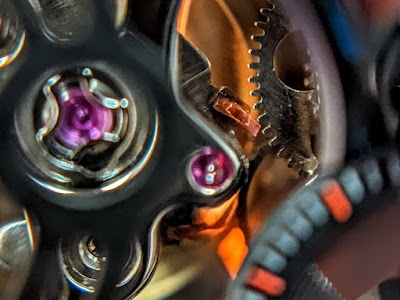 The watch is water-resistant to 100m, making it perfectly capable of withstanding the occasional splash of water. That said, if one intends to take it for a swim, an aftermarket rubber band would be recommended (or just choosing one of the other Avant-Garde versions that are fitted with a steel bracelet).

The front crystal is sapphire, so overall durability should be fine. Plus, the sort of rugged design featured here can take a few scratches without losing its charm. It's a watch that does not need to be treated too gently and should be perfectly fine serving as a beater.

The Orient Star Avant-Garde Skeleton is a cool timepiece and very easy to like if you're into sporty, rugged-looking watches. While one can think of some other watches it resembles, it still looks fresh enough. Combined with the excellent quality of materials and finishing, this provides a great wearing experience.

Some downsides noted are the rather non-standard strap length and nonexistent lume. Both of these shortcomings can be resolved if you opt, for instance, for reference RK/RE-AV0A01B, which features lumed hands and markers, and comes on a bracelet. But then again, the stealthy dark looks of the RK/RE-AV0A03B have a charm that's hard to deny! 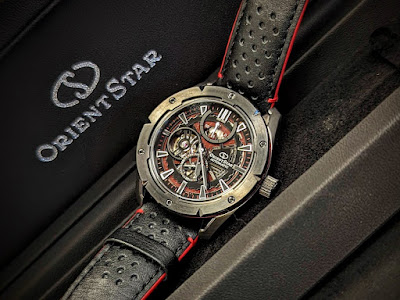 The official price for the Avant-Garde Skeleton is around USD 900, but it can be found online for around 750-800 (and yes, I know you can also find it for much higher on some websites…).

It's more expensive than other relatively elaborate Orient Star models like the Layered Skeleton or the Semi Skeleton Diver, but I feel the complexity of the design and construction of this model justifies the added cost. It's also more expensive than the somewhat similar aforementioned Retro-Future Camera – but you are getting higher specs and more intricate construction in this Orient Star.

The blog would like to thank Orient – Epson Europe for providing us with this Orient Star Avant-Garde Skeleton watch for review.